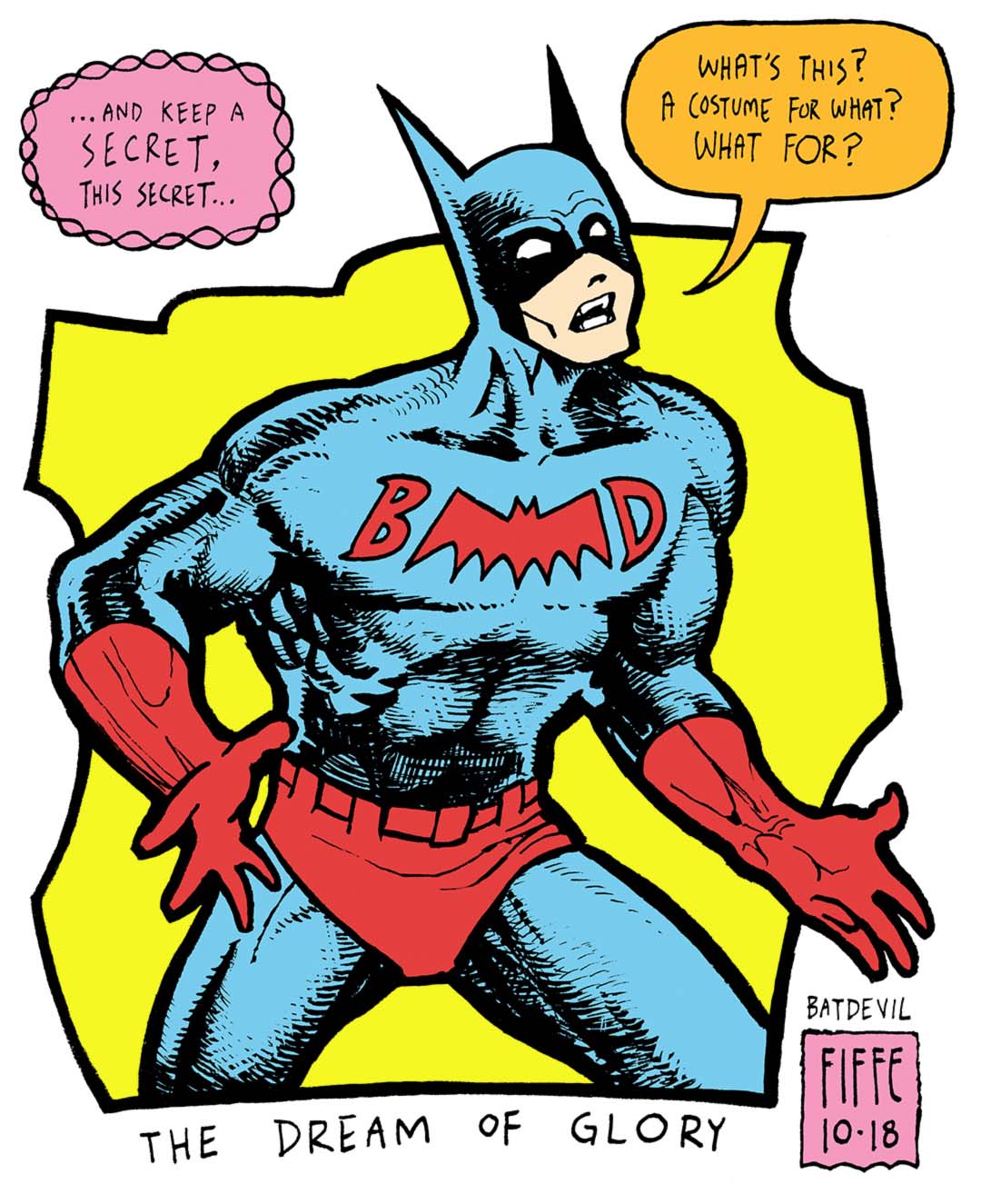 The dozen or so comics I acquired while living in Madrid as a child were my very first, but my fascination slowed down when I moved back to the states. It was rekindled, however, by a few choice multi-packs. Fascination then became obsession thanks to this 7-11. 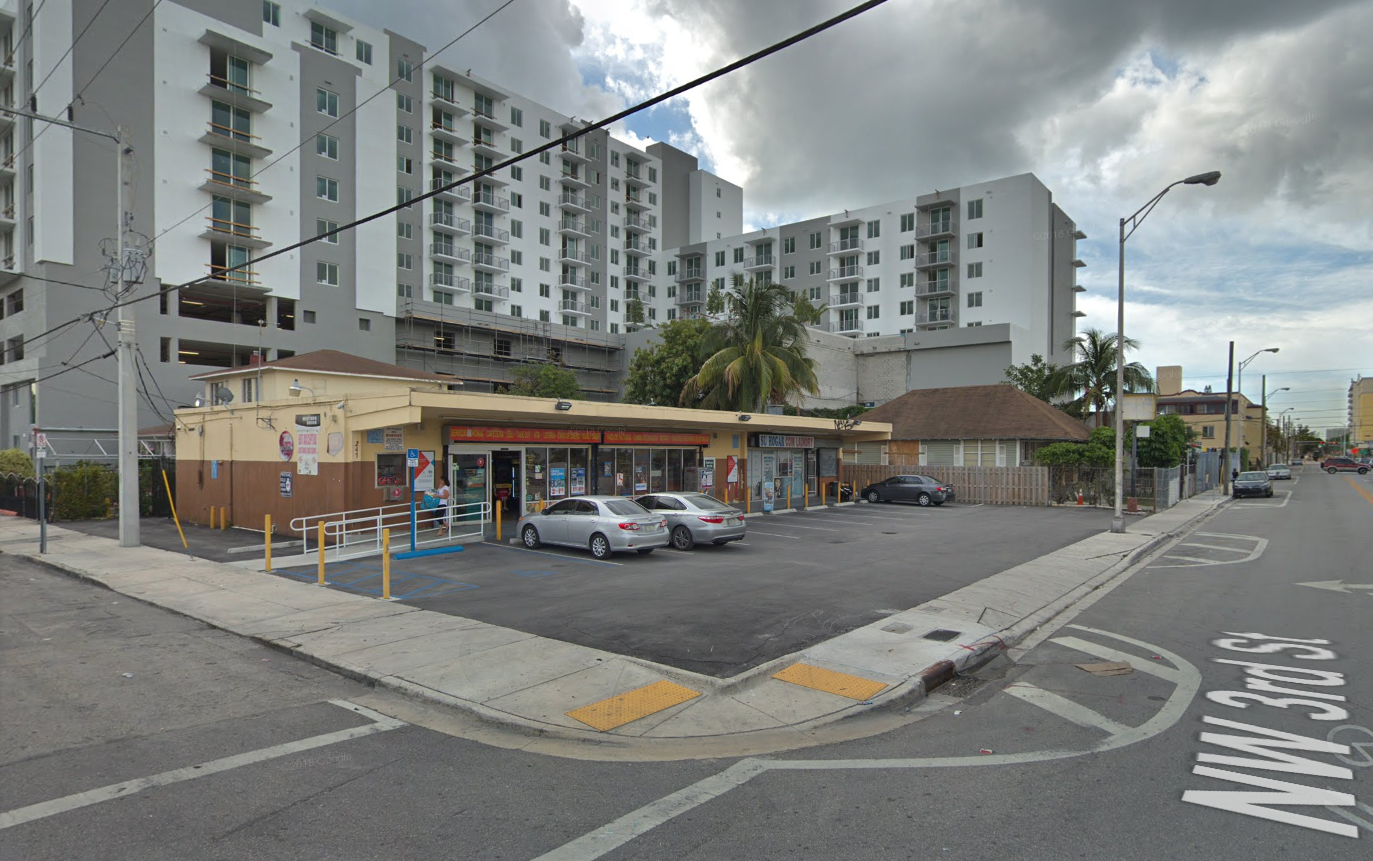 Well, it used to be a 7-11. It was eventually turned into a Circle K, and now it’s just another bodega in Little Habana, Miami. But back in 1988, that’s the location (picture it without the gray building behind it) where my mother bought me thirteen comics in one shot around late March, early April. I was about to finish 3rd grade and this baker’s dozen (see below) hit me at the perfect moment. I thought the Avengers issues were okay and was less impressed with the X-books; they seemed like super involved soap operas with very little superhero action. Gun-wise, I glossed over the G.I. Joe stuff in favor of the Punisher stuff. First Baron, Nowlan, and Mignola. 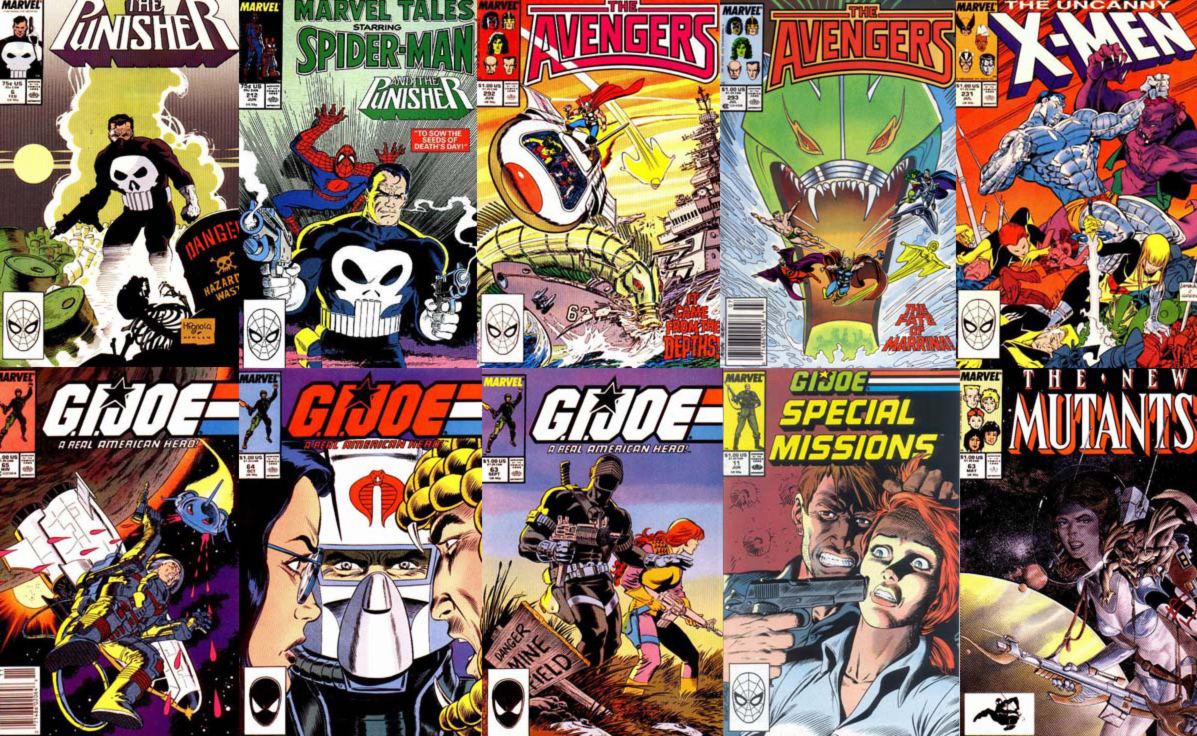 Then there were three. 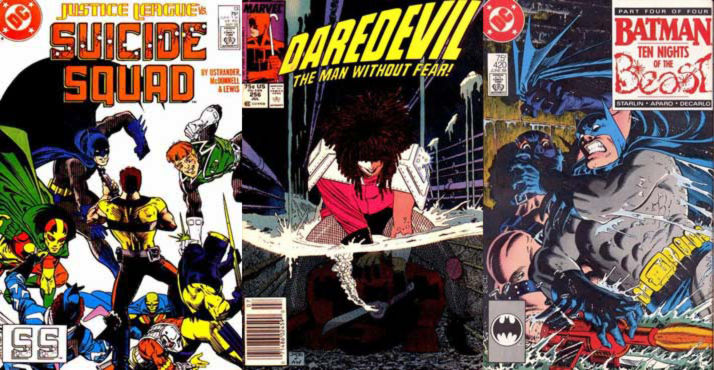 First John Ostrander, Luke McDonnell, Ann Nocenti, and Jim Aparo. To say this holy trinity made a lasting impression is an understatement.

Batman I already knew, but this was the most exciting Batman comic I had ever read up to that point. It’s still up there. John Romita’s art in Daredevil #256 looked nothing like his earlier Iron Man stuff I was familiar with — it was stylish, powerful, better. And Suicide Squad #13… super-powered battle in a Russian prison? Sold. These three comics were not only really fun to read and re-read, but they also got me to start drawing again. The Squad’s influence can be seen in my Deathzone! post, but as for my Batman and Daredevil influence… 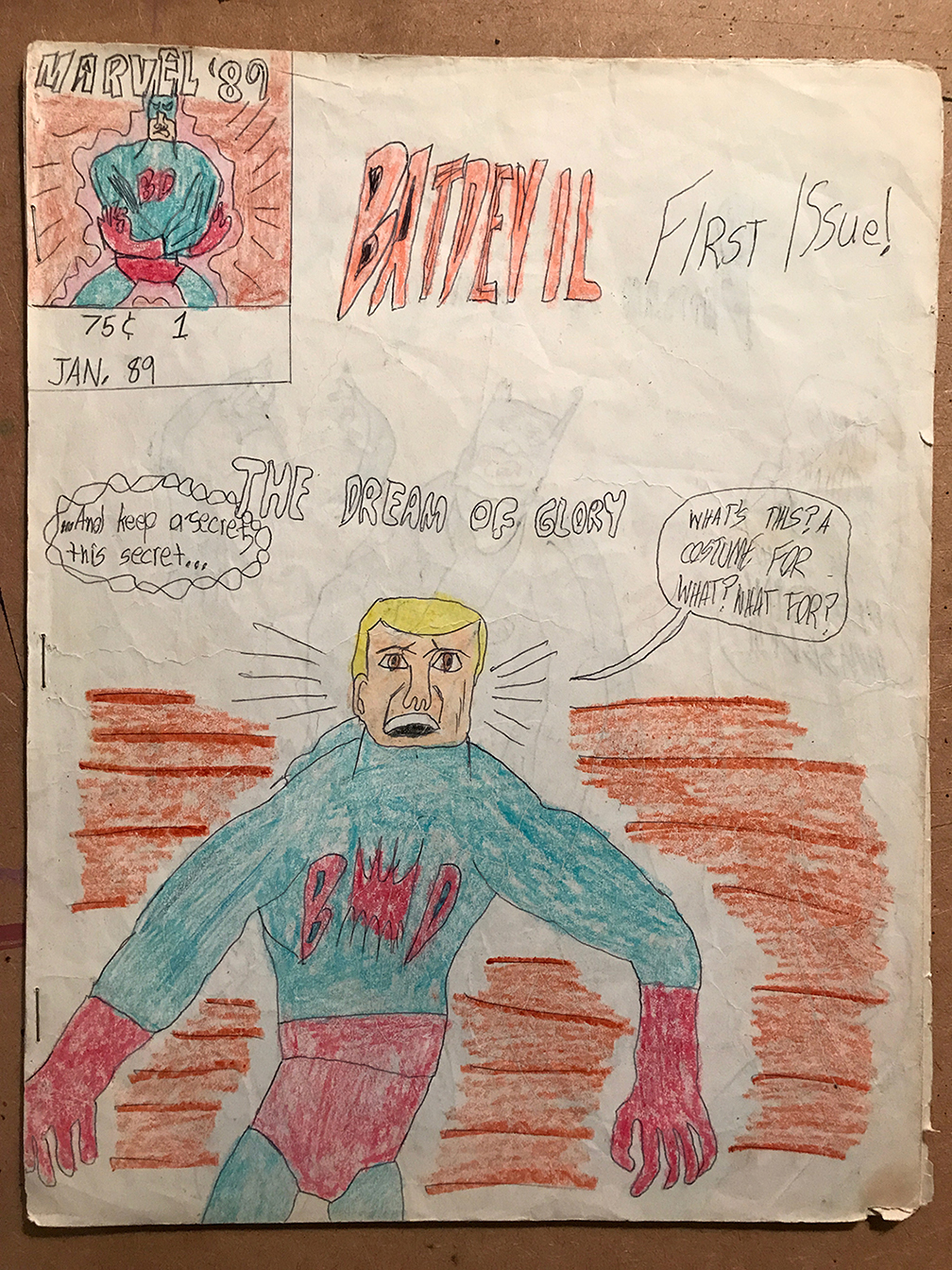 Batdevil #1 was full color (for the first 2 pages only), featured ads for other comics, and had a January 1989 release date. I noticed comics had advanced dates on the cover, and I thought going way into the far off future-time of 1989 was about the raddest thing I could do. Playing it fast and loose with OPP this early in the game – Daredevil himself made a guest appearance. Published by Marvel ’89, natch. 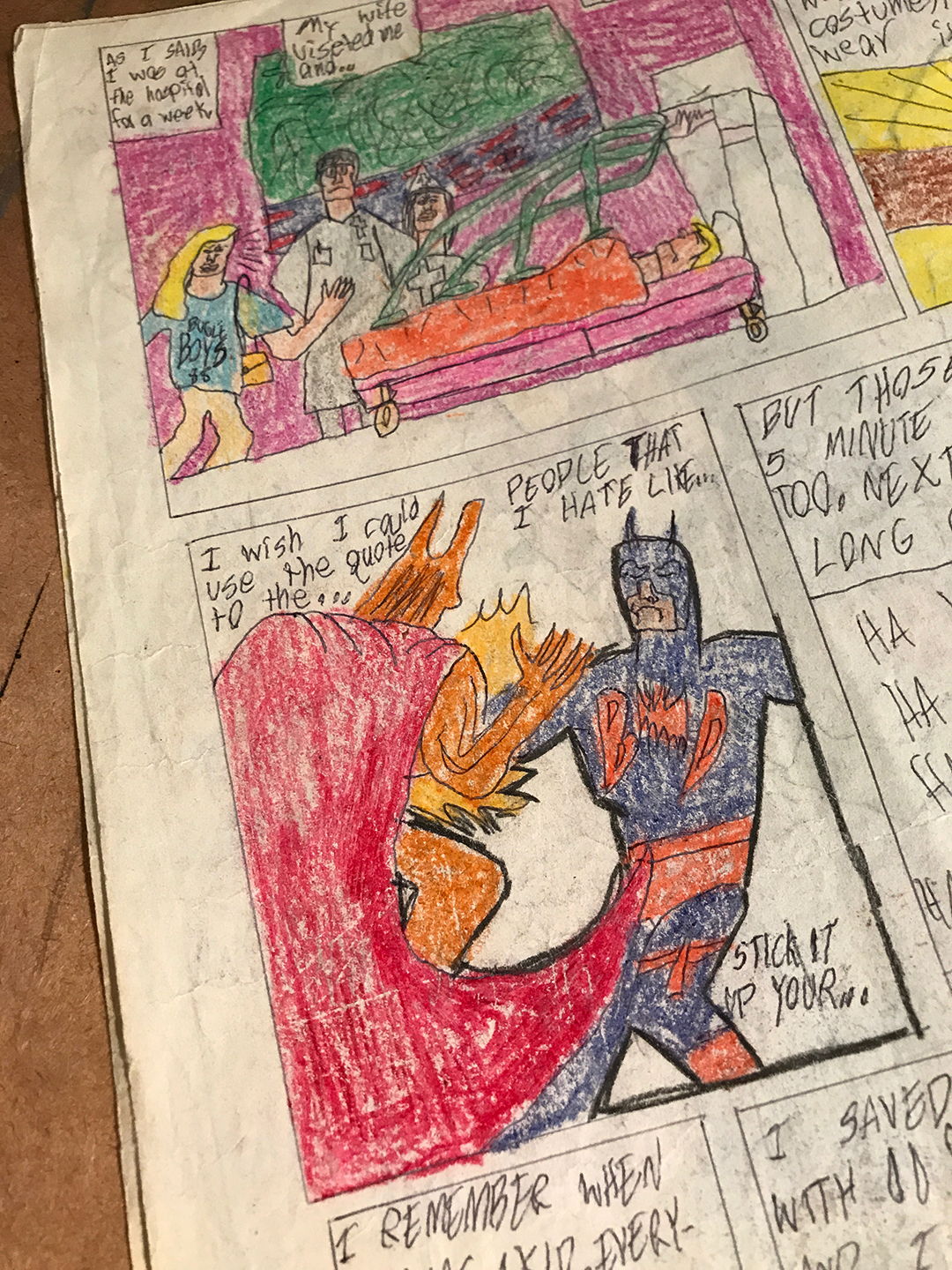 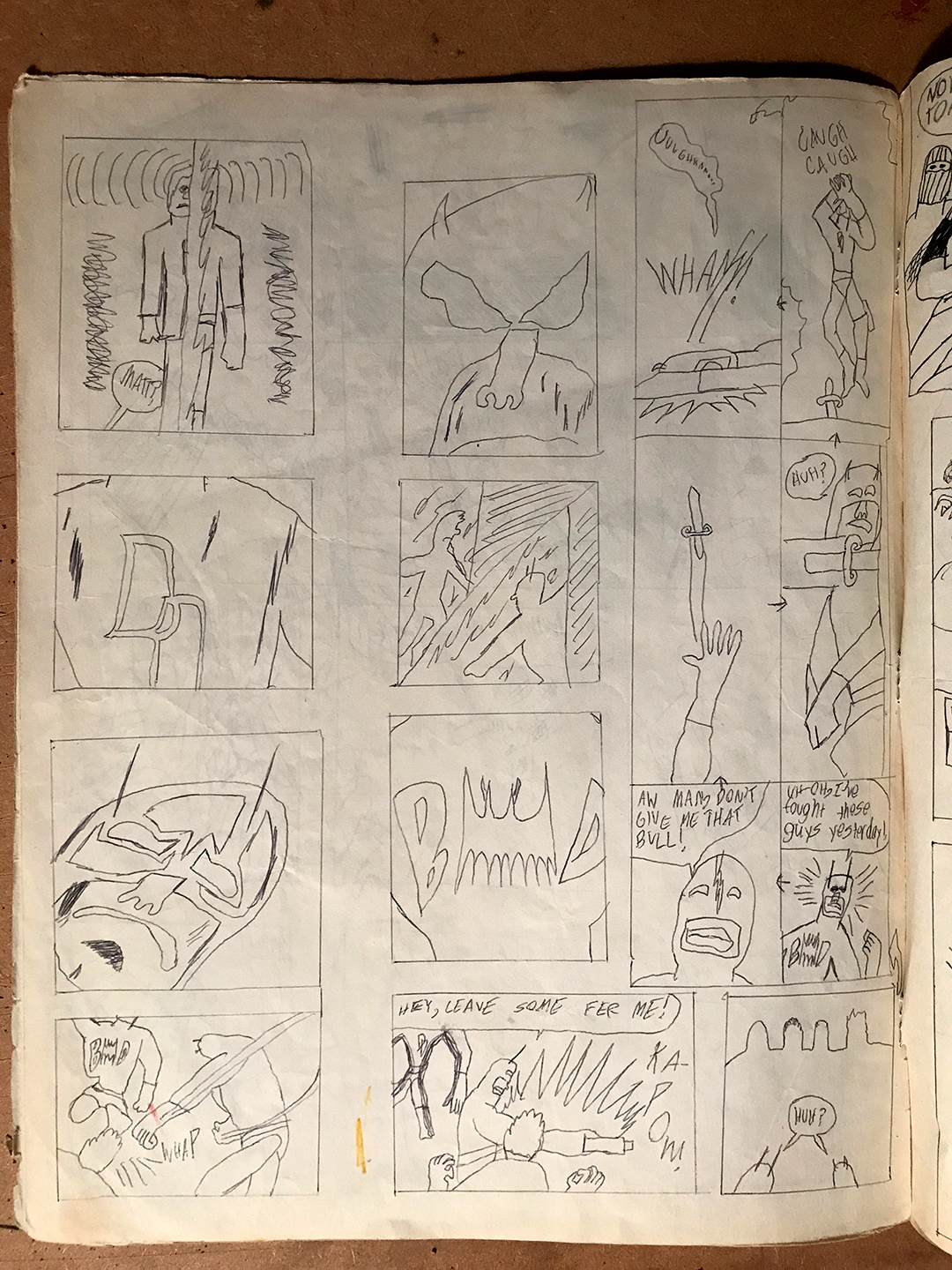 Before the Summer of ’88 hit, my neighborhood buddy, Alex Perez, also had some comics that I had never seen. Alex was another little Cuban kid, had a sister and a single mother who was blind. He once “accidentally” shot me in the neck with a BB gun! The pellet first ricocheted off the wall and into my neck, but still — that fucker was aiming for my head, probably. One hospital visit later, we were still buds. I wonder where he’s at these days, but you try looking for an “Alex Perez” online — that’s the hispanic equivalent of John Smith.

I digress. I had to have Alex’s comics. I traded some toys for them. He got the short end of the stick. 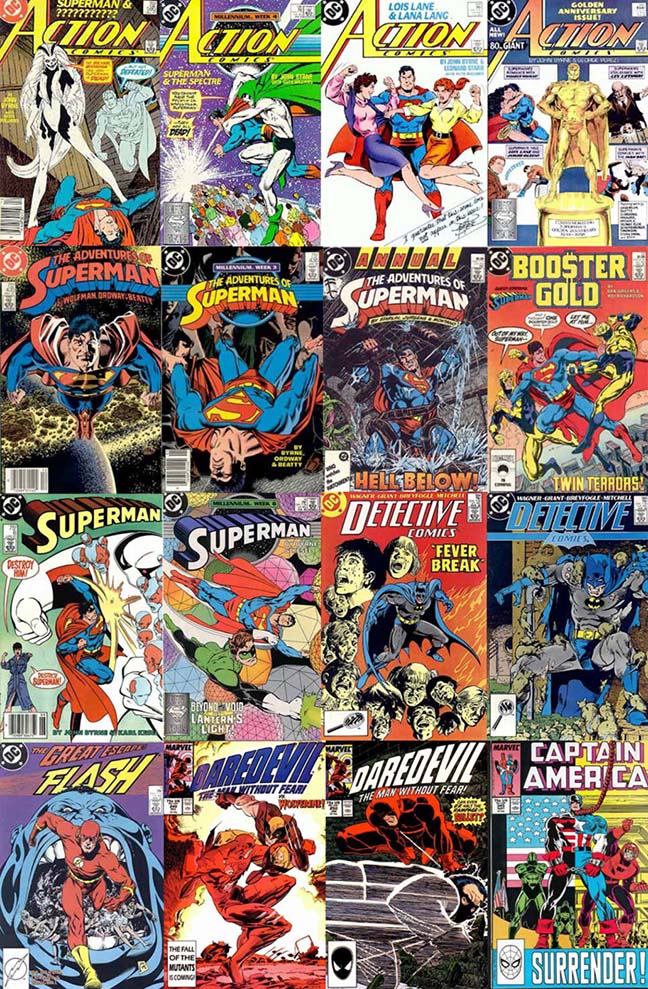 First Norm Breyfogle, Jerry Ordway, and Dan Jurgens. This batch is the reason for my extreme fascination for this era’s Superman comics and cemented John Byrne as the premier Superman artist. I really liked Captain America #345, and y’know… I might’ve become an X-fan if the X-comics had a badass killer Wolverine drawn by Rick Leonardi in them. Instead it just made Daredevil cooler.

I kept drawing and making comics. Created more characters, Death Man (Superman analogue) and Killer (Punisher analogue). Here’s a comic I never made a cover for, Death Man #1, “Falling At The Wrong Side!” 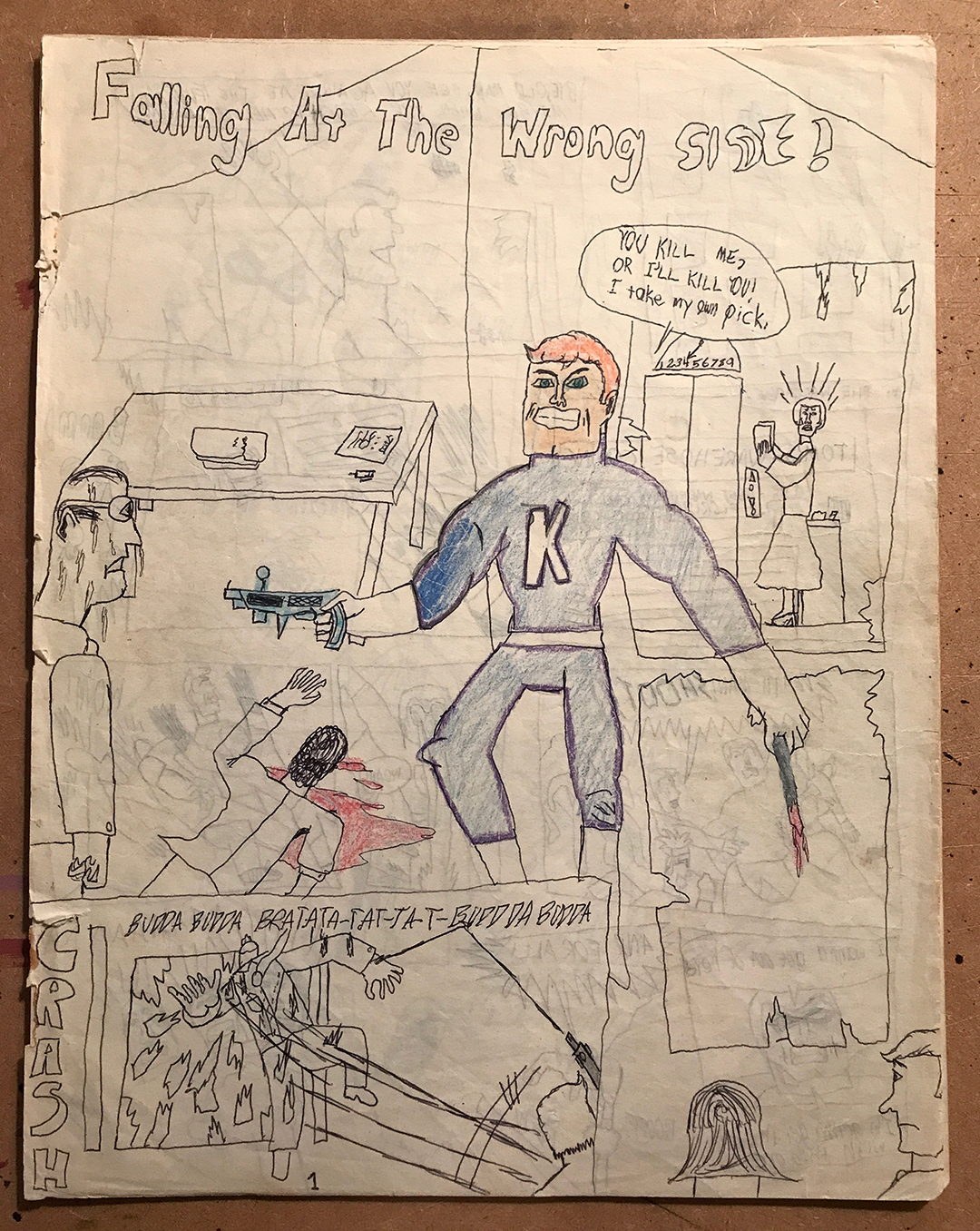 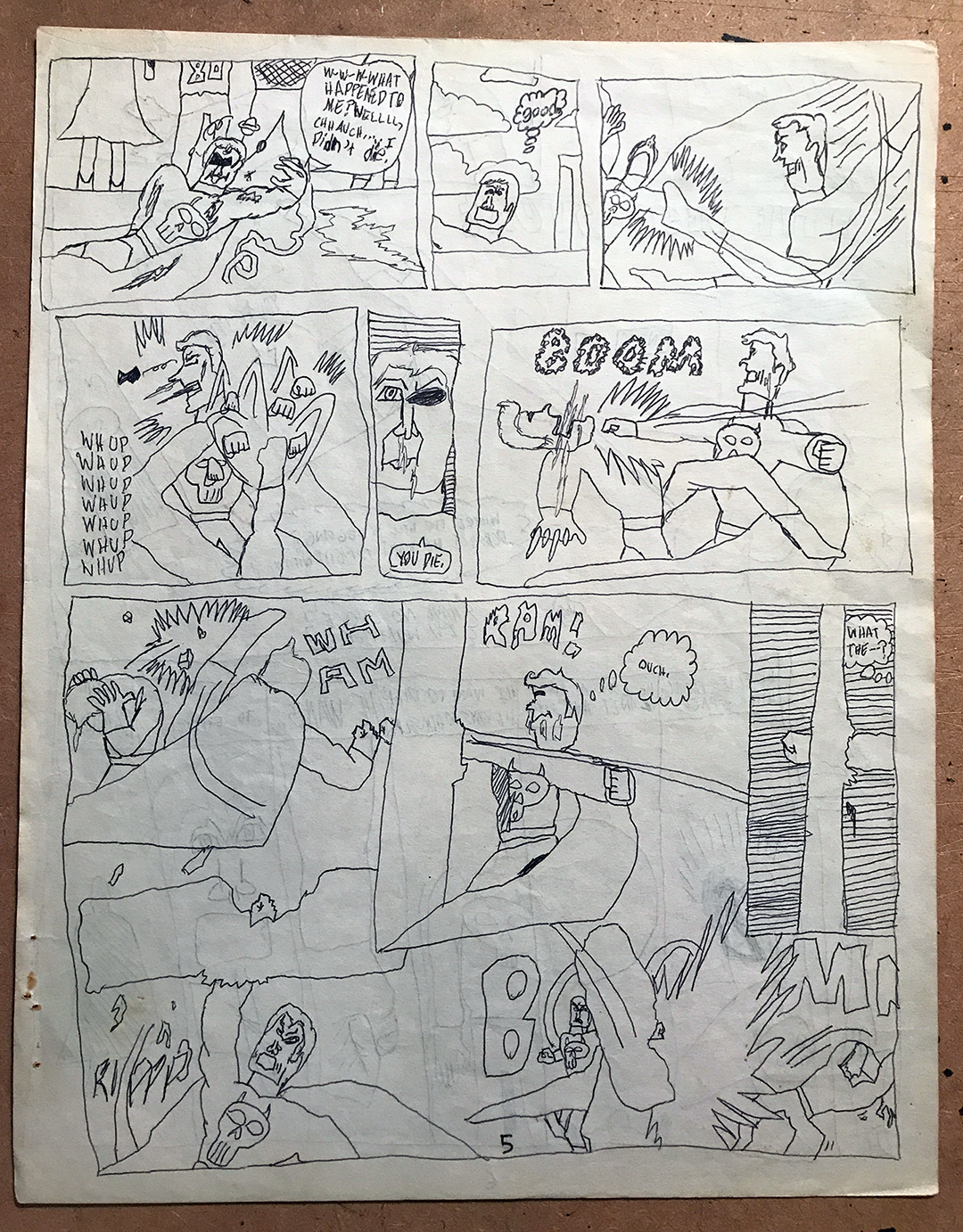 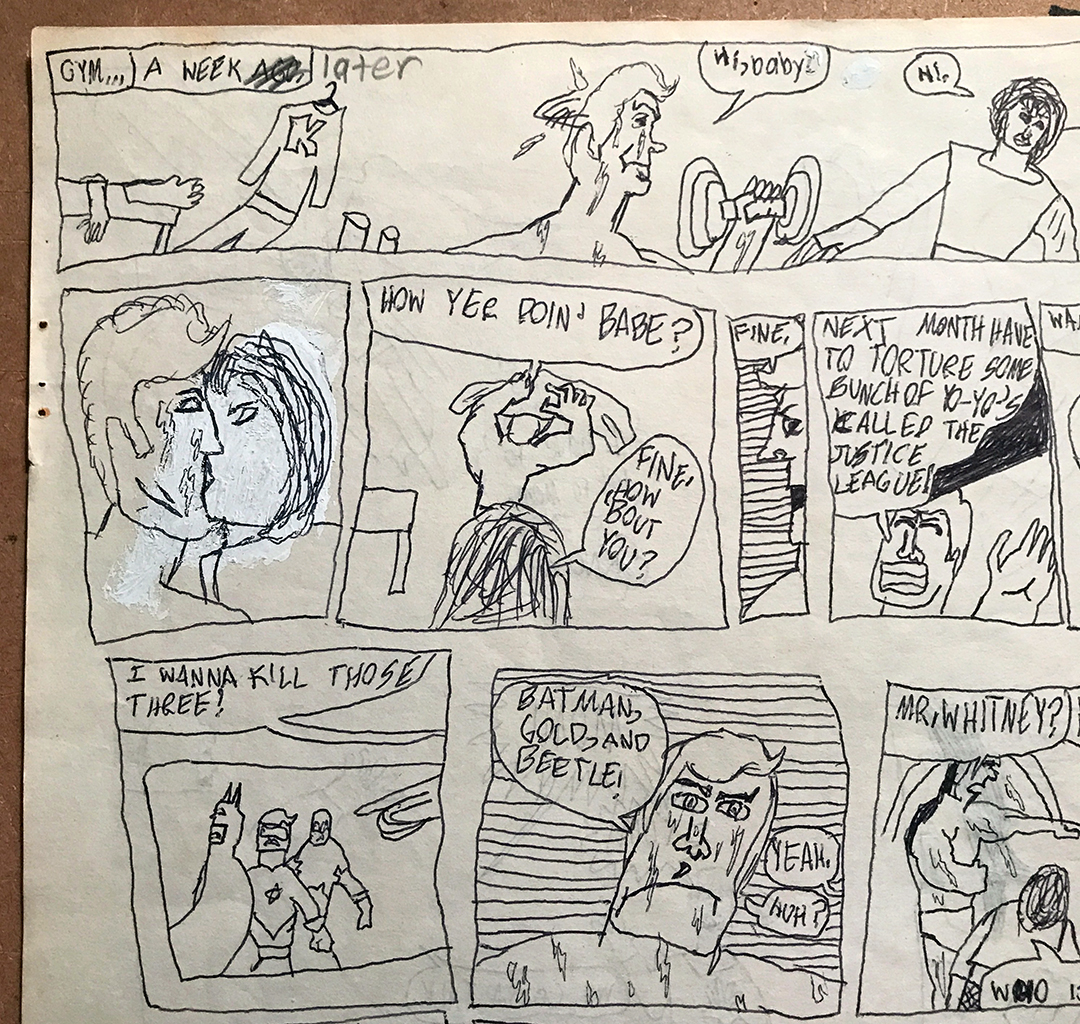 Honorable mention: I don’t know how, but around this time I ended up with these giveaway things (thank you, mycomicshop.com)… more Ditko and Byrne. 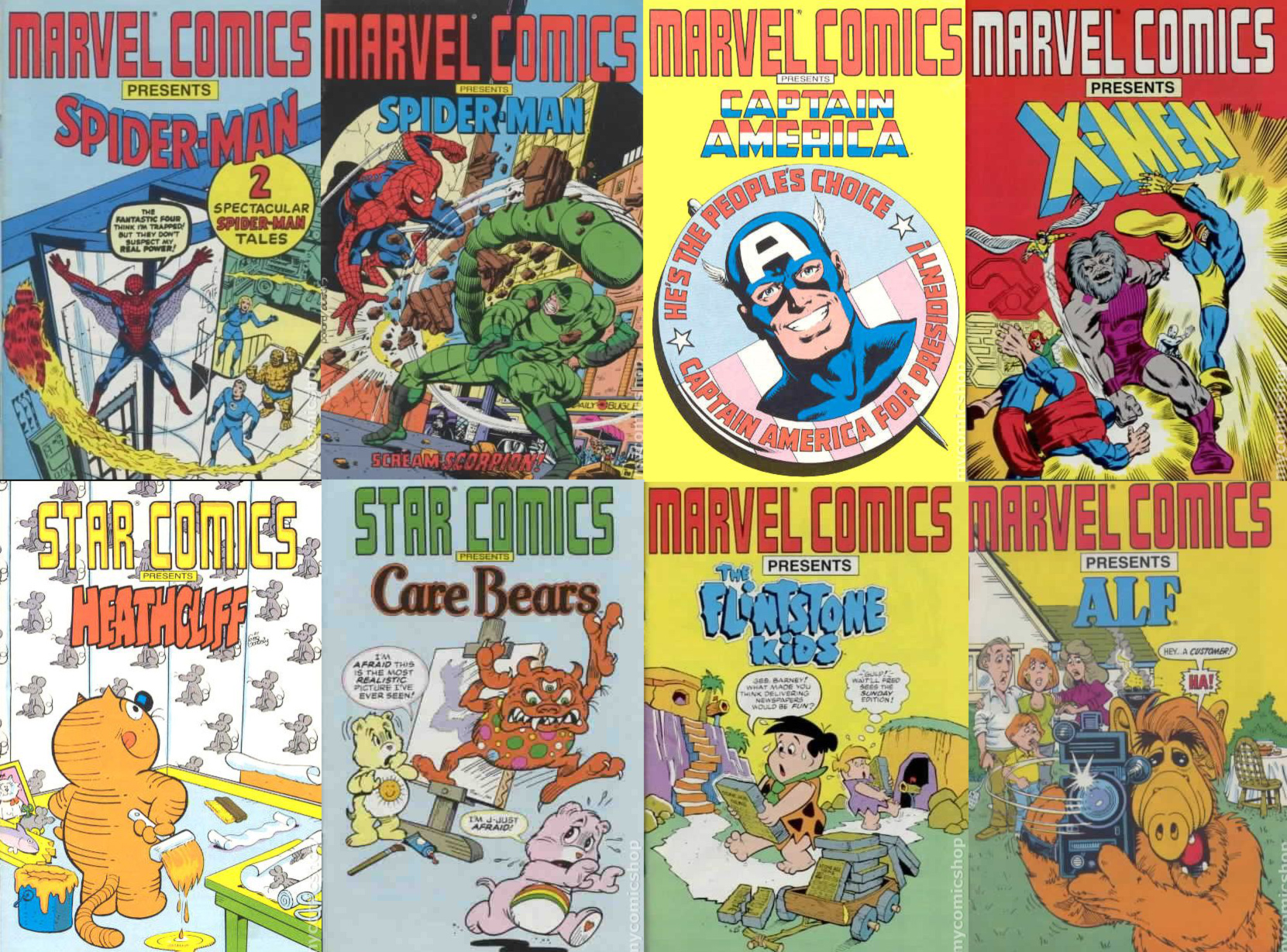 My hunger for comic books kept growing. I would get my fix here and there, but it was stone cold classics one right after another. Here’s my Waldenbooks stash. That Daredevil #260 and Detective Comics #589 were BIG for me. 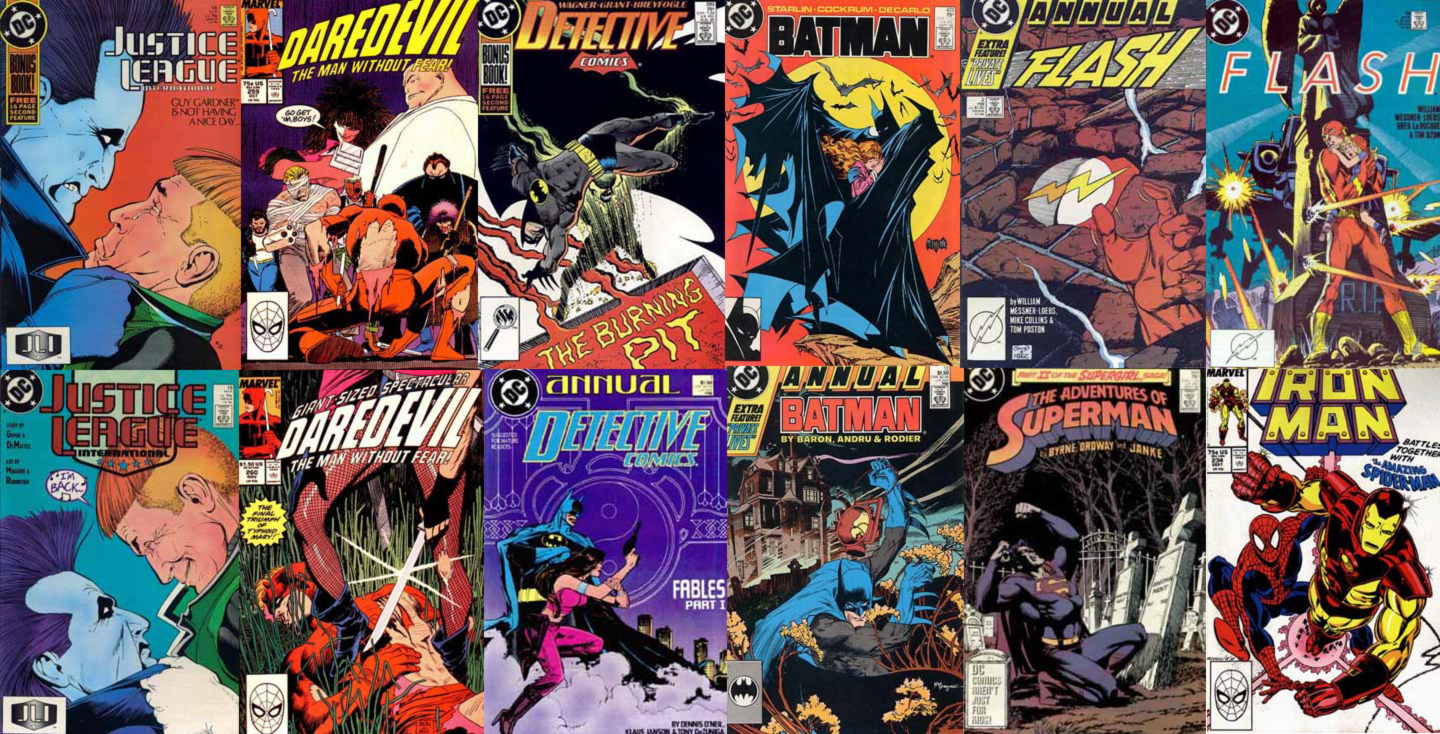 Here’s a batch from some random pharmacy close to my mom’s apartment. Nothing but gold.

Before Waldenbooks, before pharmacies, I experienced the comic book store. The examples I’ve shown so far were off the spinner rack. Other than Alex’s recent-ish comics, the idea of back issues didn’t really hit me until I stepped into a comic store. First one I ever heard of was A&M Comics in a local television commercial. My mom and stepdad were kind enough to drive me there – it might’ve even been for my birthday in May – but we accidentally went about a mile past it on Bird Road and ended up at Sunshine Comics instead. All I remember was an older lady with long white hair running the place, sitting on a stool with a big furry dog at her feet. However, because I’m a single-minded creature and because of the TV commercial, A&M was the store I wanted to go to, so off we went.

[While Sunshine is unfortunately long gone, A&M is still very much around.]

These are more recent pictures of the store. A&M’s front windows had huge Superman and Spider-Man paintings on them — I don’t know how we missed that the first time around. I wish evidence of those paintings existed. If anybody who knows somebody who might be able to furnish these photos, please let me know! 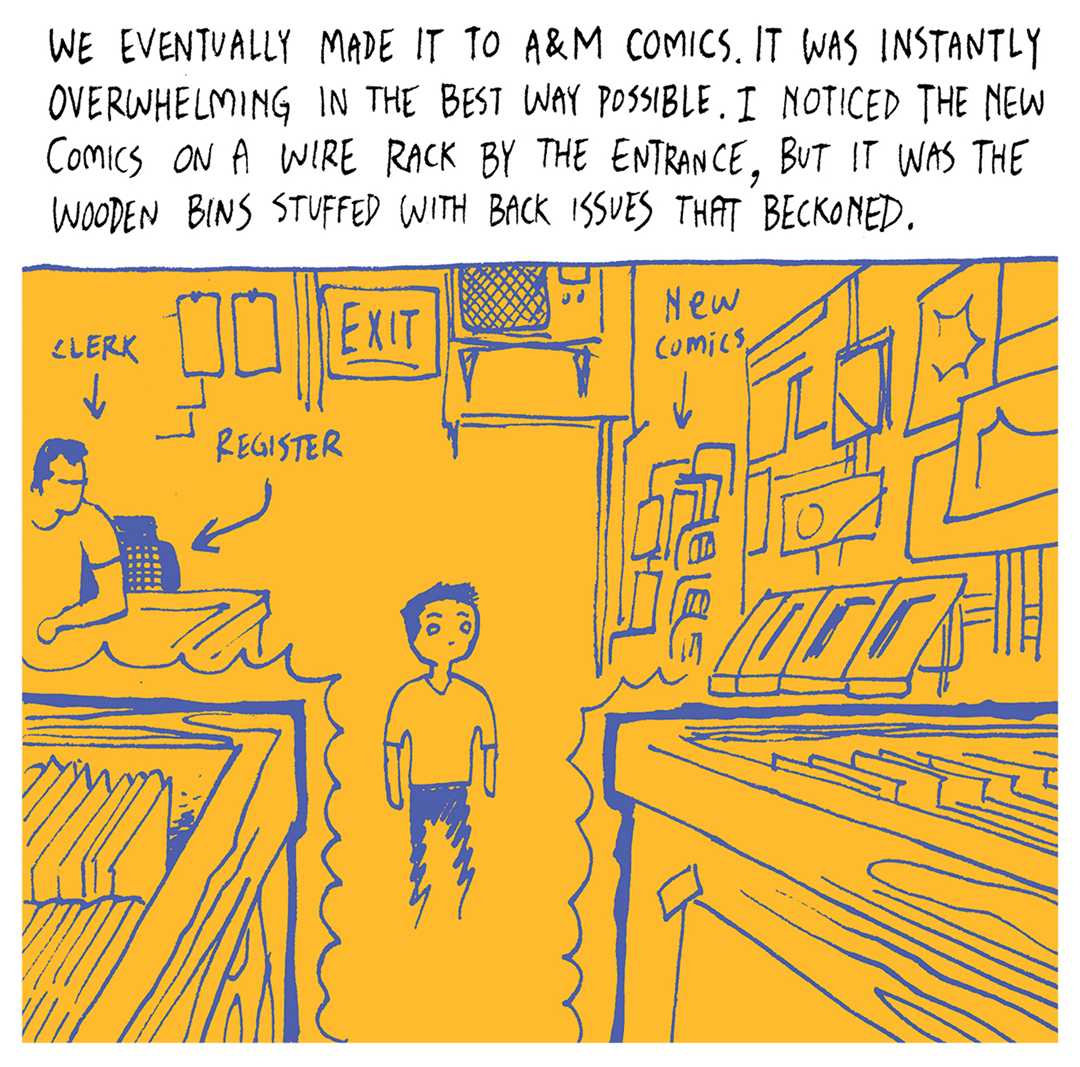 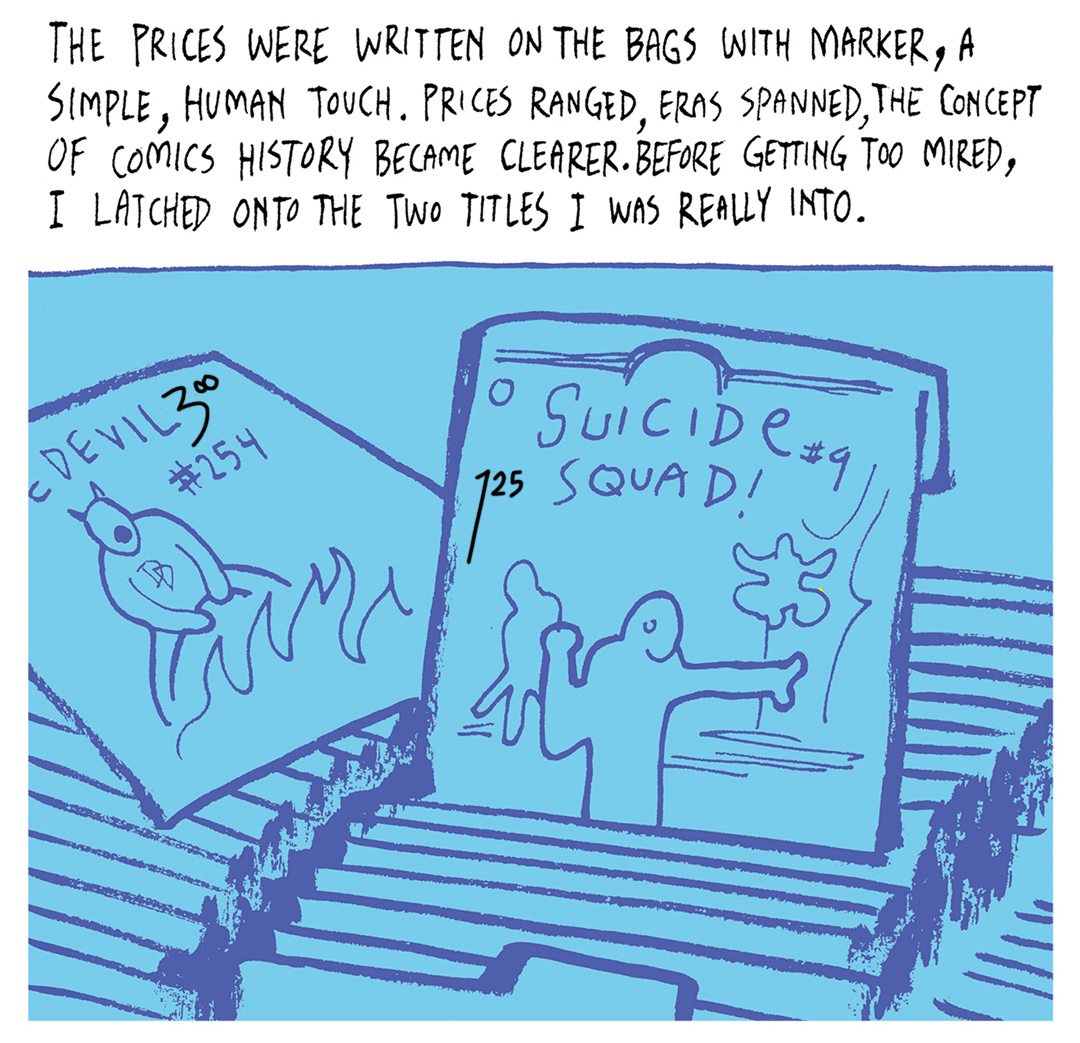 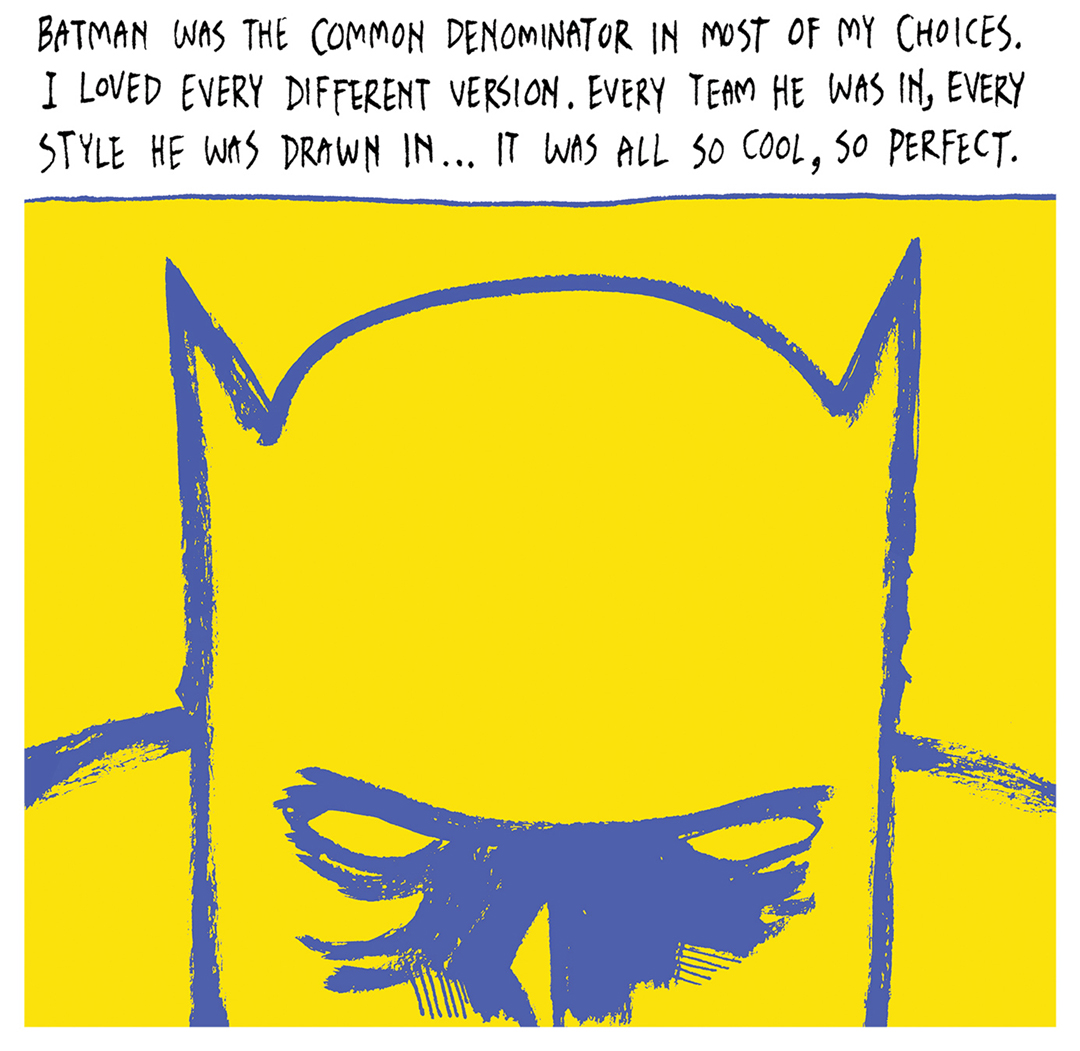 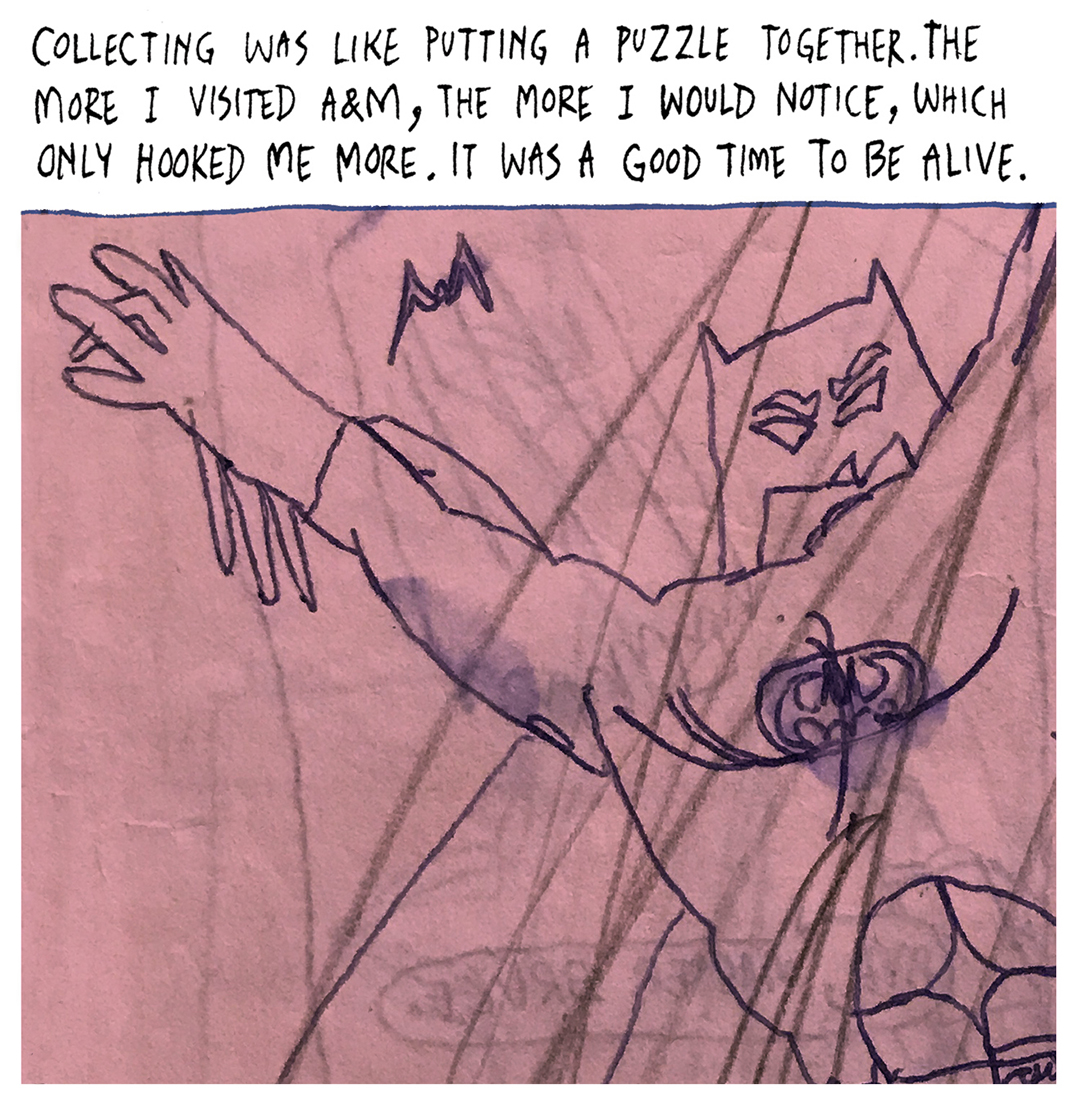 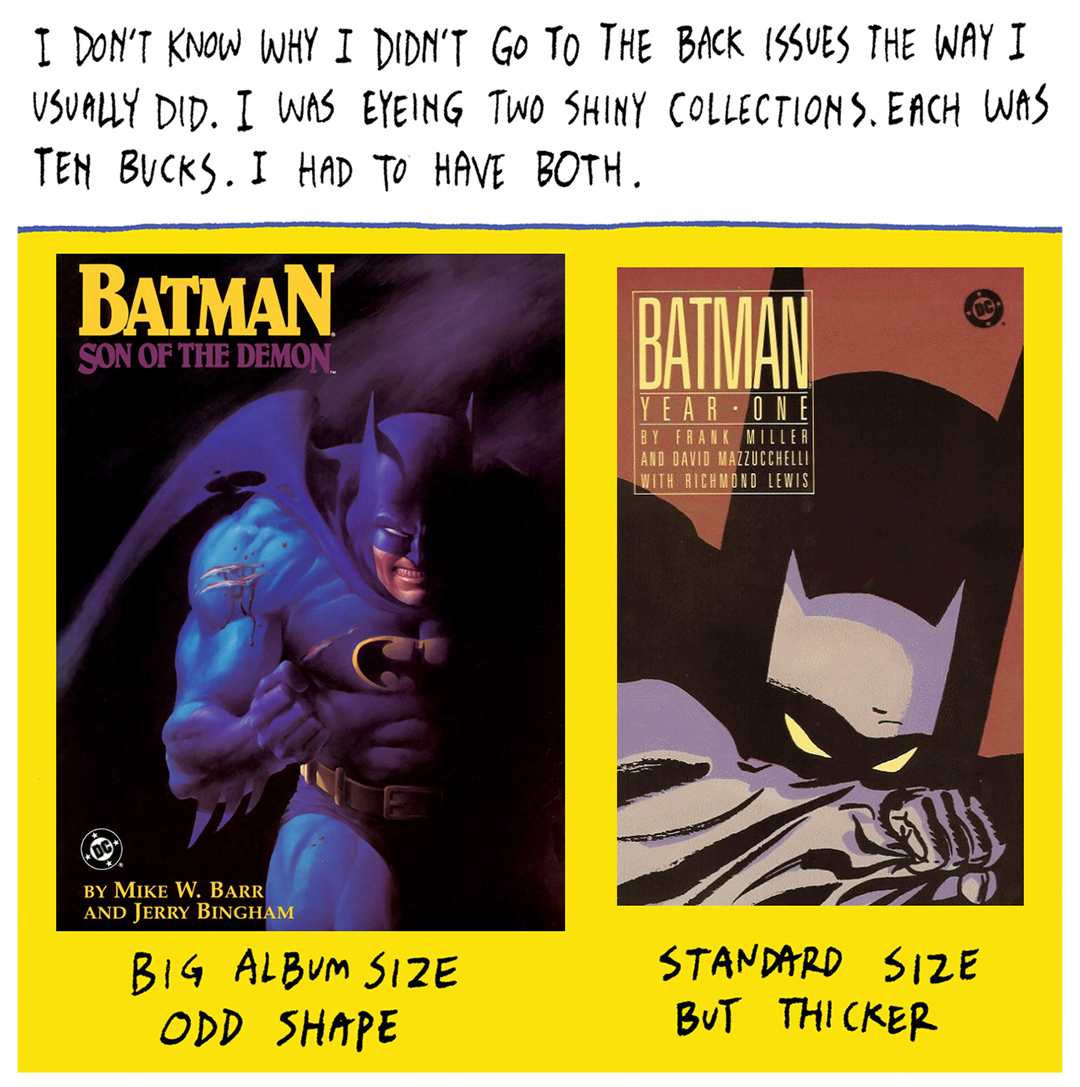 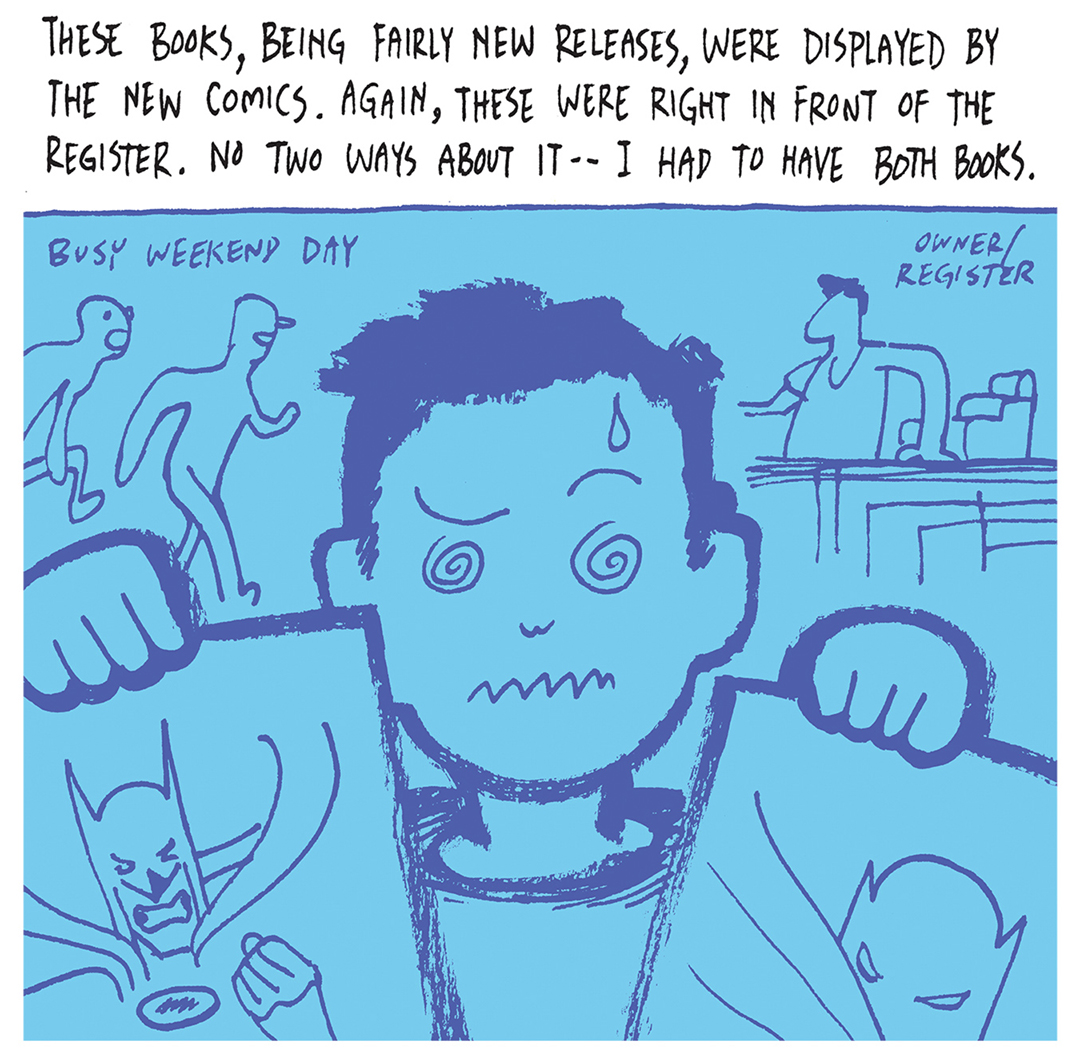 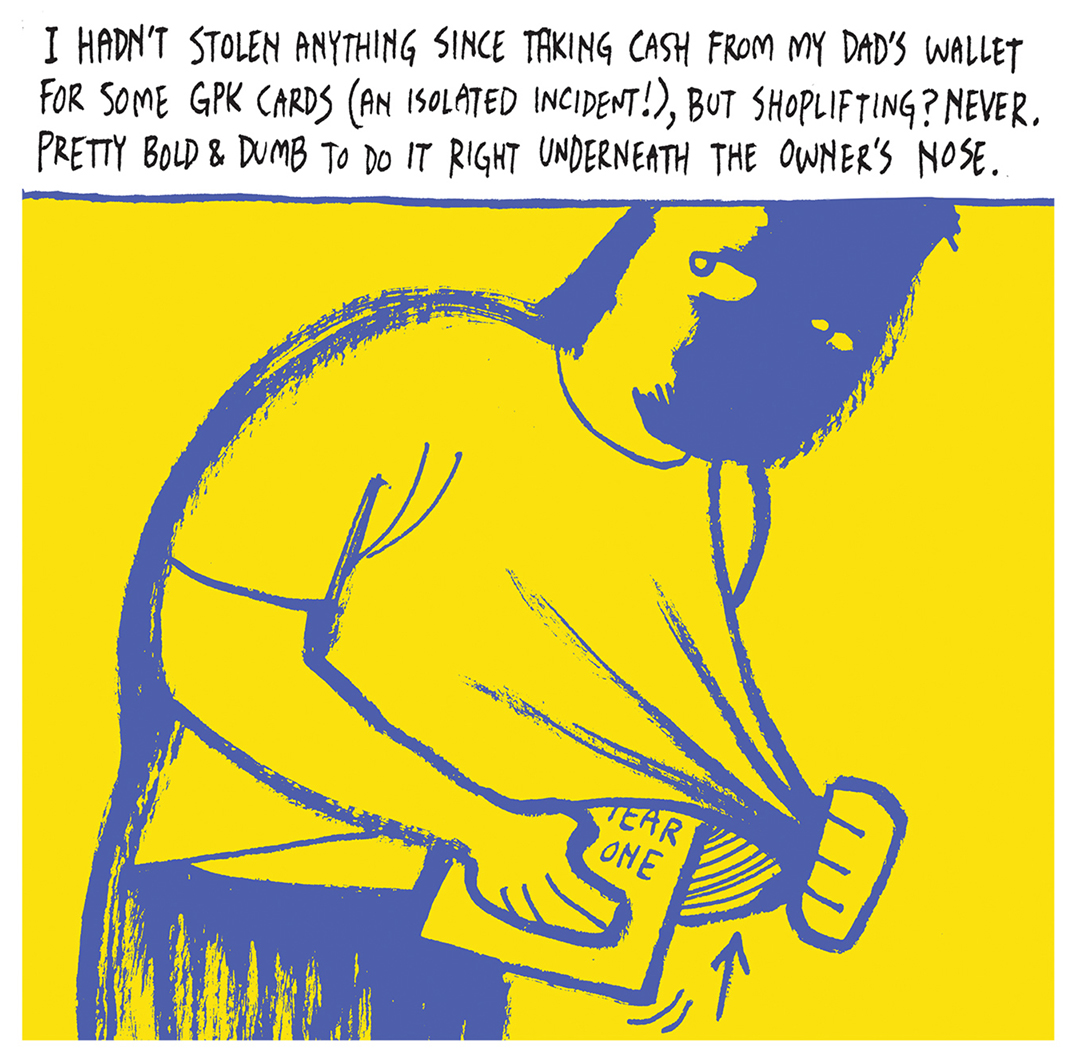 For scope, this was me crossing Bird Road:

My stepdad got a job in Dallas, TX, so he and my mom moved there that September. Back to school, too. 4th Grade would turn out to be a great year, but how was I to know that then? I was still grounded and moms went to another state for who-knows-how-long.

Before she left, though, she snuck me two comics she saw in the airport when they first went scouting for Dallas apartments. 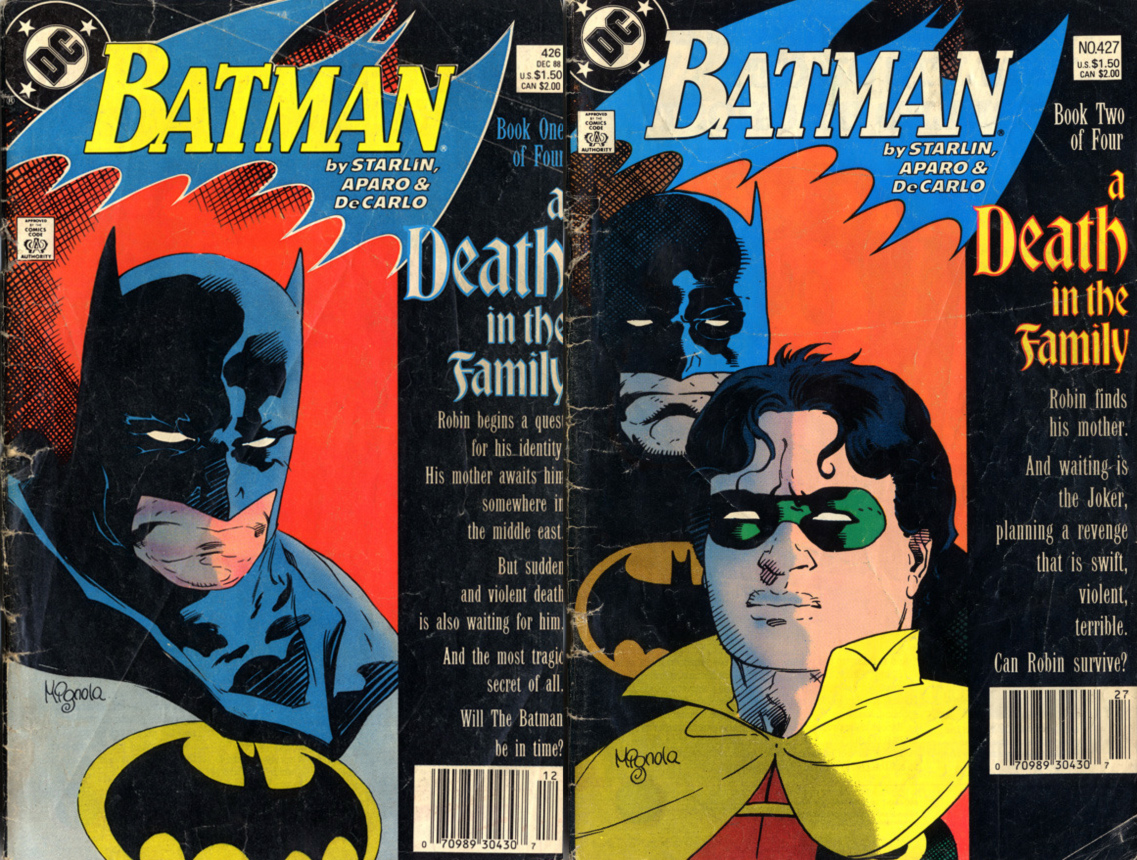 Turns out she wouldn’t be gone for too long. I missed her terribly, though. I kept busy doing homework, making comics, being a good citizen.

By the time Christmas ’88 rolled around, I got my garbage bag full of comics back from pops. It wasn’t a good optic, but at least I had them in my hands. The world made sense again. I didn’t even mind that some of them were bent a little. They were never really in mint condition in the first place. 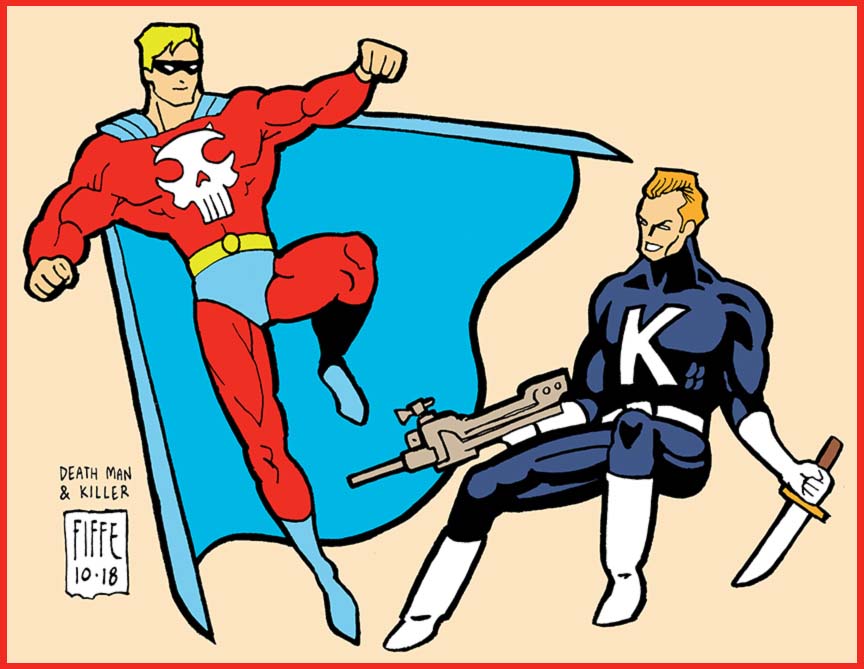 NEXT: Acts of Vengeance versus Batmania, 1989.