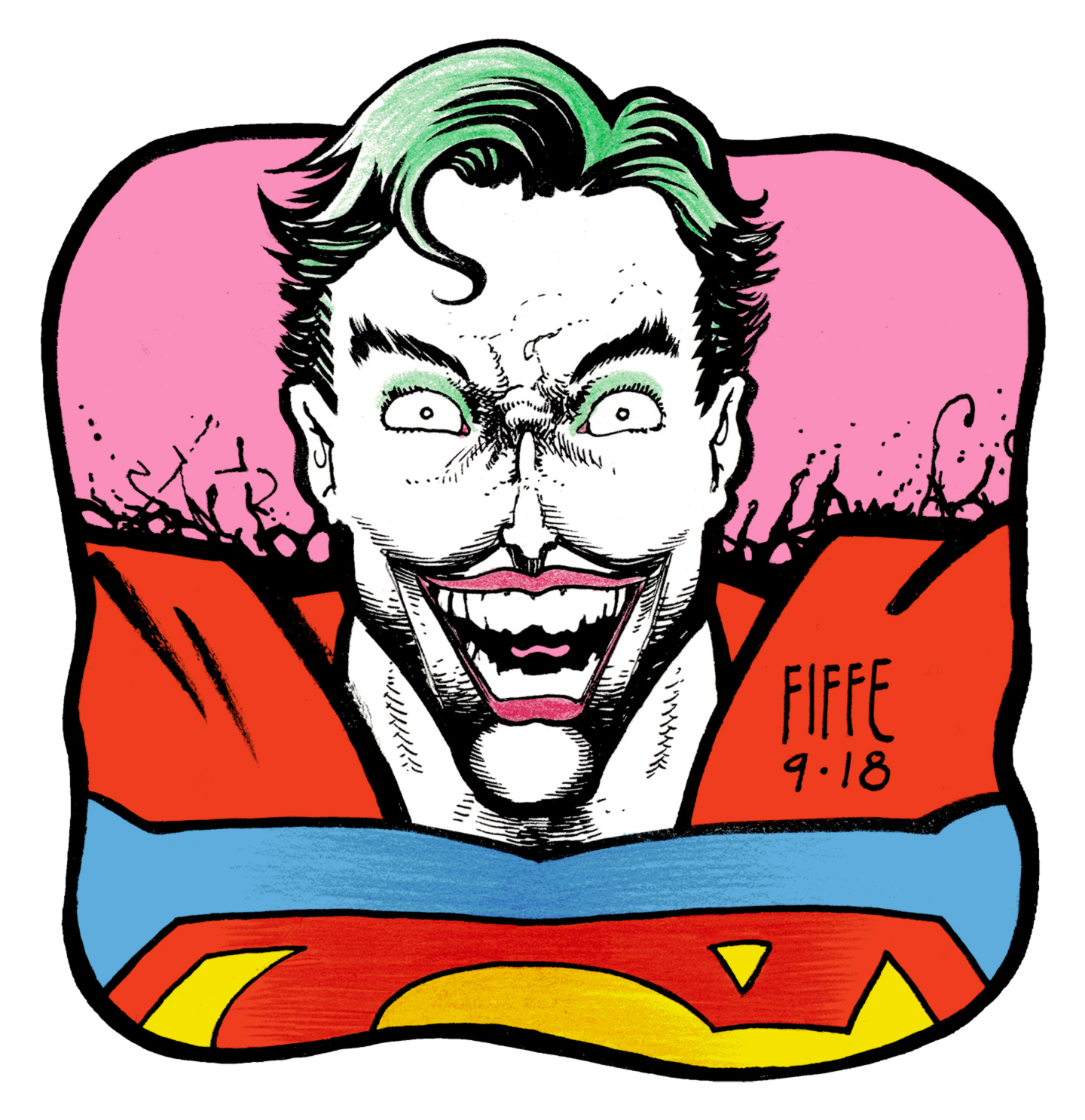 I was back from living in Spain with my grandmother, now reunited with my parents in Miami, Florida. I was six, waiting out the summer with the same comics I collected in Madrid.

Right before 1st grade, though, this comic was purchased in the 7-11 on 3rd St & 8th Ave, Little Havana, a block away from our apartment, and was gifted to me. 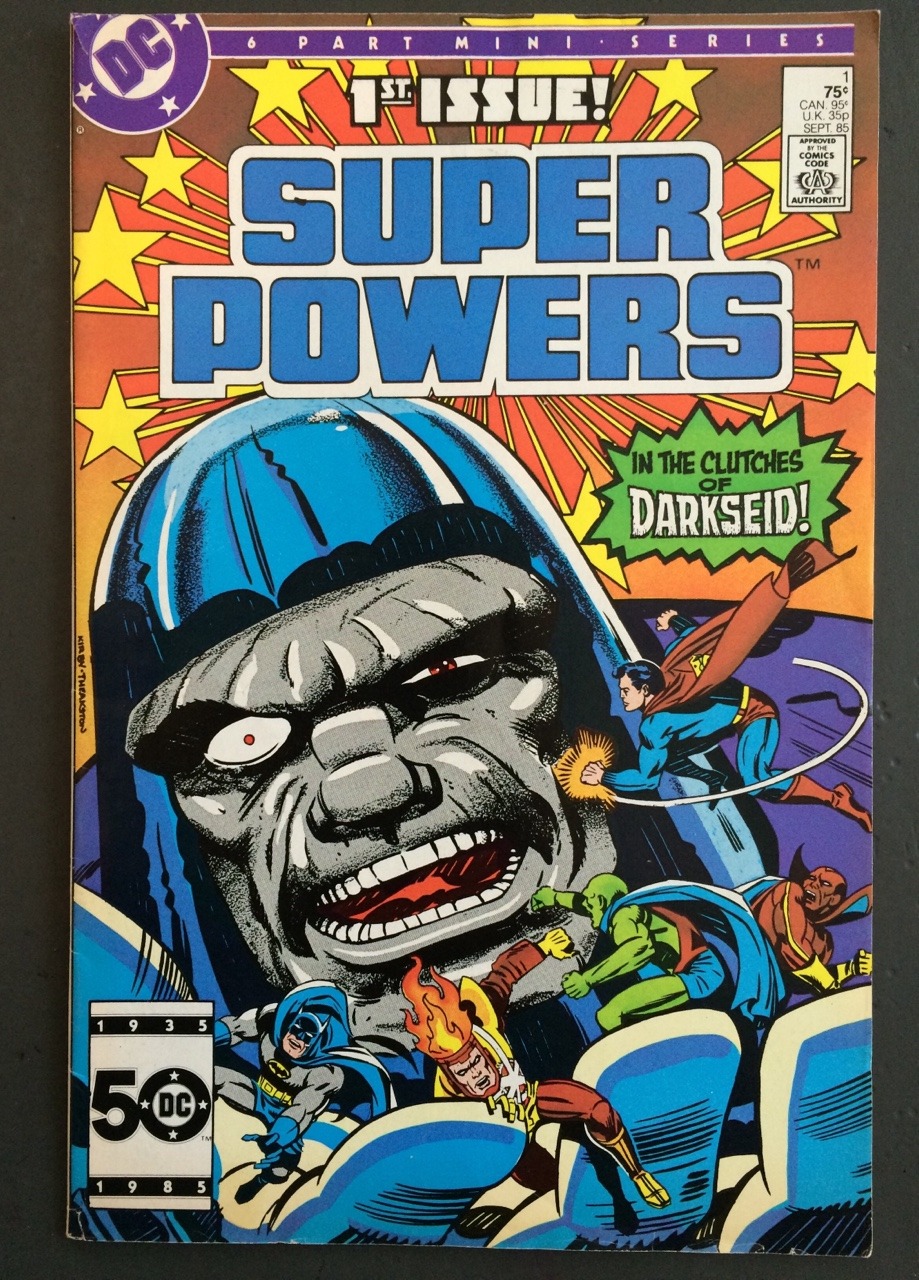 My first Kirby. There are several reasons why I think this is a great comic, Kirby’s evocative storytelling being the obvious indicator.

Shortly thereafter, my grandmother got me this one, but she held it back for some reason. (I was probably misbehaving, or maybe she took a second look at the cover and thought it was too violent). I saw her hide it in the top cabinet of our kitchen. I waited for her to clear out so I could climb the counter and grab it. She caught me, snagged the comic from my hands, and ripped it in half. The interiors of this comic couldn’t possibly live up to the forbidden fruit this cover promised. I’ve since flipped through this one; it doesn’t. 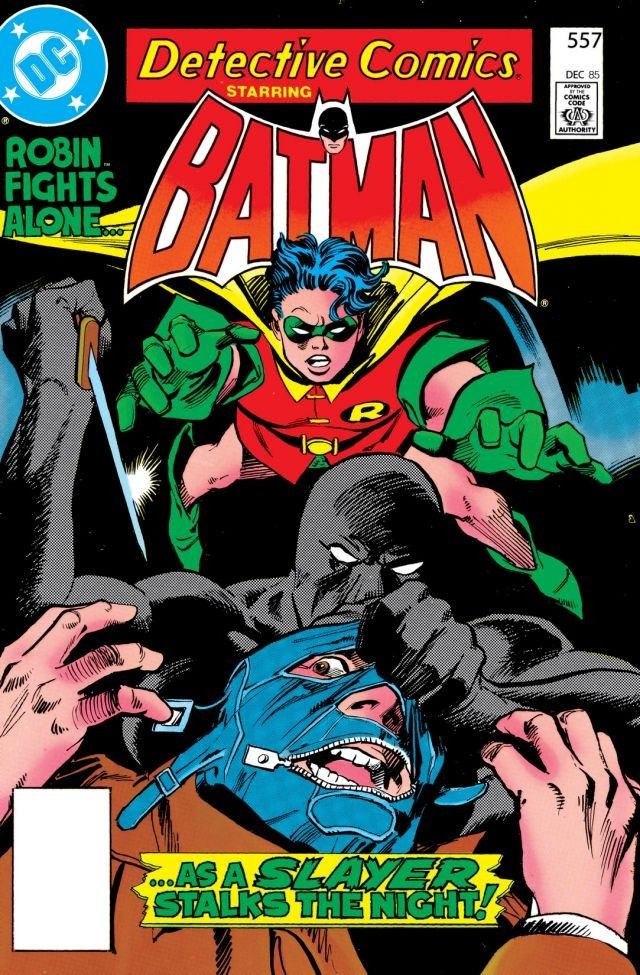 Didn’t get any comics for a while after that. Didn’t make them, either. My mom tried to stir me to continue, so she drew this for me based on one of my Masters of the Universe mini comics. I then colored it in. My first collaboration. 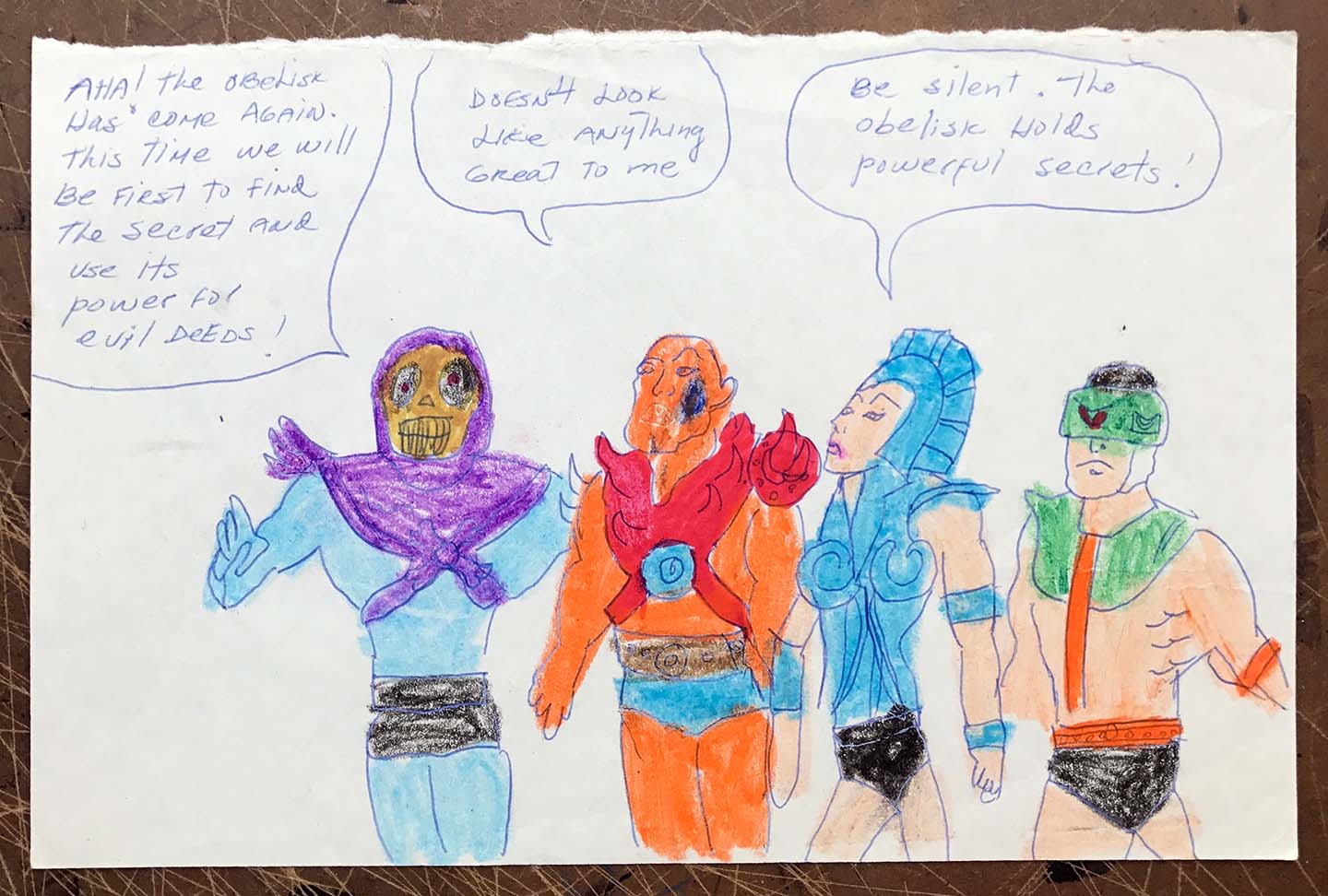 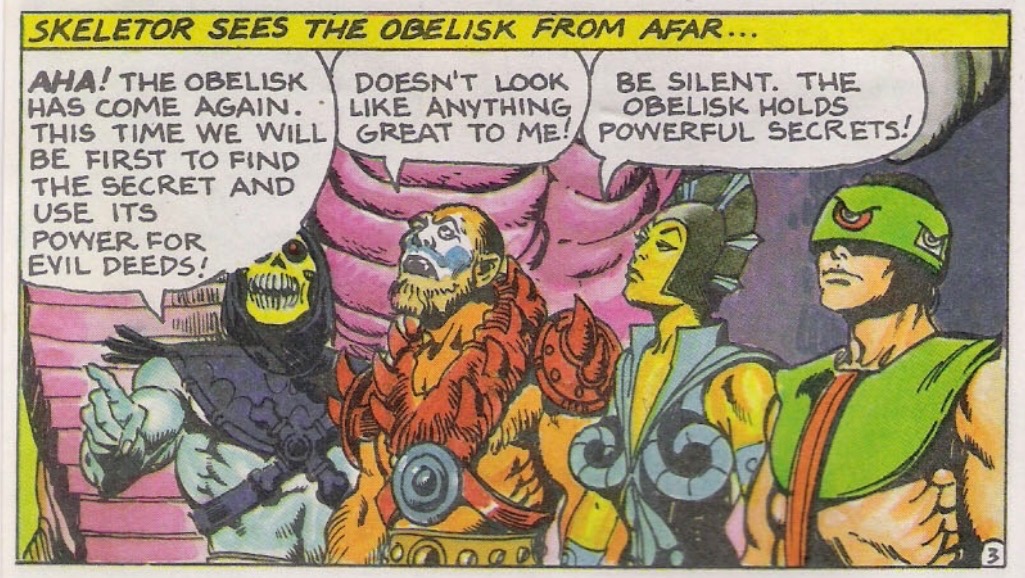 How awesome of her to do that. Such beautiful lettering. She knew a little English at that point. I knew almost zero English, but between television and ESOL class, I was on my way.

My new obsession was Garbage Pail Kids, a trading card series I discovered one afternoon on the local ice cream truck’s counter. A quarter a pack… and it included a stick of gum? This was the coolest thing ever. I started with Series 2 but I didn’t feel left behind. I was too mesmerized to be a completist. 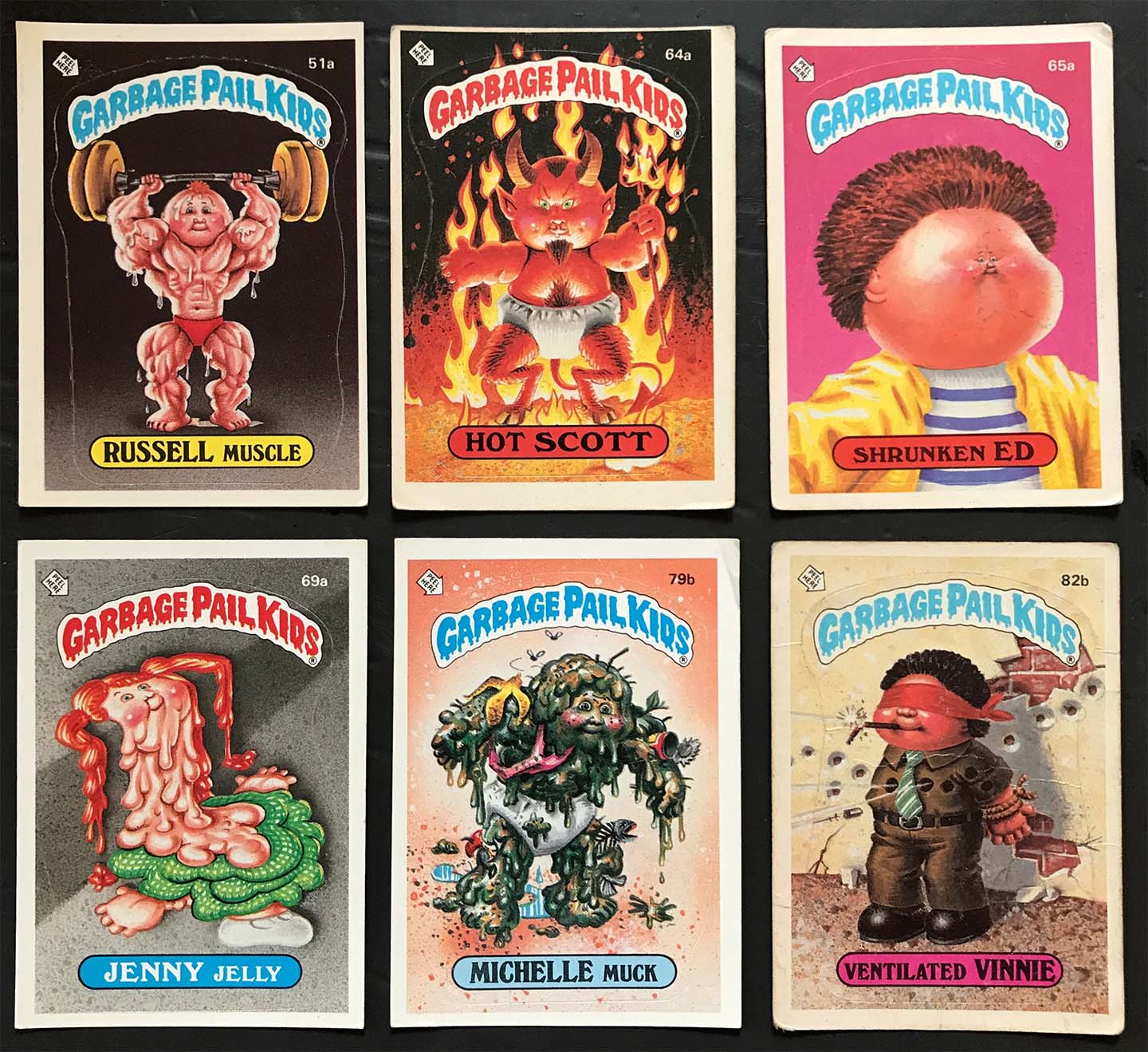 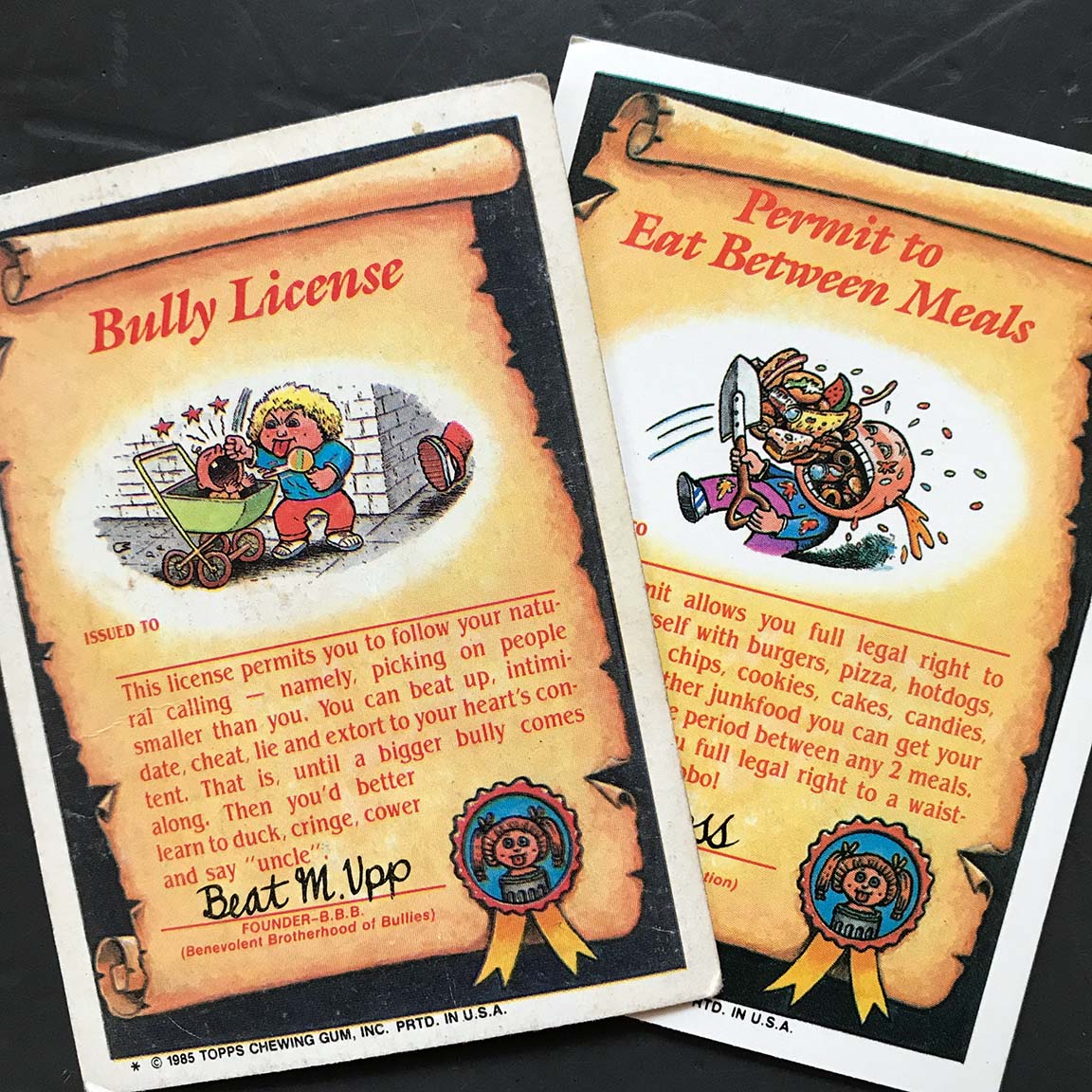 But the spell turned to mania. I was hooked bad. I wanted them all, I needed them bad. I ran out of quarters. I din’t see any quarters lying around, but I knew where my dad put his wallet. I never dared risk anything like this before – it never even occurred to me – but this was different. I saw a 20 dollar bill but knew that would be too obvious. I think I took a few singles, maybe it was a five, but I definitely had a method. I’m sure I would’ve been punished. I never got caught.

Didn’t even get to complete the damn puzzle-poster. 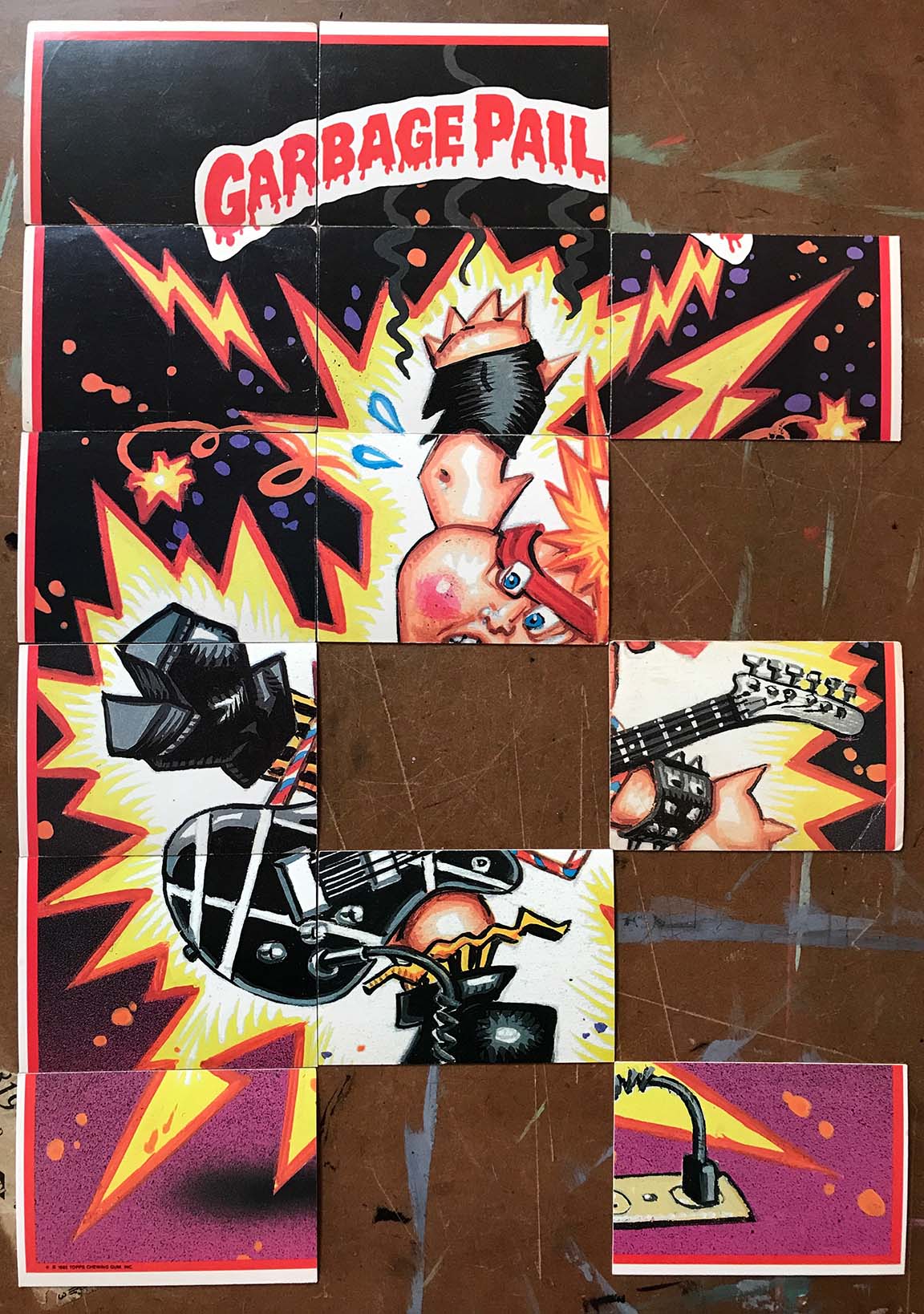 Look at this thieving little shithead with his tucked in GPK shirt that his hard working parents got him. 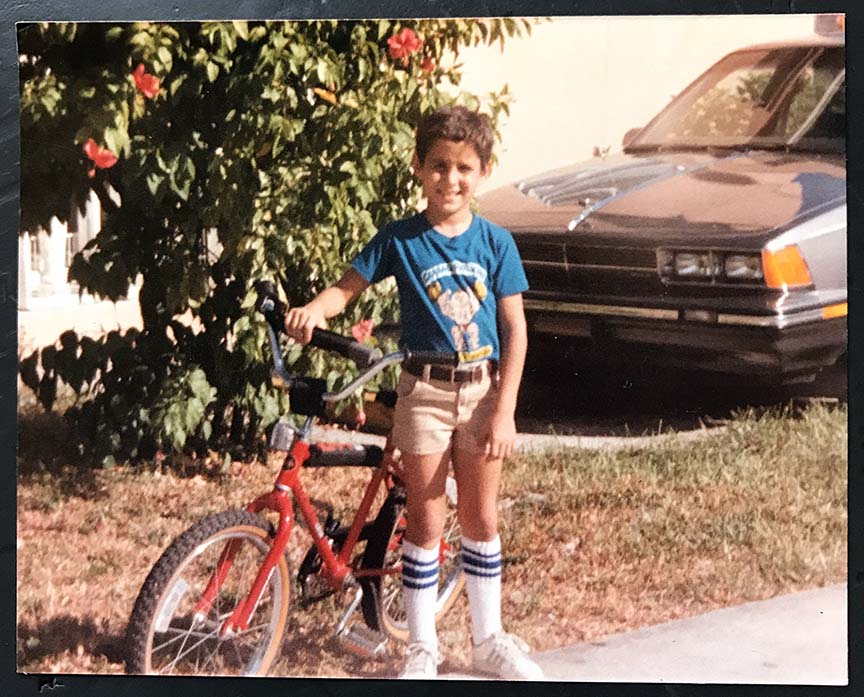 I was also getting into the WWF. I have zero toys or drawings from those big rubber wrestling figures, but I played with them all the time. I would beg my mom to rent all the Wrestlemania and Battle Royal VHS tapes from out local video store.

The Masters of the Universe cartoon was a must-watch, of course. I was still into the franchise. G.I. Joe or Transformers, not so much. Those were on the periphery, but I was captivated by their muscle-bound competitor.

I still didn’t draw much during this time. The only evidence of any artistic bent was this double profile on a single sheet of typing paper: 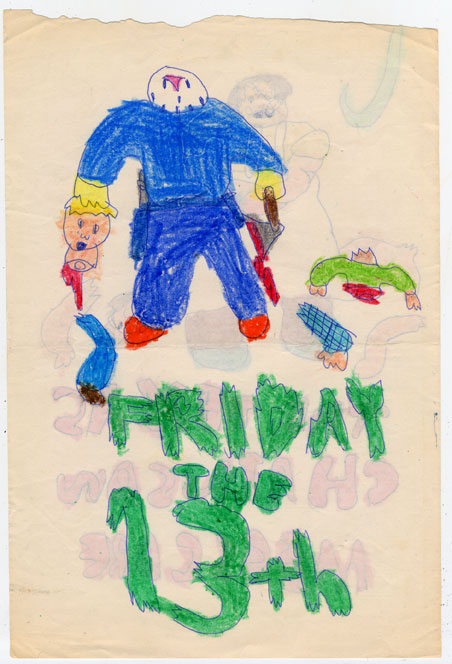 Aside from the WWF rentals, I would sneak as many peeks of these horror classics as I could. I wasn’t scared, but I was gripped. I was somehow allowed into the theatre to watch Nightmare on Elm Street 2: Freddy’s Revenge. Loved it. Might’ve been the first boob I ever saw.

2nd Grade happened. So did my birthday. 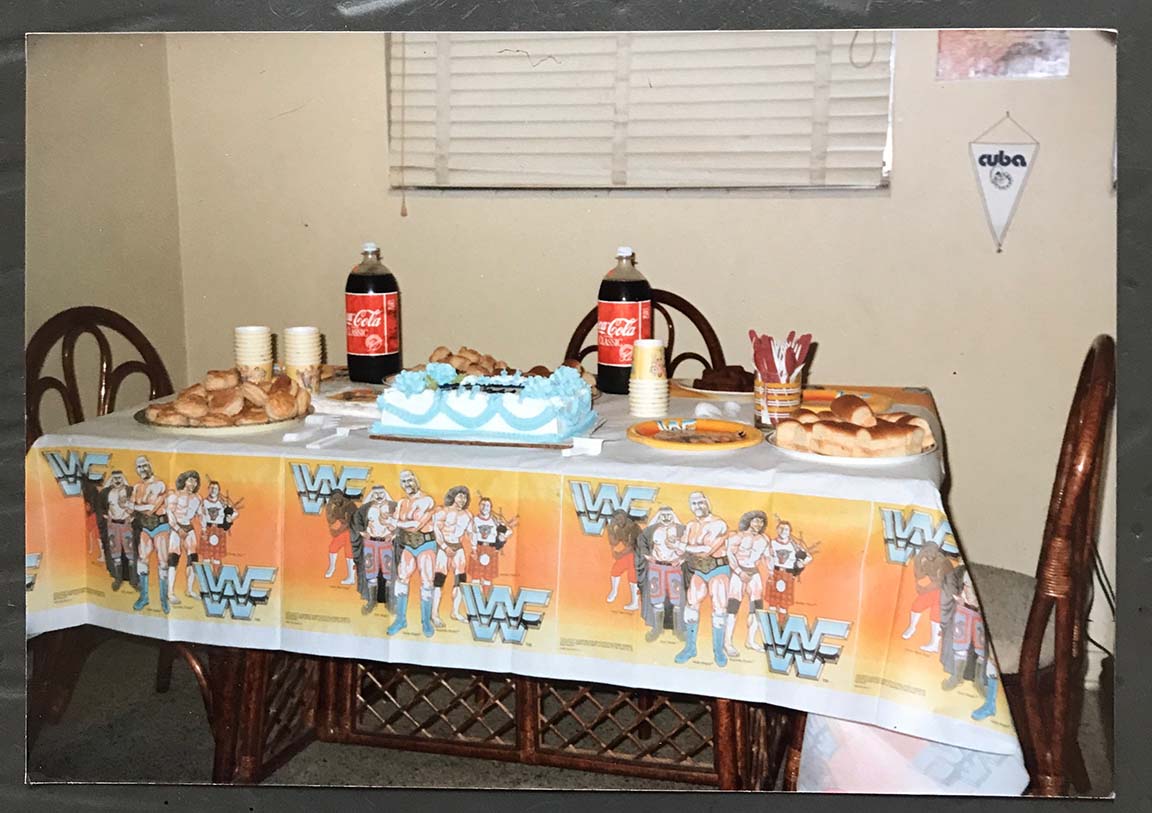 I managed to acquire 5 new Marvel comics at this point. They came from a supermarket and within a 3-in-1 package deal. I don’t recall which ones came from the Multi-Pack, but judging by their release dates, I’m guessing the top three were bunched. 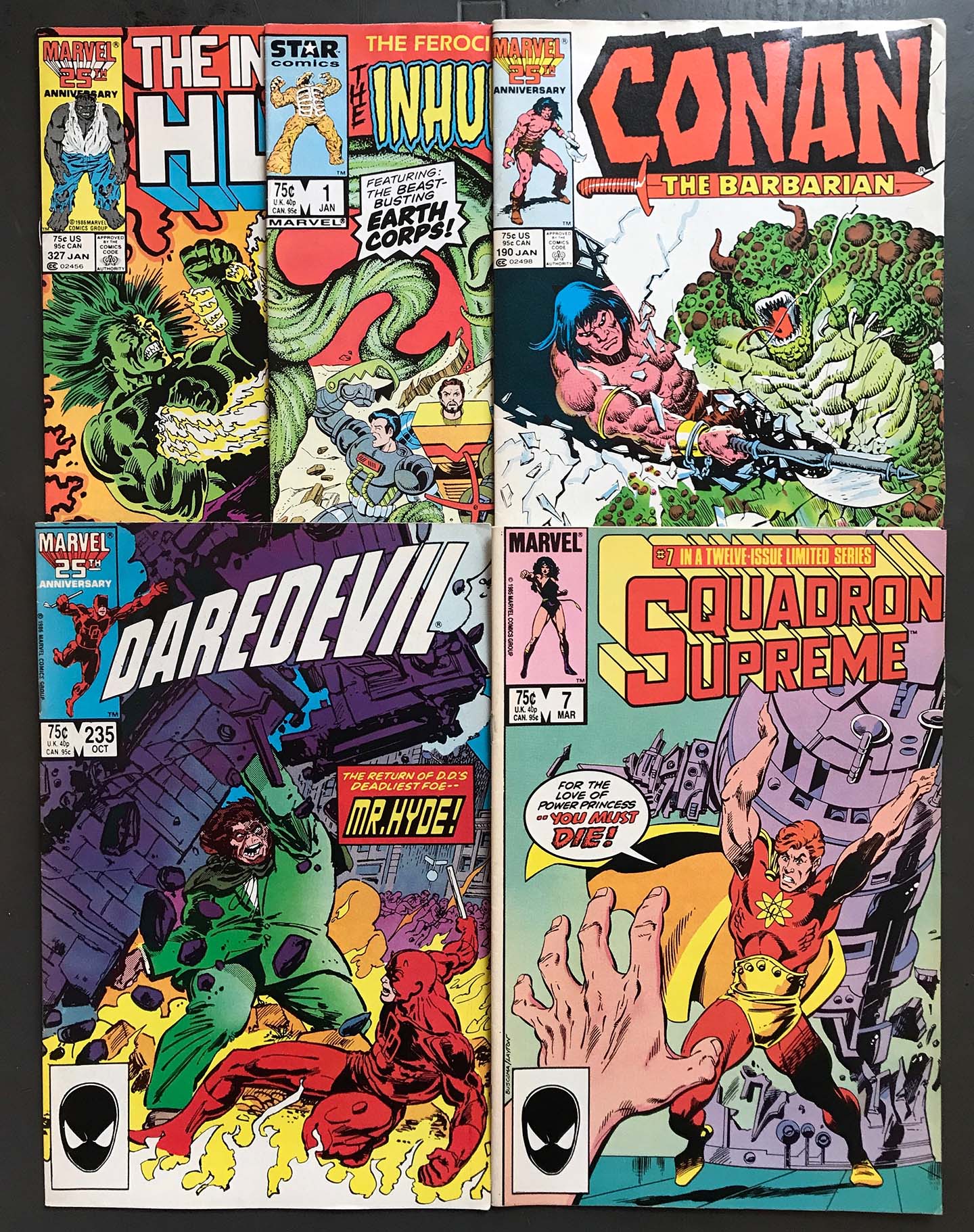 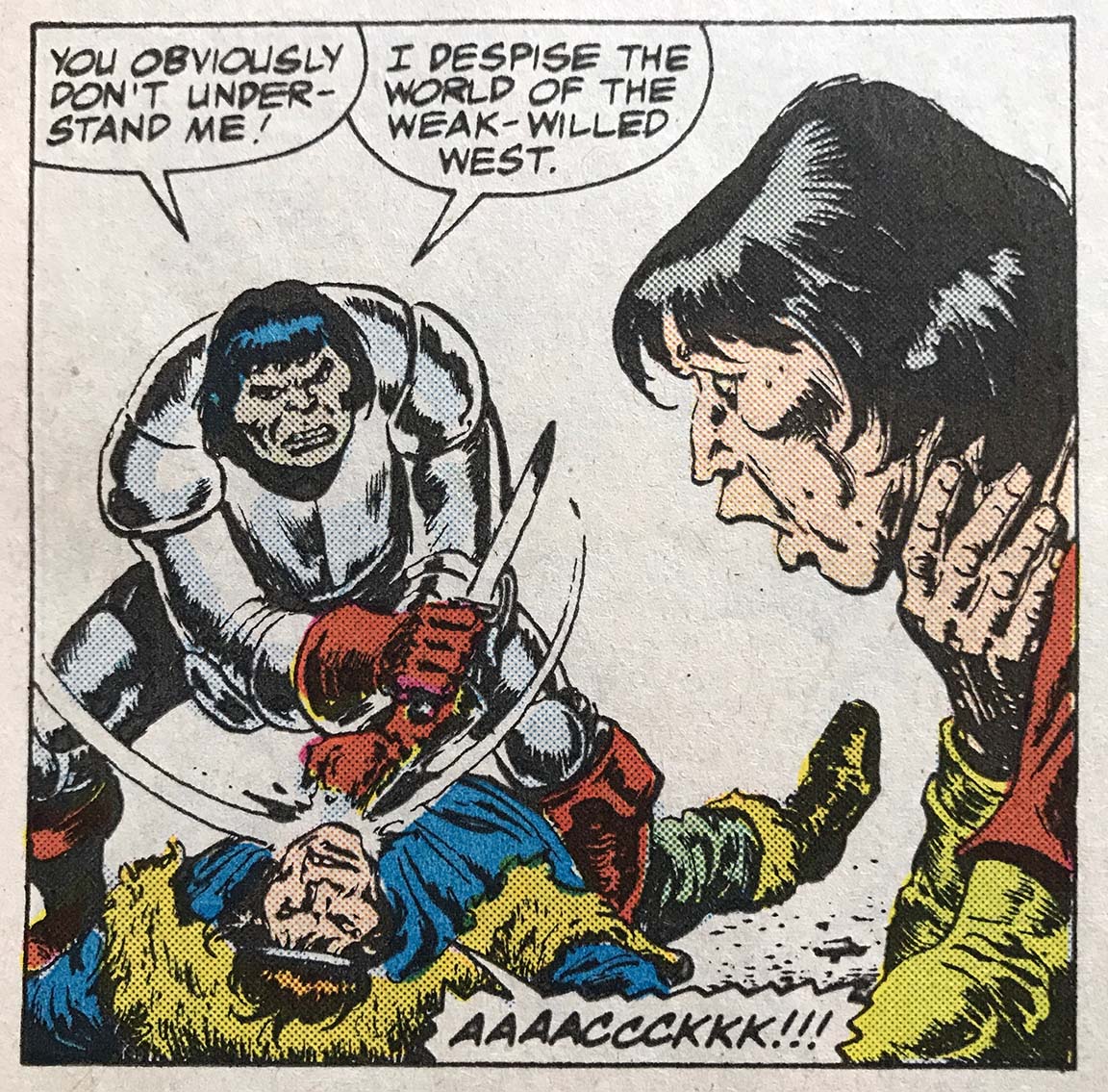 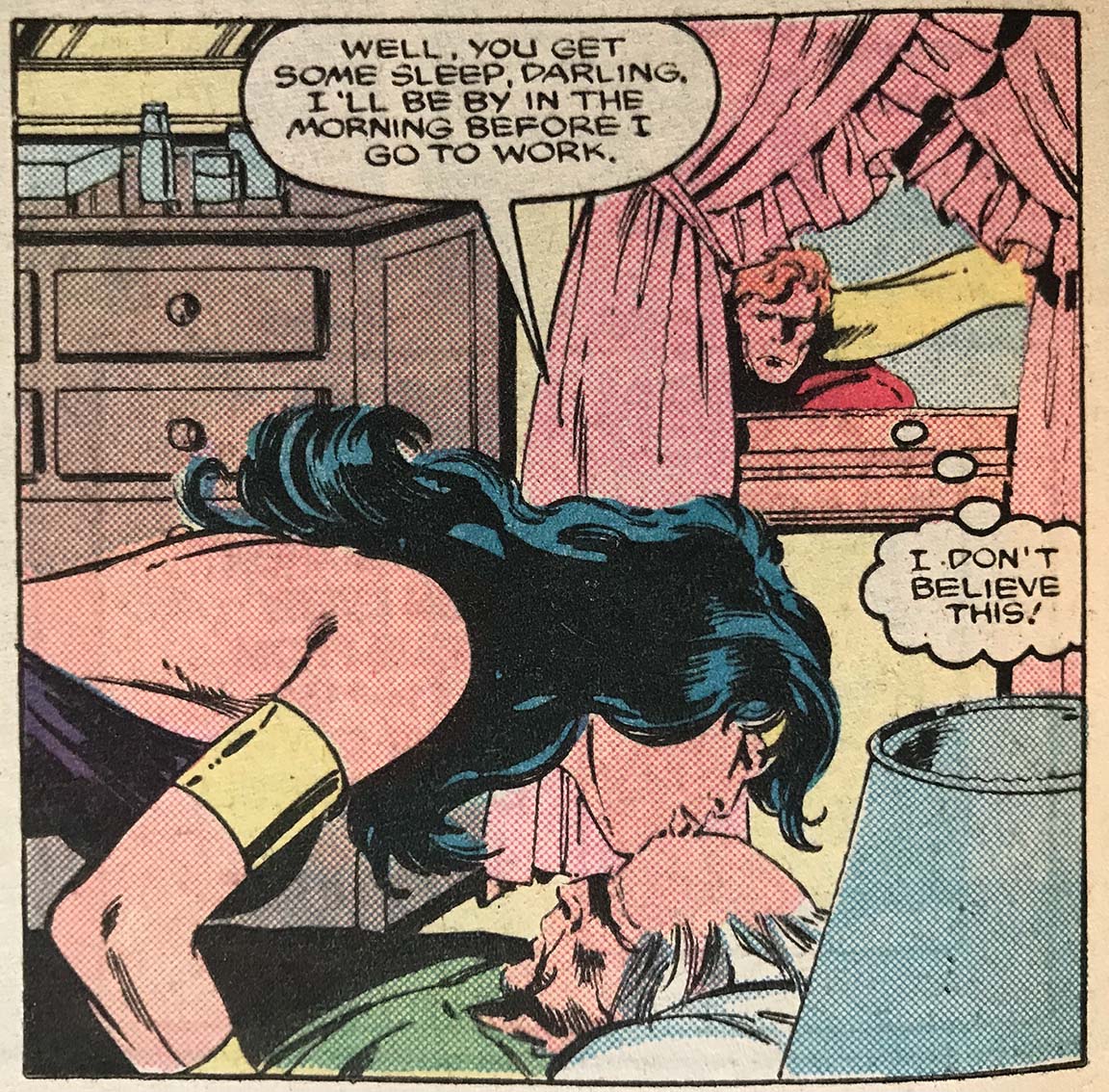 The Squadron Supreme panel above is deeply hilarious to me. What a creep that hero is! A jealous, petty Peeping Tom who got the girl in the end! I liked reading that issue specifically for a dose of that weird romance. I’ve covered the impact that issue of Daredevil had on me, but I wasn’t necessarily caught in a Marvel-fueled fever. I was less impressed with the Inhumanoids and Incredible Hulk issues. (Maybe it was the Hulk’s long hair? I dunno, children are superficial sometimes.)

Y’know, I think I also had these two other comics. I don’t remember a damn thing other than the covers. They couldn’t match up to the toys’ mini-comics or the cartoon. 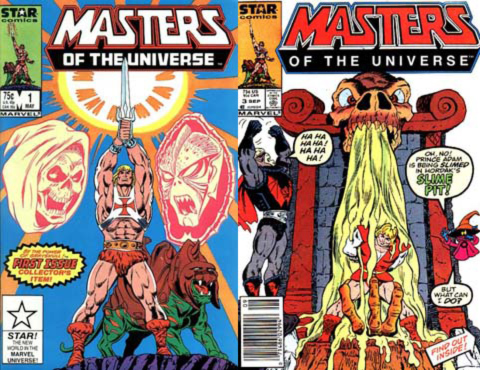 I was still deeply into the animated series. Hell, I wished for a channel that would play nothing but He-Man cartoons with He-Man toy commercials between episodes.

MTV aka Channel 48 was constantly on. That was basically my radio all throughout my childhood. It was what I drew to, but I still wasn’t drawing too much at this point. I didn’t have any focus or desire. I was interested only in consuming.

August would curtail that. Both the Masters of the Universe and Garbage Pail Kids movies made their respective debuts. My two primary obsessions on the big screen! My family would finally see the brilliance of these things. But we know the truth. We know where those movies rank. Even as a kid sitting in those theaters, I knew they missed the mark. I don’t think I was embarrassed, but I was deflated for sure. The bloom was off the rose.

Late ’87: 3rd grade had just started. Comics came back into my life in the form of three sets of multi-packs. This time, it was DC’s turn. 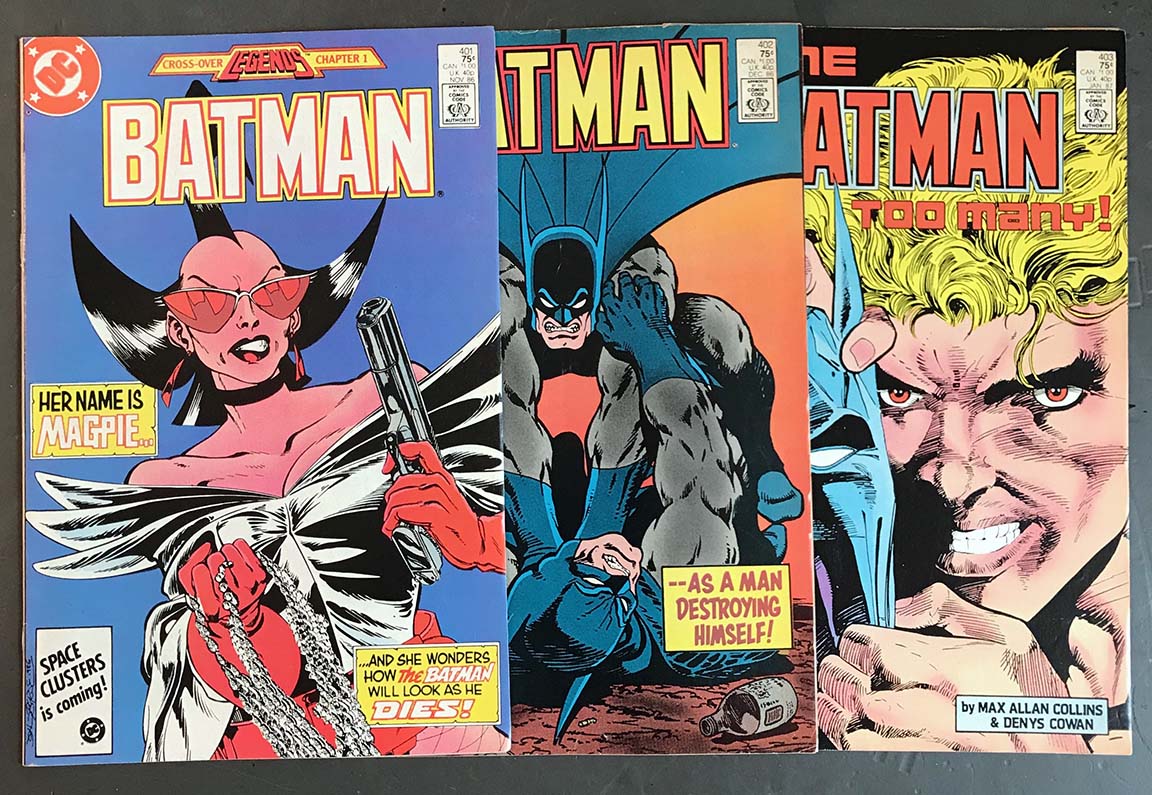 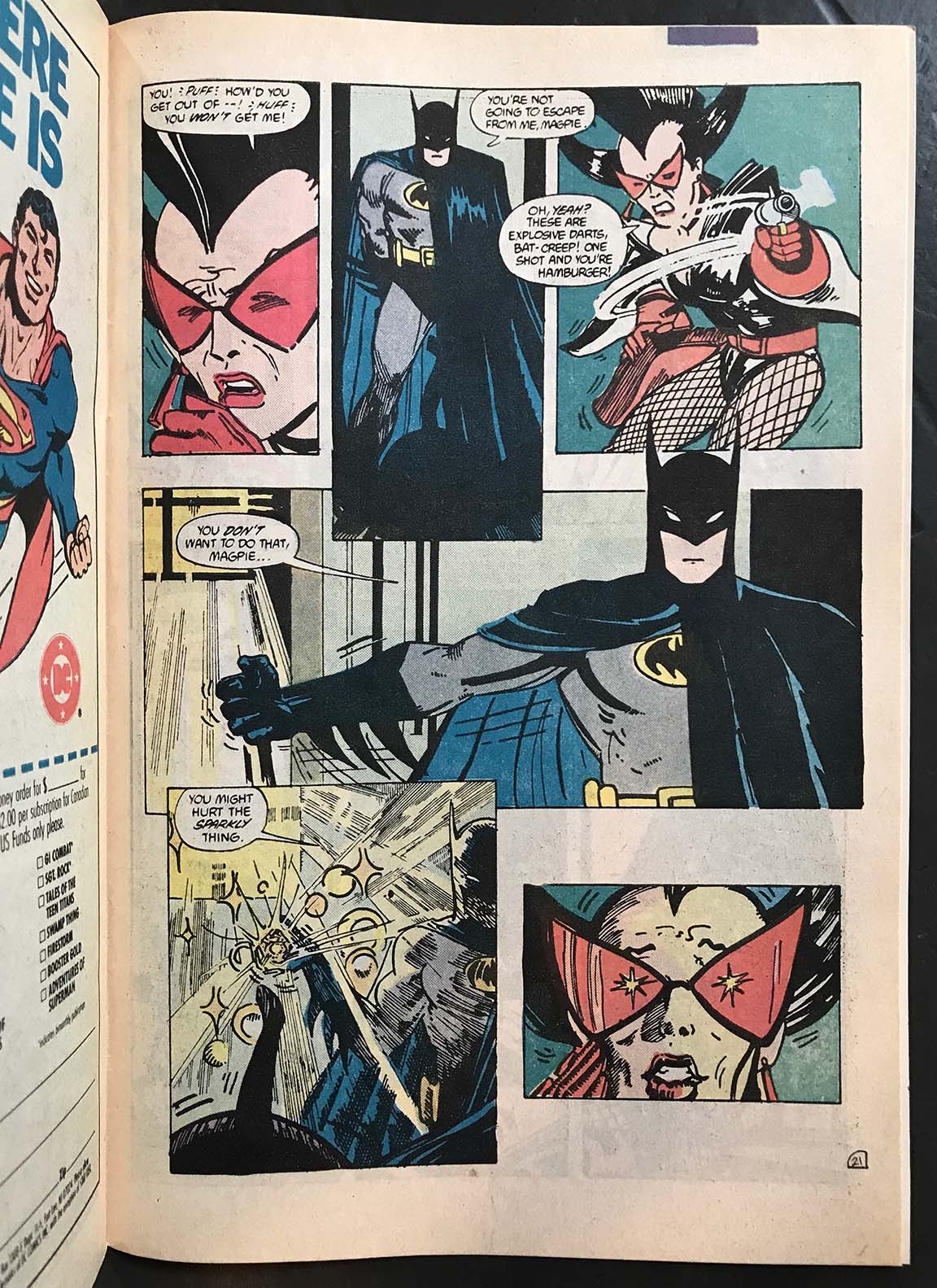 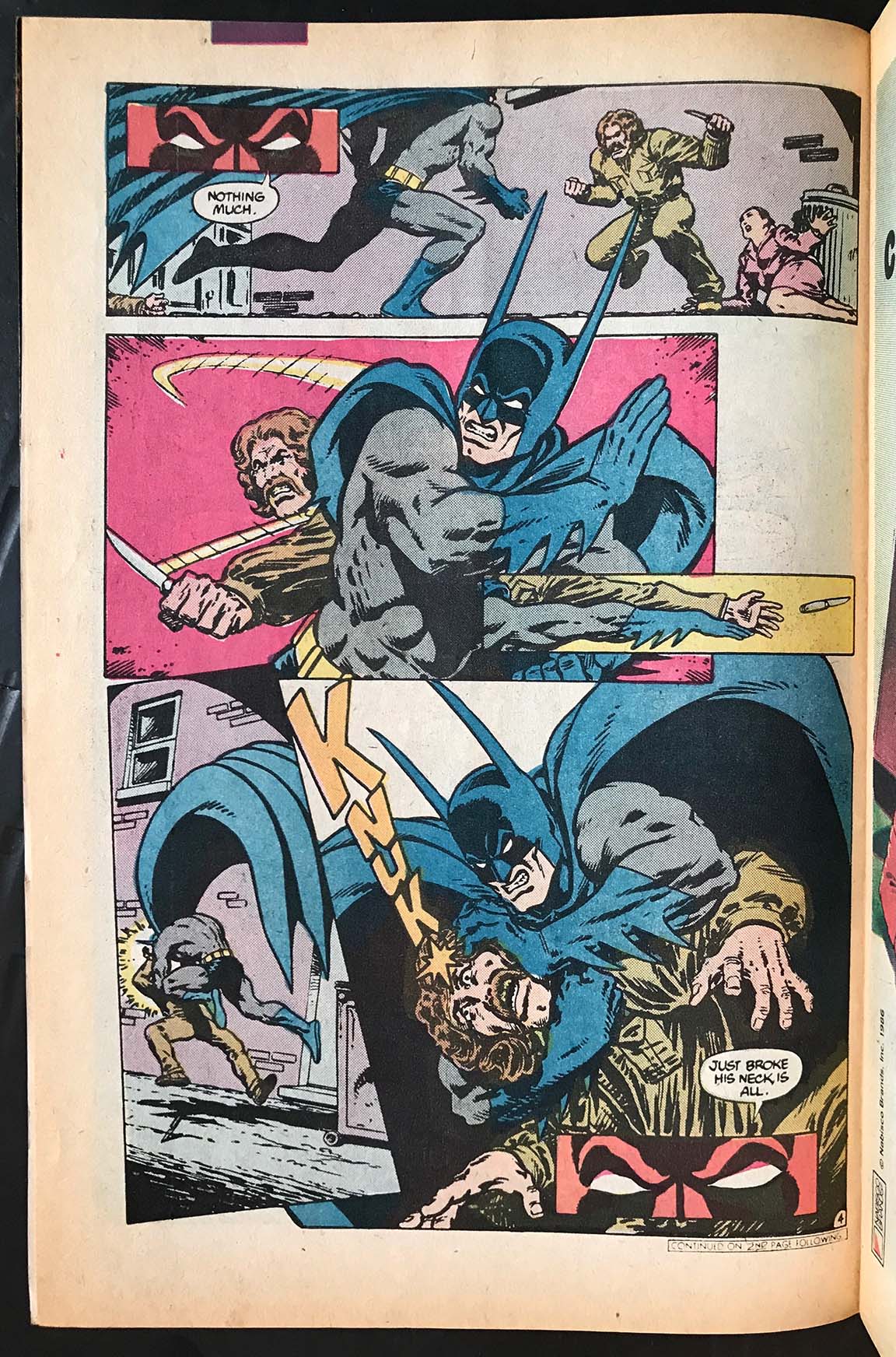 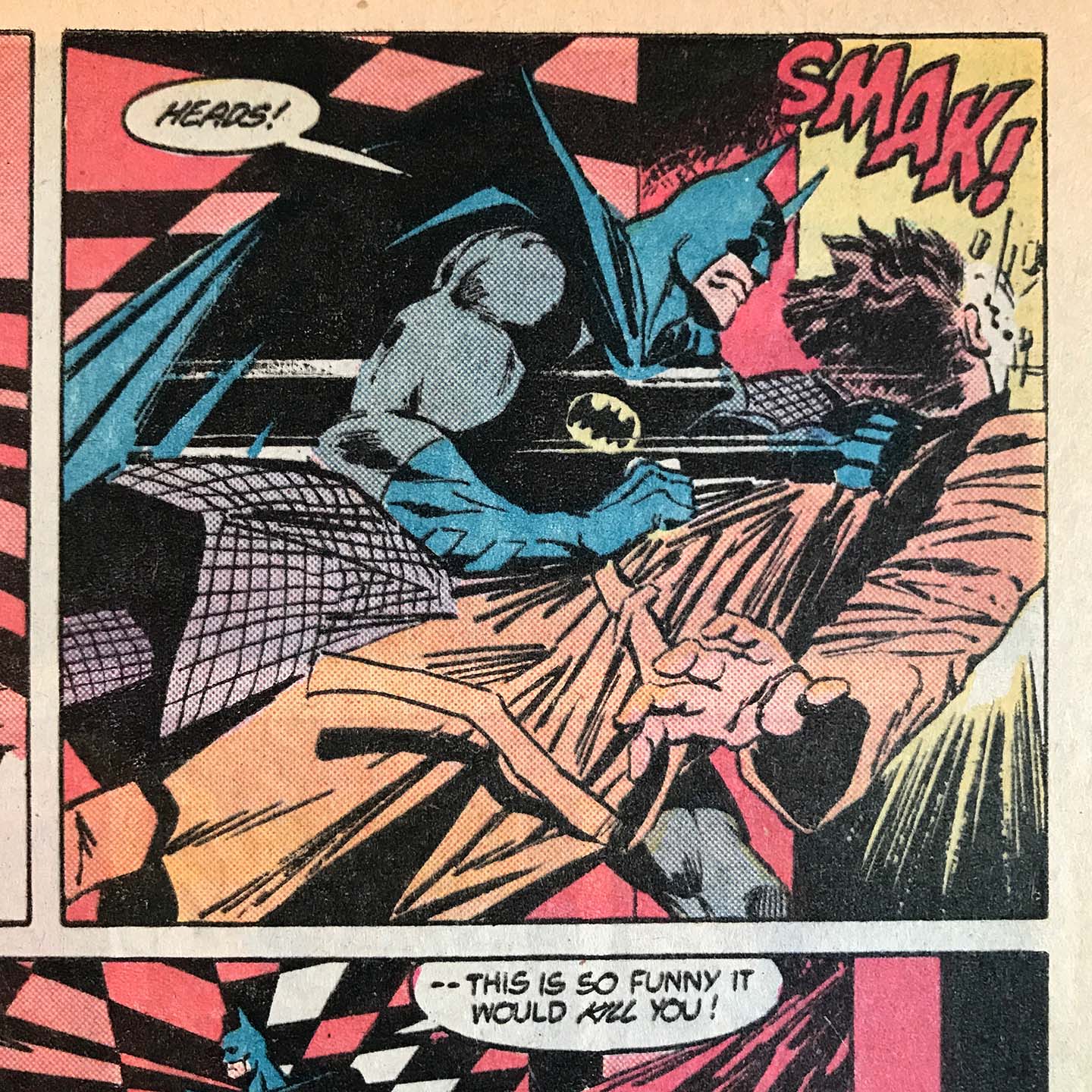 Every issue looked really different from one another, and I liked them all. Von Eeden’s clear line was really attractive, every Starlin body adorned an aging, stressed out baby head (Plus, those ears–!), and Cowan just had a cool style. 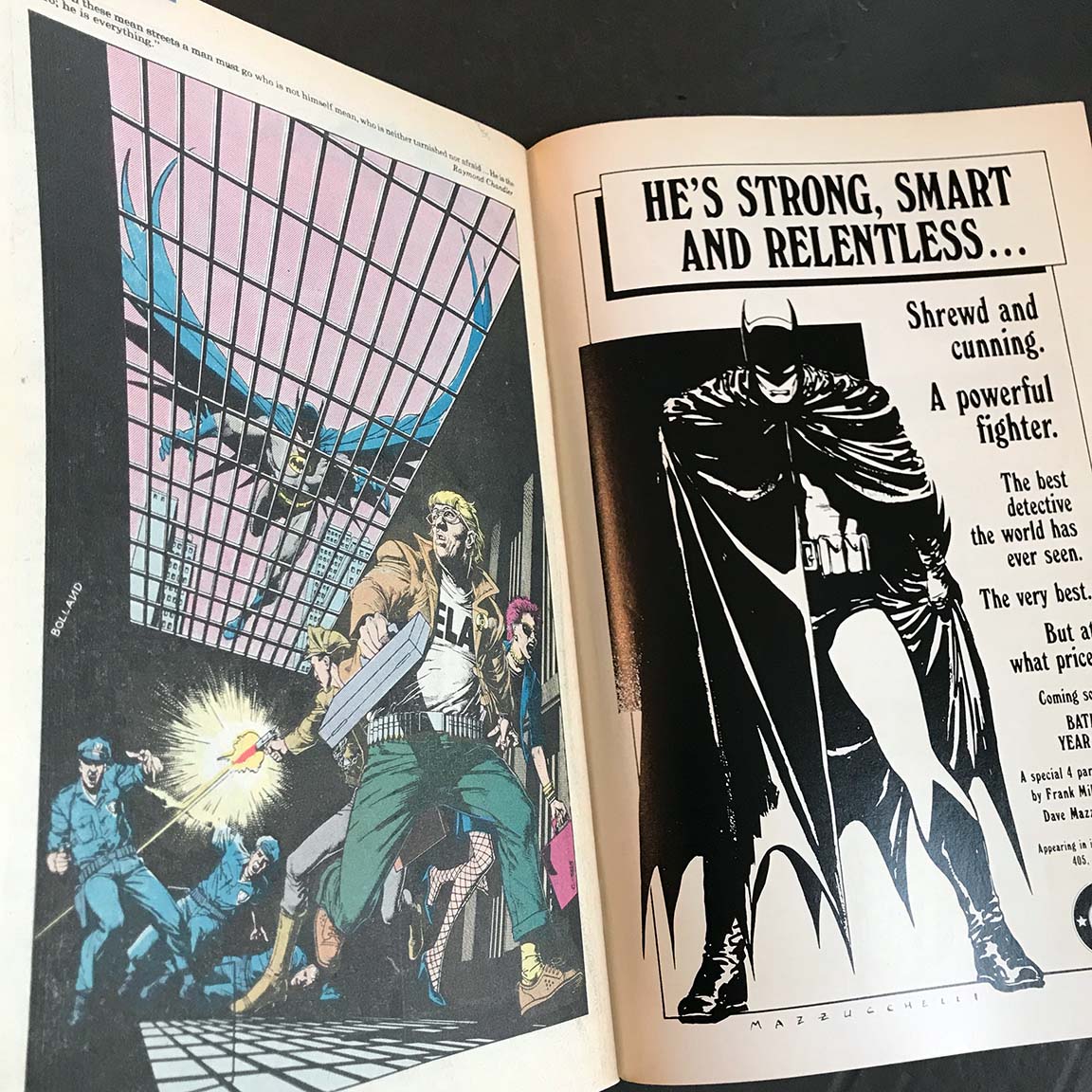 The DC packs came with a backing board that consisted of cards. Naturally, I cut along the dotted line. These opened up the DC Universe to me, especially with those covers for older comics. I can’t wait to find them in the flesh. I feel lucky that I even came across these online. 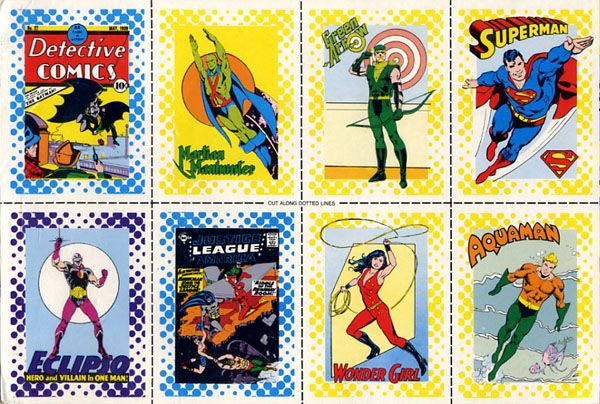 First Byrne. First time I noticed a writer and artist being the same person. I liked that. Less names in the credit box to memorize. 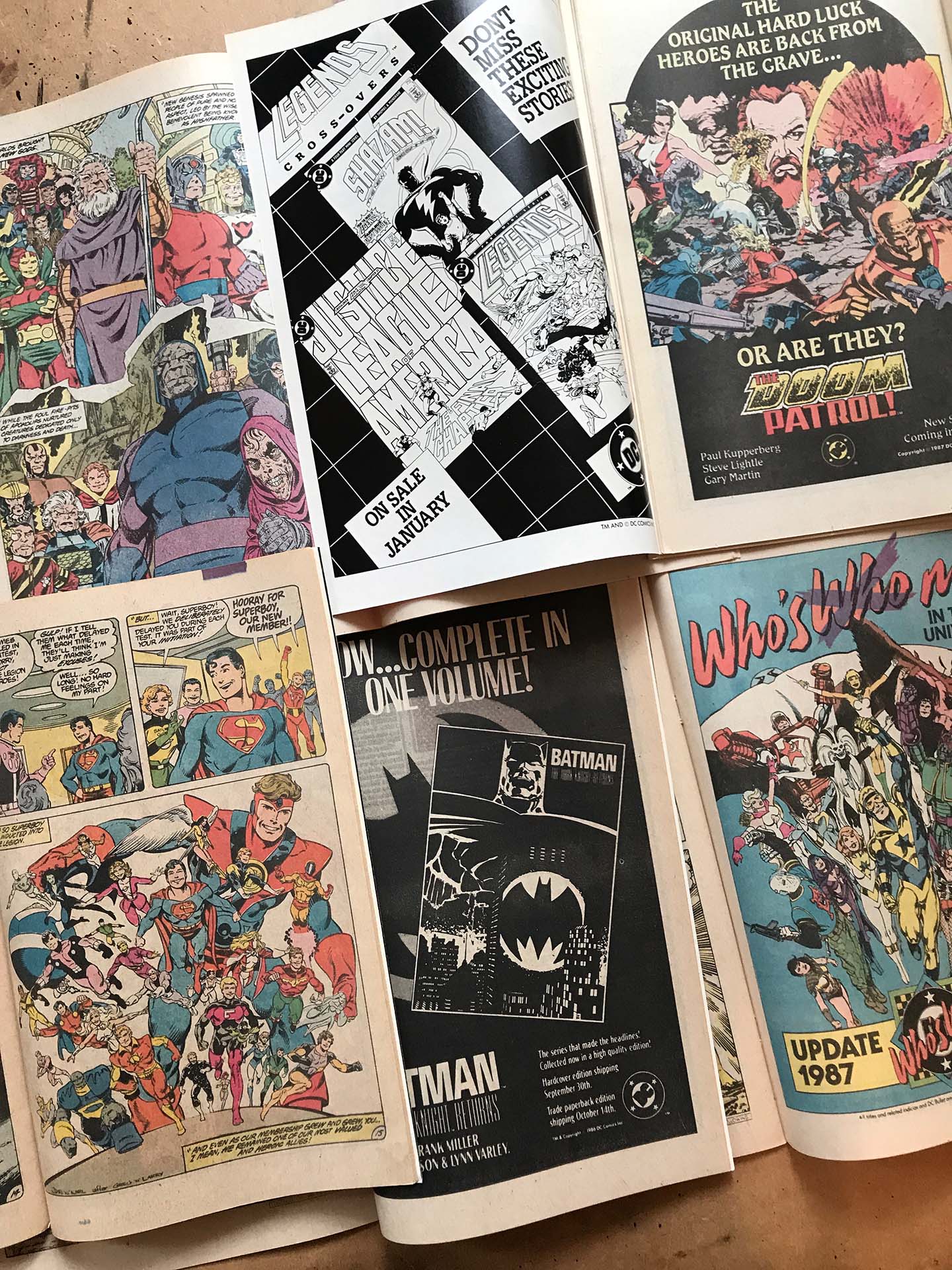 Between cameos and ads for other comics, DC was revealing itself to me in a way it had never before. Take a closer look, too — Byrne was also drawing the Legends mini-series and the Who’s Who ad. Here was a world that had a coherent and sharp aesthetic point of view. It felt solid, dependable, exciting. It was really inviting. Reader-friendly perfection, all of it.

I cannot stress enough how much of an impact these made. This is my Superman. This is peak Byrne to me. No other arrangement makes sense. Even when I went through phases of ignoring comics or scrapping huge chunks of my collection decades down the line, I always held on to these, always loved them. 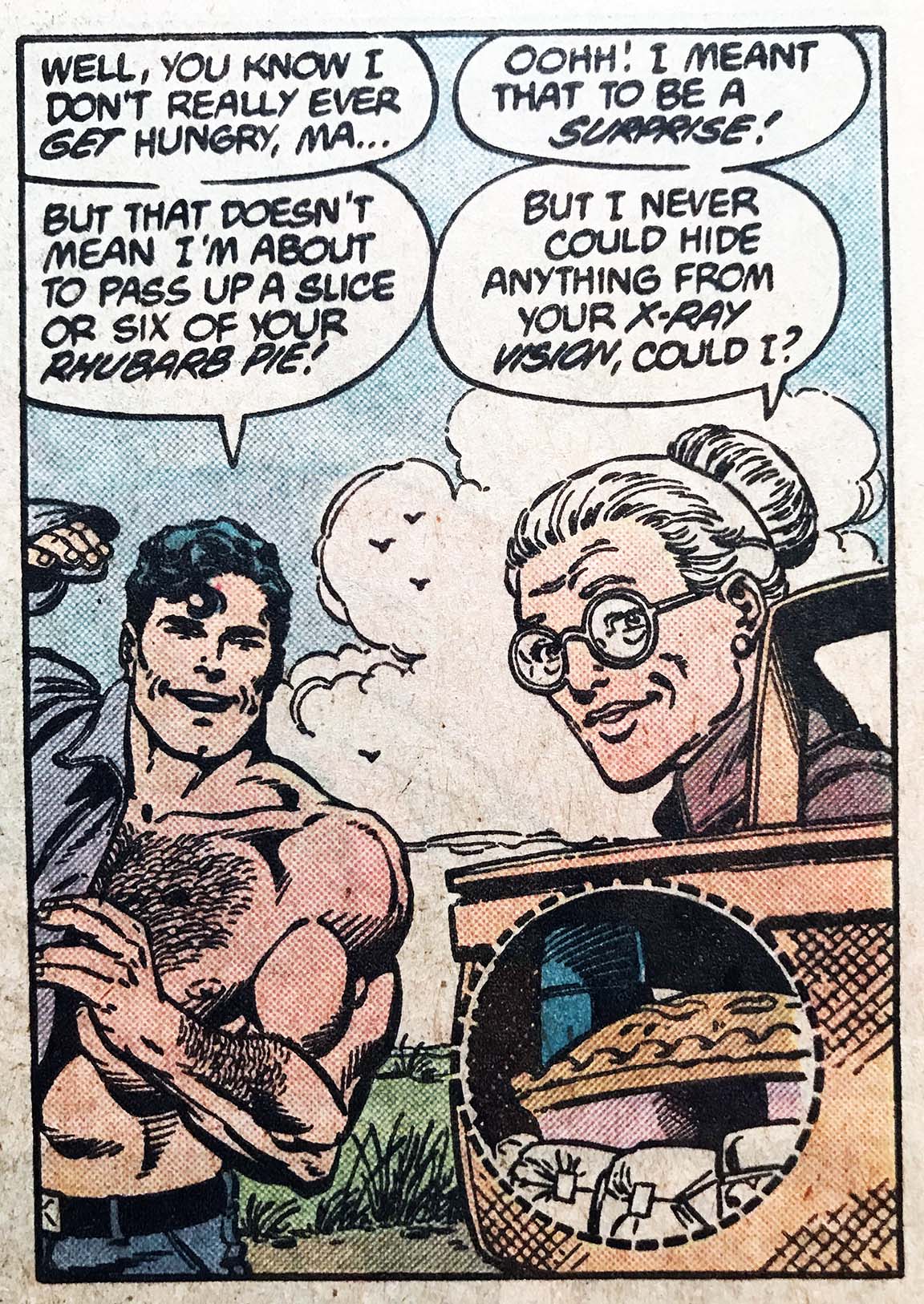 To this day I think of Clark talking to Ma Kent whenever I hear rhubarb pie. 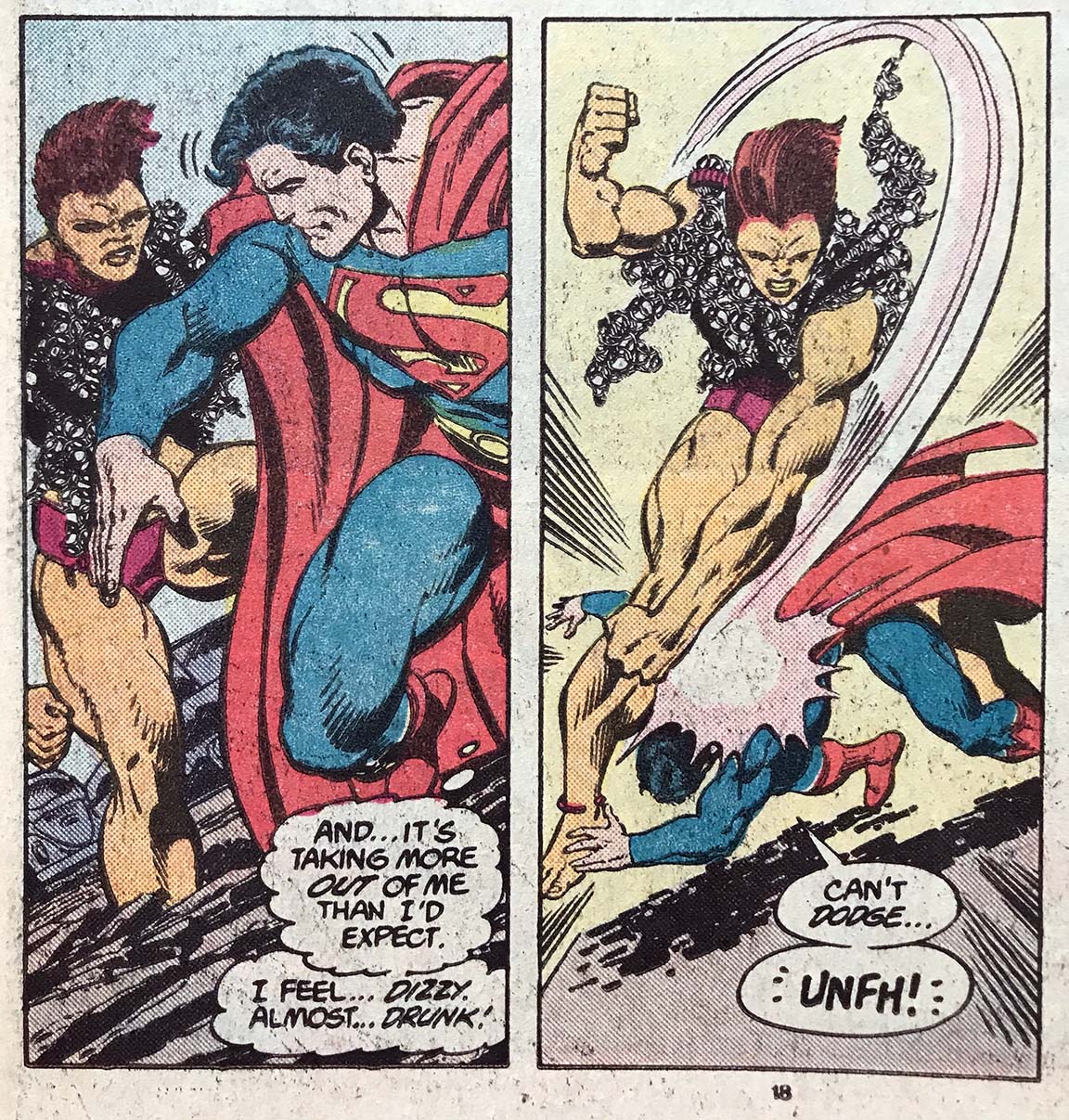 With this sudden re-interest in the form, comics knocked me out with an old one-two. Byrne was the jab, the cross was around the corner.