I’ve been drawing fight scenes more than usual recently – what action comic is complete without a few of them? – which got me thinking about some of my favorite comic book brawls. There are hundreds of superhero fights that I can recall quicker than people’s birthdays or important passwords and forgive me if I’m wrong, but I bet your memory’s probably  identical to mine. From the banal and obligatory to the inspired and well crafted, we’ve all seen a wide range of slugfests.

Is it the choreography in service of mayhem? Is it an appreciation for impossible anatomy? Is it that smattering of blood on the corner of a mouth?  Is it not worth examining at all? Too late! 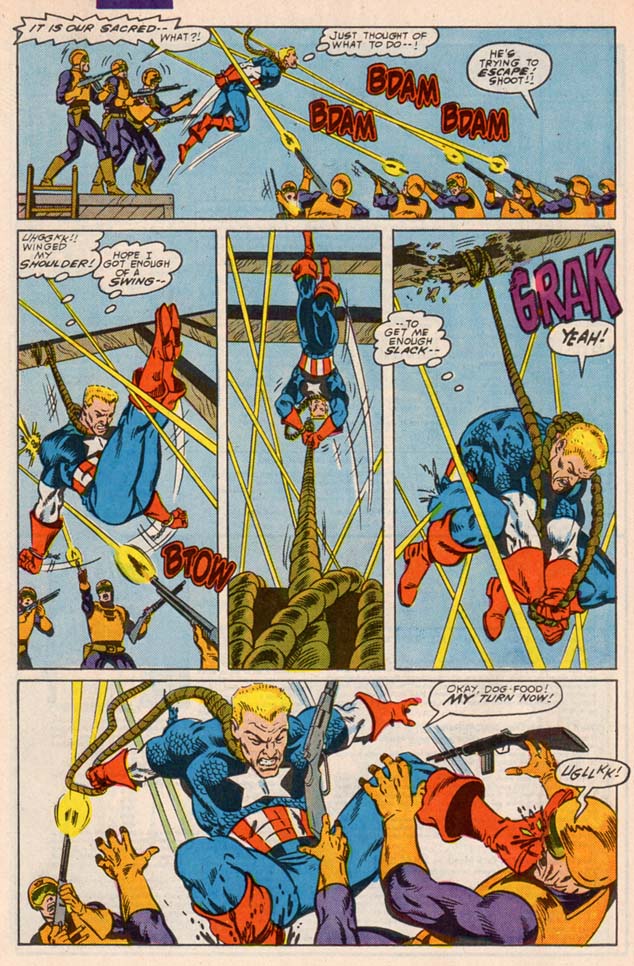 Captain America #345 by Mark Gruendwald, Kieron Dwyer and Al Milgrom. I have a soft spot for the Gruenwald-era Captain America. The Ron Lim drawn issues are great, especially Streets of Poison where Cap absorbs a warehouse worth of cocaine & gives Daredevil a beatdown, but the Dwyer issues are in a class by themselves (he had been drawing comics for about a year by the time this issue came out). 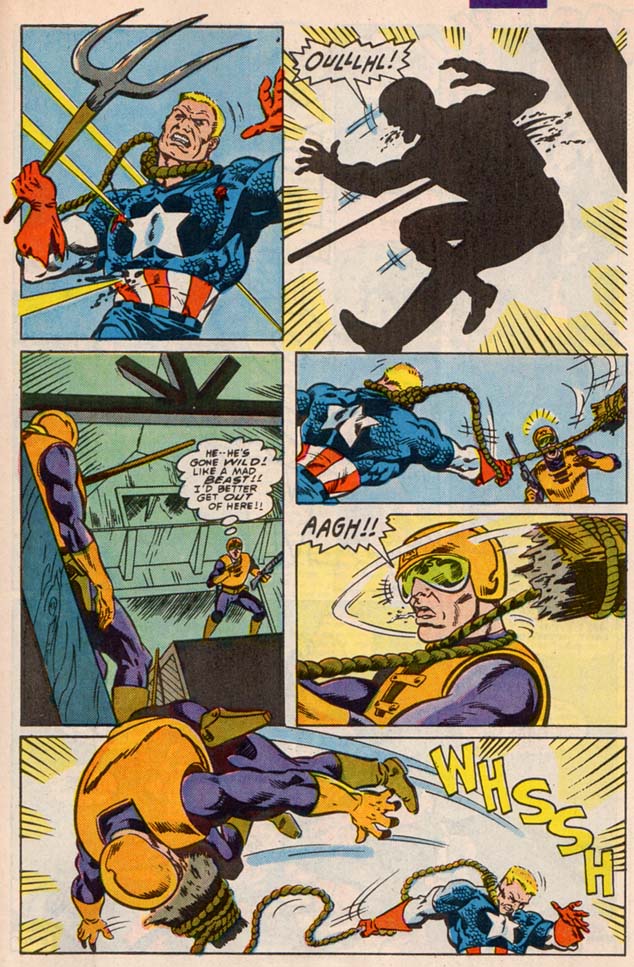 This Code-approved scene is half shoot out, half hands-on massacre. It was a 75 cent instant classic.

Legion of Super-Heroes #4 by Keith Giffen, Tom & Mary Bierbaum and Al Gordon. This is about as abstract as a cosmic battle is ever going to be in a DC comic, but what makes it awesome is that it’s a fight between Mon-El (red, caped) and the Time Trapper (see: all that sand), meaning he’s fighting basically the concept of time itself (as well as the Superman editorial offices of ’90). 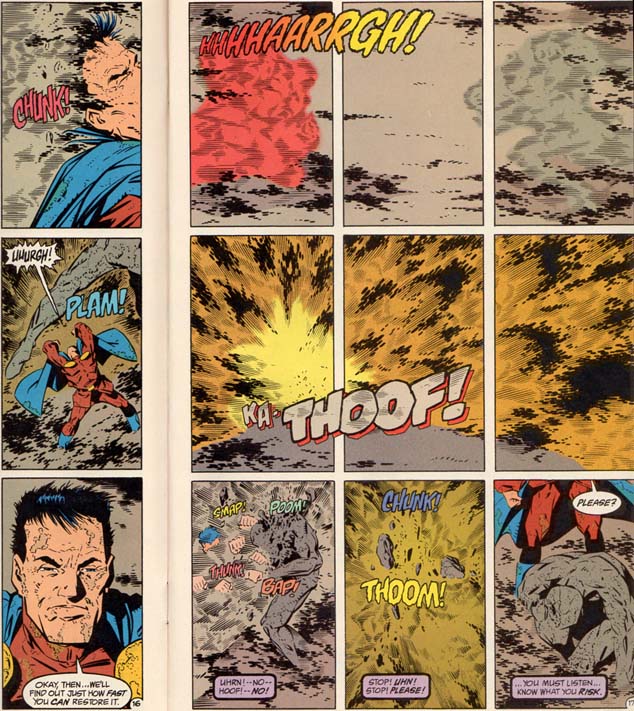 I used to dislike the impenetrability of these Legion comics. These days, I love it, especially if they were drawn by Giffen.

Justice League Europe #11 by William Messner -Loebs and Bart Sears (plotted by Giffen same month as the Legion issue up there… wow!). This fight’s pretty brief, which should appease all those whiners who begin their sentences with “In real life, a fight wouldn’t last as long as–“. 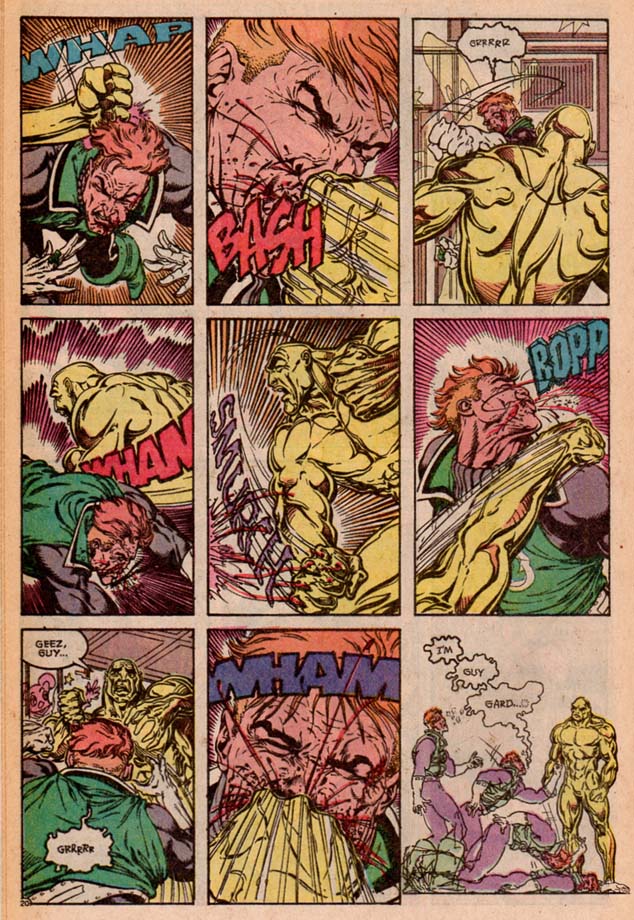 Anyway, you wanna talk about brief? How about “One punch!” (If you got that reference, congratulations/shame on you).

Orion #5 by Walter Simonson. This is an All-Fight issue between father and son, Orion and Darkseid. It’s an incredibly paced fight, this one. I’ll say it here: Orion contains many instances of innovative action-storytelling. It’s some of Simonson’s best work, and his love for the material only strengthens it. Toward the end of the run it gets a little wonky (when he has to draw regular people eating hot dogs or walking), but the majority of this run is page for page forward-looking superhero comics. 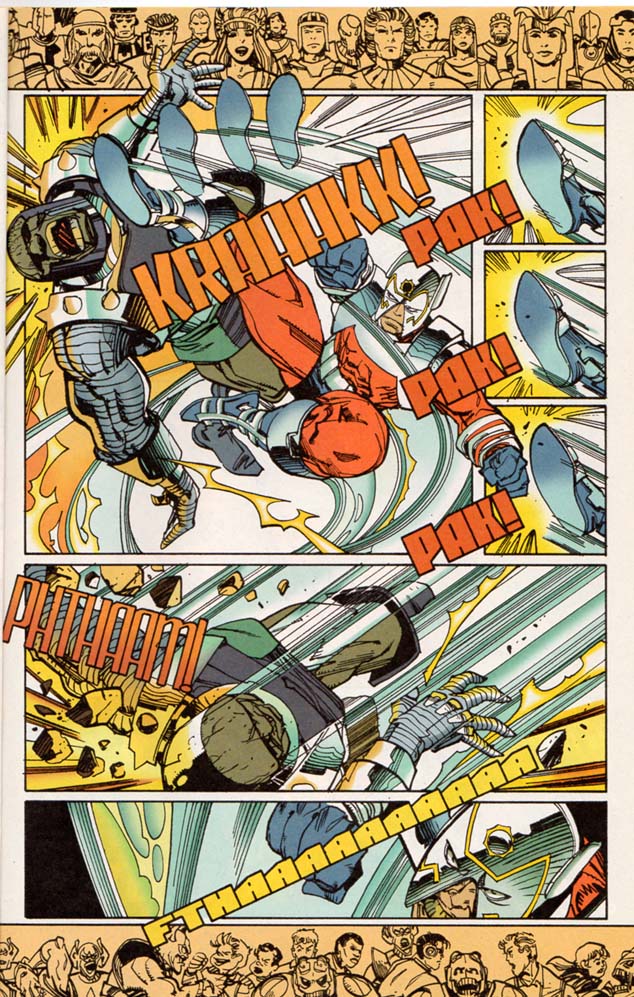 Amazing Spider-Man #4 by Stan Lee and God Himself. Not only is this one of the best fights ever, it’s the quintessential Spider-Man story. It has all the staples: teen angst, young romance, awesome villain, humiliation during battle, worried aunt, hateful boss, public ridicule, wisecracks, isolation. You really don’t need to go further than this one issue; it goes off the rails after this. 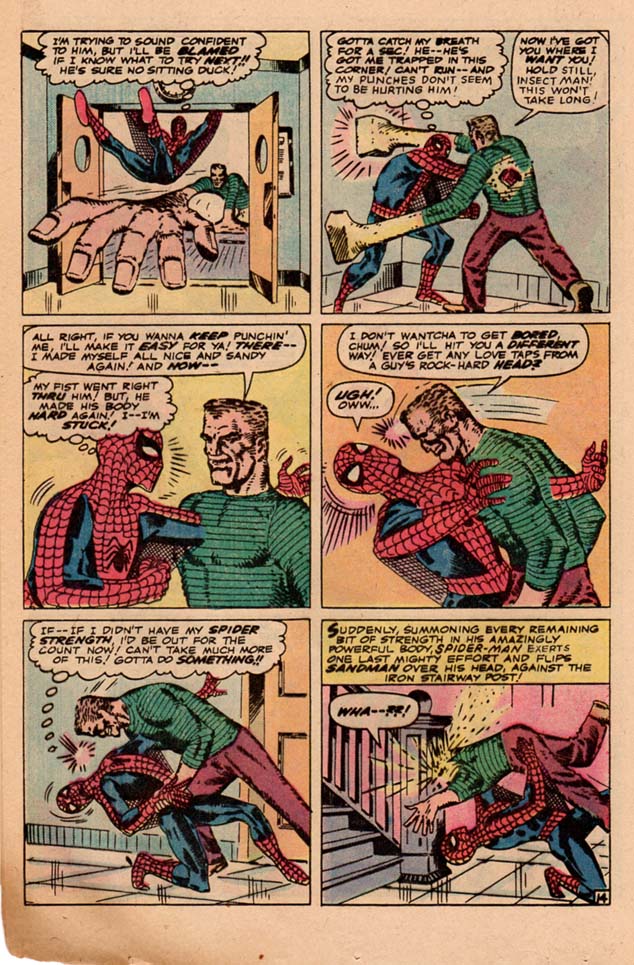 Okay. Steve Ditko. There, I said it.

The Uncanny X-men #173 by Chris Claremont, Paul Smith and Bob Wiacek. Ah, the Smith run on the X-men, a highlight for many X-fans. His trajectory is interesting because, not unlike Dwyer, it was during Smith’s first year when he landed the gig that defined his career. He rocketed into fandom heights almost immediately, rode the X-wave for a year, then came close to burning out. This issue may be the apex of that initial run, but definitely the one that personally influenced me.

I recently paid homage to this widescreen battle in a recent issue of Copra (the one where they also go to Tokyo), and although Smith was carrying over the style set forth by Frank Miller (in the Wolverine mini-series tied to this issue), it was this story that made an impression on me. 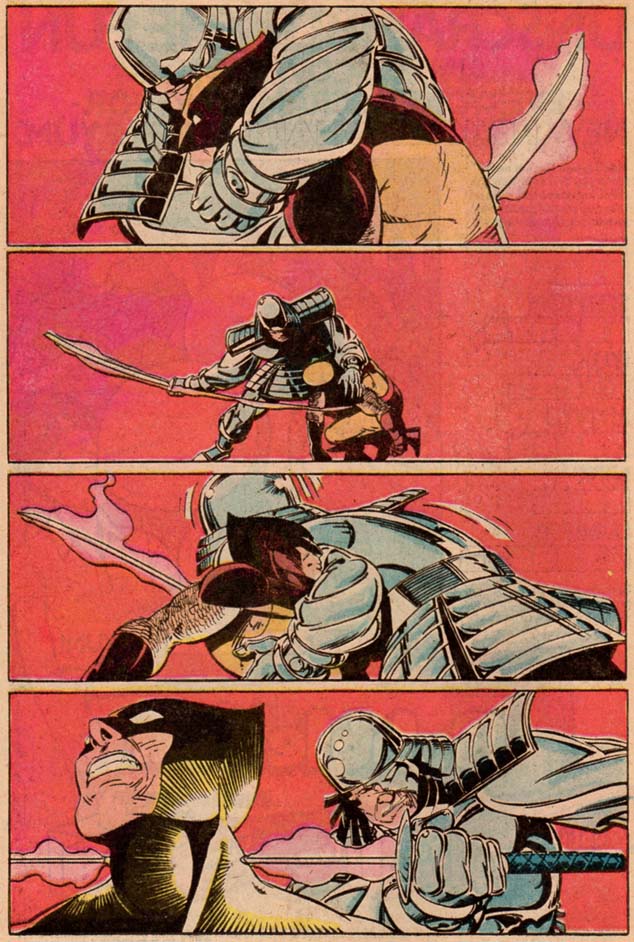 Speaking of things I’ve recently tried to pull off, how about battle royal match-type of fights? I can’t think of any standout examples with a huge cast of characters (well, this milestone goes without saying). You know what? I don’t even wanna know. Somebody’s bound to say Secret Wars and I’m not ready to deal with their warped sense of history or taste.

Isn’t it weird when an artist actaully knows some martial arts and then draws a step-by-step of what he knows but passes it off as a narrative? The O’Neil/Cowan Question had a lot of that. So did Mike Baron comics.  I get trying to be faithful to the art form of self defense, but sometimes I just want a clumsy pair of fists to operatically connect with someone’s cheekbone.

“Honorable Mention” and “Runner Up” sounds wrong, so I’ll sidestep my personal Top Fight list to admit that, undeniably, the master of the superhero fight scene is Jack Kirby (oh, yes he is). Frank Miller is up there, especially when he’s the one drawing it (don’t deny it, you). Erik Larsen has cornered the market on big hands that punch things (tell me I’m wrong). Frank Quietly’s Authority had epically drawn moments of violence (okay, don’t tell me). Recently, James Harren has produced some of the best tighten-up-release carnage I’ve seen since Berserk (stop it).

And hey, you know I’m talking exclusively about American mainstream comics, right? I know all about some of the very best outside of that: Chester Gould’s Dick Tracy. Johnny Ryan’s Prison Pit. The comics of Wong Yuk-long. These are all works of beauty, just like the list I laid out. Every knuckle, every grimace, every drop of blood, all modest examples as to why comic book fighting is so present, so central to the landscape. It represents what comics are so impossibly good at being, all in one shot: awkward and graceful and ridiculous. 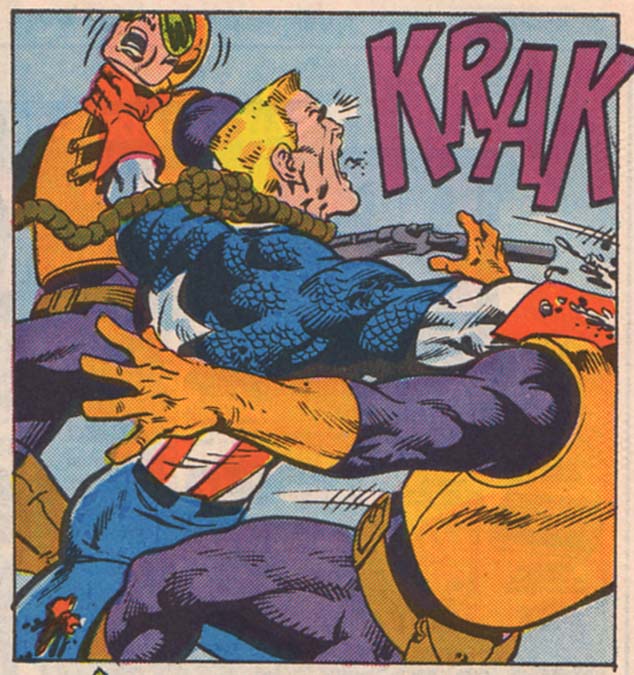 Cap just threw a pitchfork into that guy? How does he sleep at night?

He closes his eyes.

Oh, man. You and I definitely have a similar “pedigree” when it comes to our comic reading. Dwyer is one of my favorite artist, mainly due to his work on Captain America when I was first reading it (and that “Streets of Poison” storyline was a fave as well).

I had trouble getting into the X-Men, but If I had an X-guy, it would be Smith. Love his work, on anything.

And Simonson on Orion – I love that more than his Thor stuff, which is sacrilege in some areas of the country, I know.

And, as usual, COPRA kicked ass with issue #6. Was so happy to find it in my mailbox earlier this week. Made sure I wrapped up my writing that night in time to sit down and read it. Thanks for that.

Oh, and I forgot to mention the Mastery of Ditko’s Spider-Man. (or maybe my subconscious knew I should set it apart in its own response, hmmmmmm.)

I hate those Marvel (and now, DC) Omnibi. They’re too damn big, you can’t stand them up on a shelf for fear of wrecking the binding, you can’t read them on “the can” or easily in bed, and they’re just too damn big. (Did I mention they’re big?). But when that first Spider-Man one was solicited, there was no way I was going to pass up getting it. I love, love, love Ditko’s Spider-Man, and have thoroughly enjoyed and appreciated that omnibus – the exception proving my totally subjective rule.

And let’s not forget that that was the replacement Cap, John Walker aka USAgent. He had fewer qualms about throwing pitchforks into people.

Love the Gruenwald run on Cap, too.

Note that the JLE page would have been laid out by Giffen as well.

[…] fighting dudes with jetpacks. This almost begs its own scene, especially since, as Michael Fiffe shows, punching is dynamic. Have the spell-casting relegated to the single panels, and the magic might […]