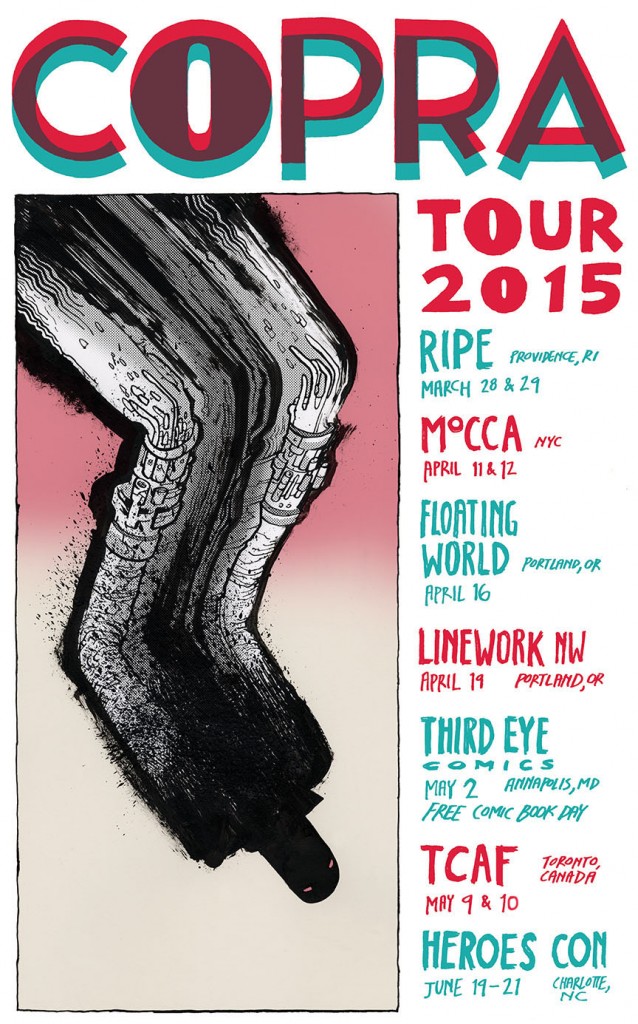 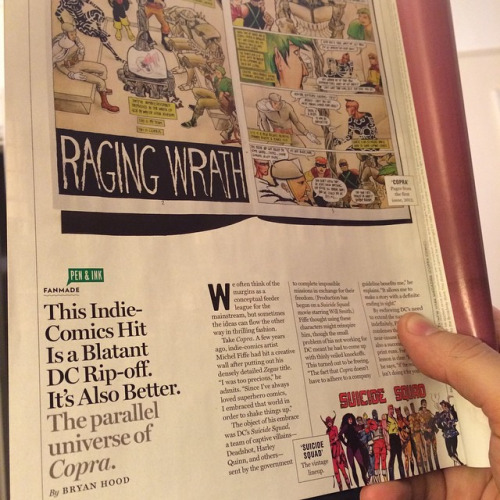 New York Magazine – Copra through the lens of fanfic.

Comics Tavern – brief interview where I say stuff like:

“The only thing I personally hope this Suicide Squad movie does is raise enough interest in the John Ostrander/Kim Yale series to the point where DC puts it back into print, hopefully benefiting Ostrander. That run deserves to be on the shelves, high amongst the classics and making everything else pale in comparison.” 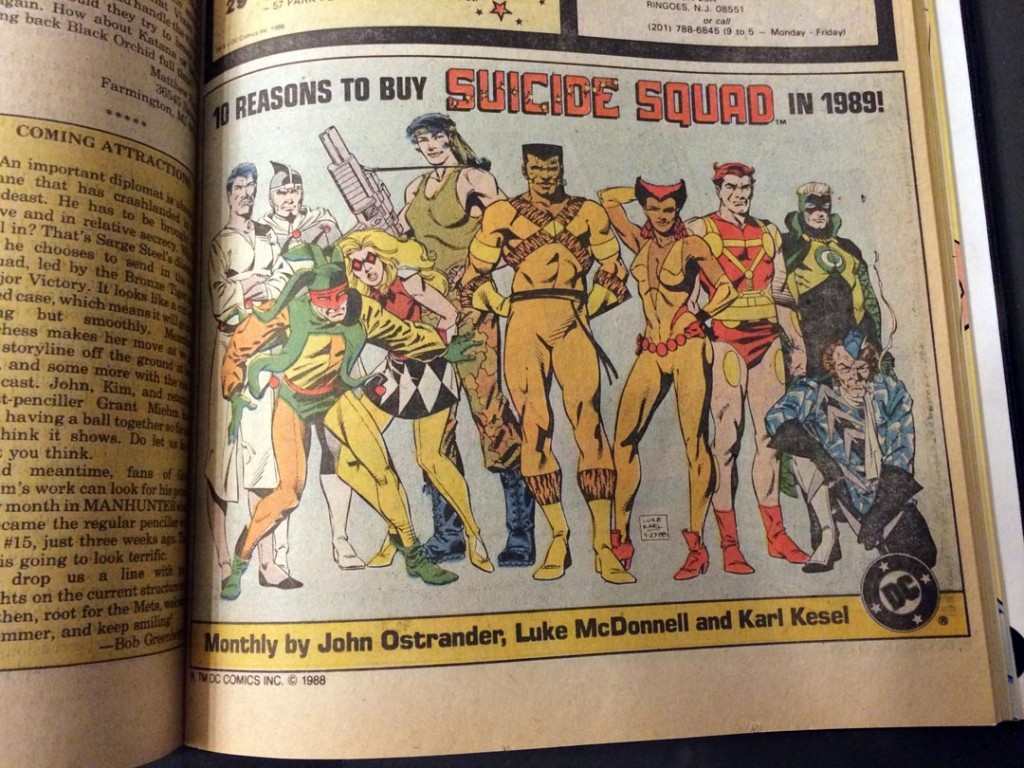 It’s as good a time as any to talk about my love for the Suicide Squad. It’s a specific kind of love. 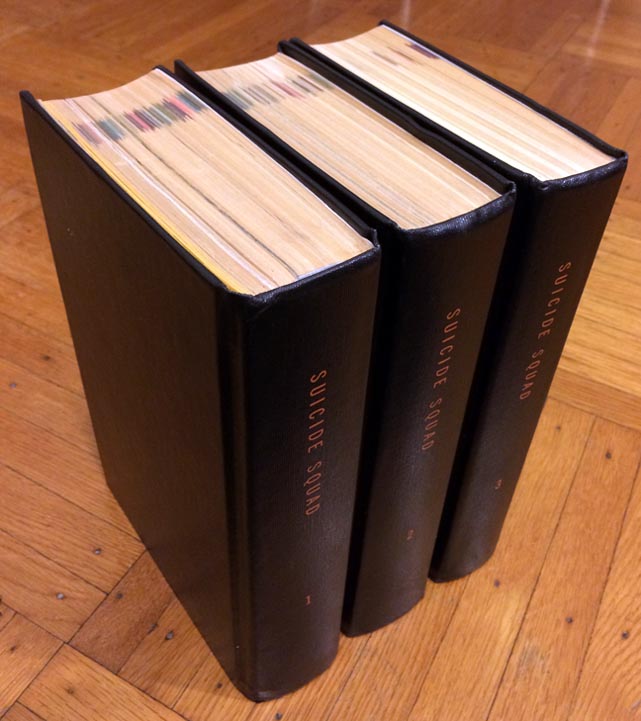 Let’s start with this bound collection of comics: every issue, every crossover, every letters page, every Who’s Who entry, every pertinent sheet of Squad related newsprint or baxter paper is included here (ending with the final issue #66, of course. Anything after that just gets in the way of the best ending this series could hope to have). I spent a while compiling these books, putting them in a very specific order. I cannot stress that enough; Very. Specific. Order.

Having these comics bound in such direct, no frills hardcovers made reading & storage so much more enjoyable & practical, but I also loved the idea of a curated collection of essentials. For this specific set of books, I got the idea to hit up a few of the related artists to put their own touch on the inside covers… 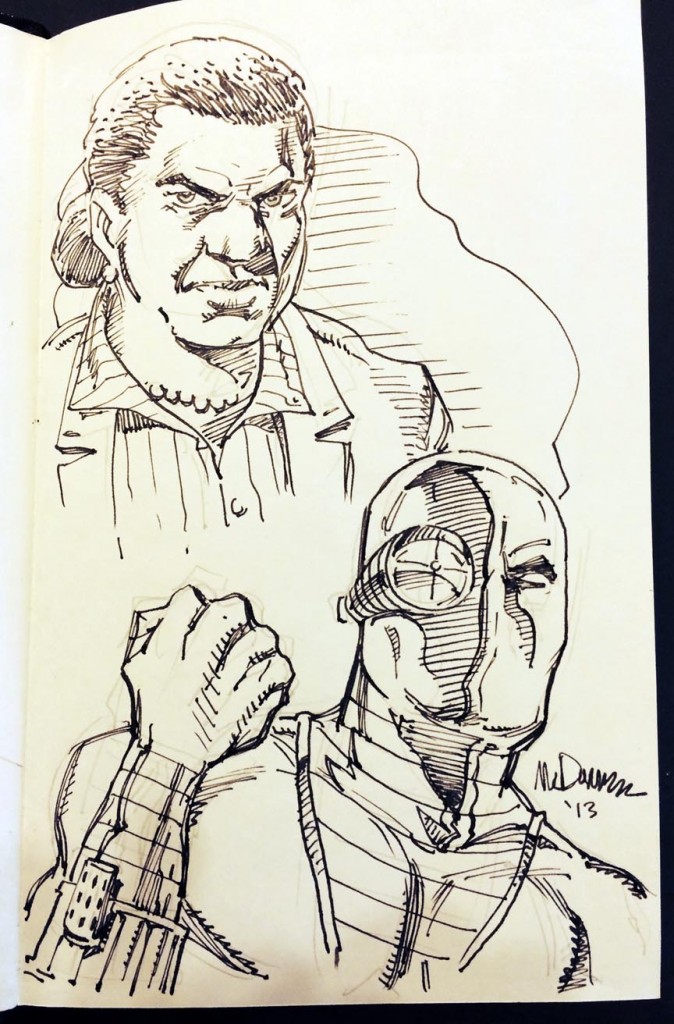 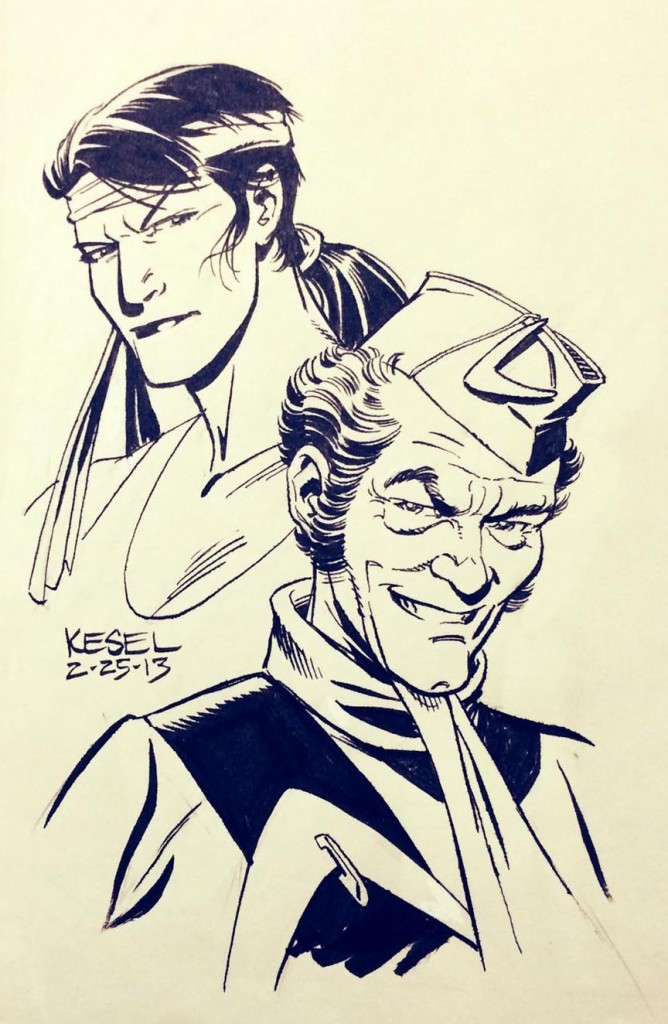 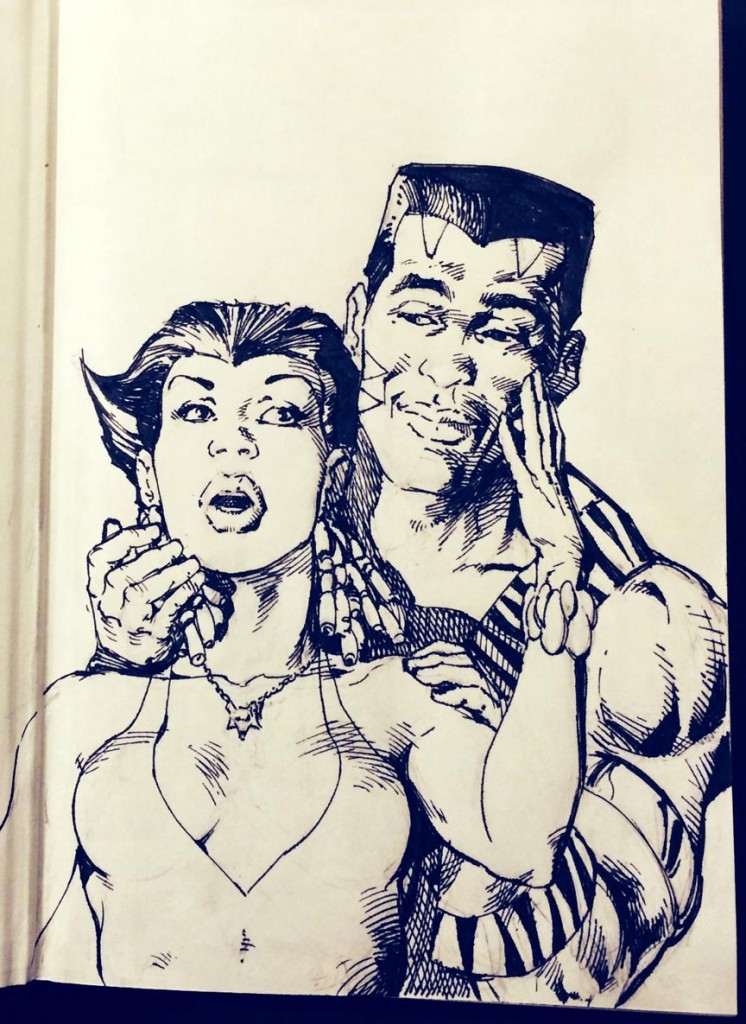 These busy gentlemen were kind enough to honor my character requests & deal with book shipping (since none of these were convention commissions). Their efforts and patience remain appreciated.

Oh, god, it doesn’t stop there. I had to have the RPGs… 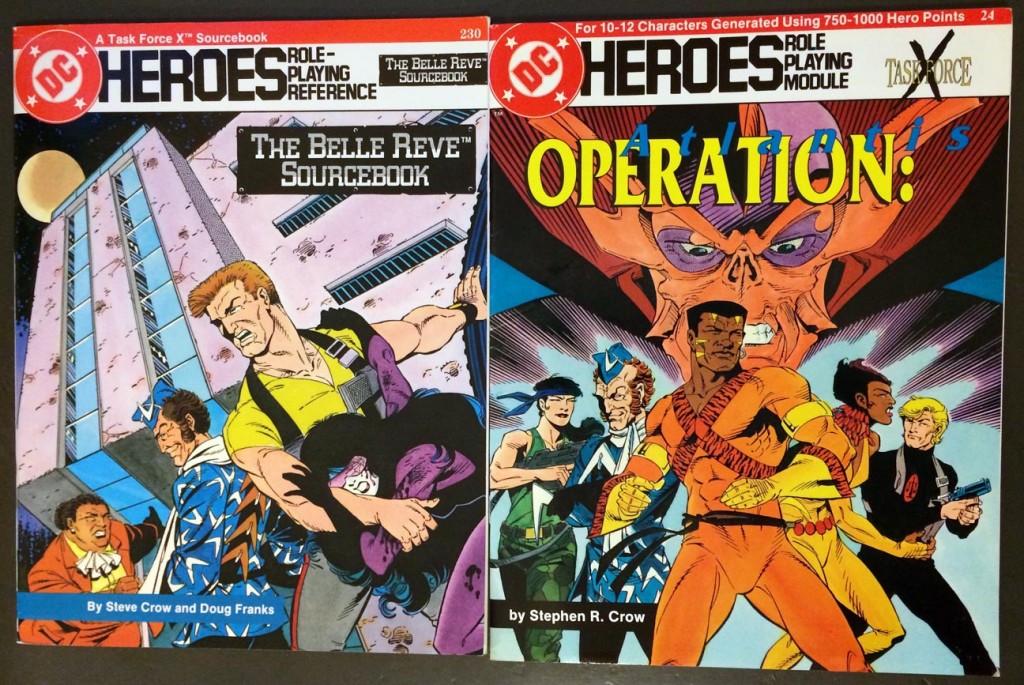 … the Who’s Who loose leaf entires… 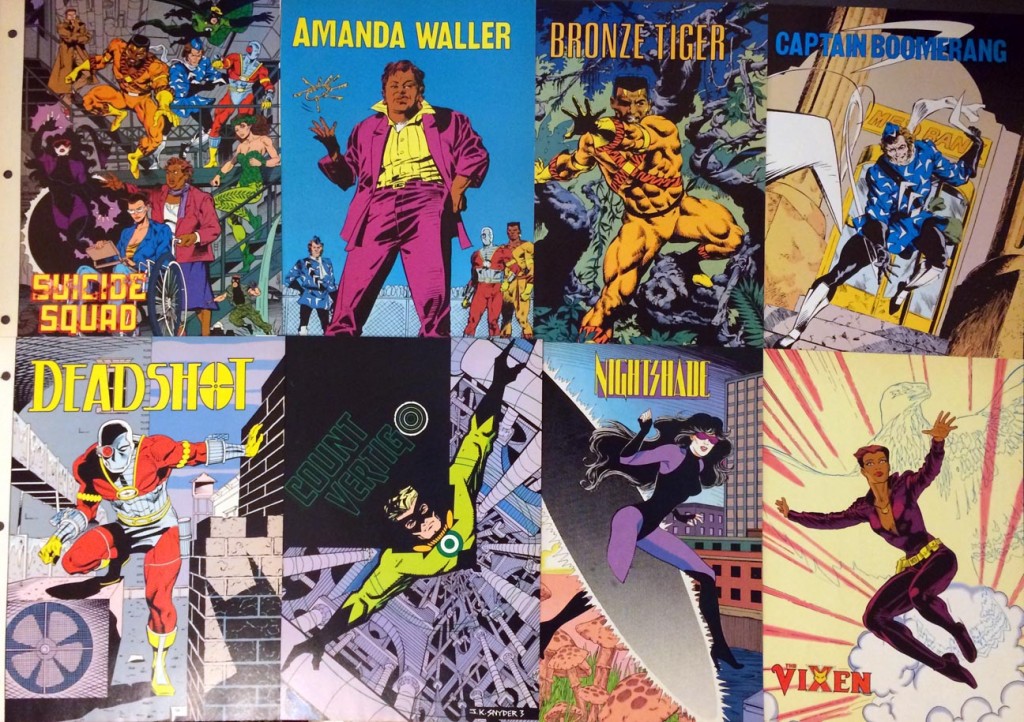 … and the cards. The trading cards. 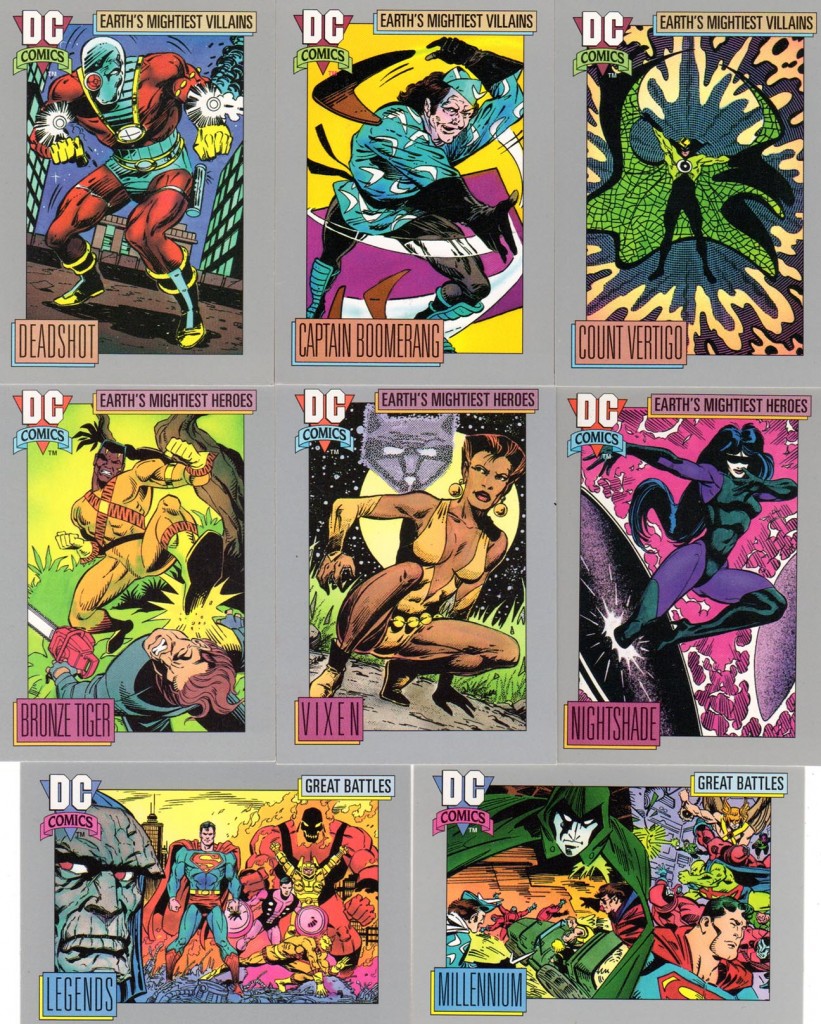 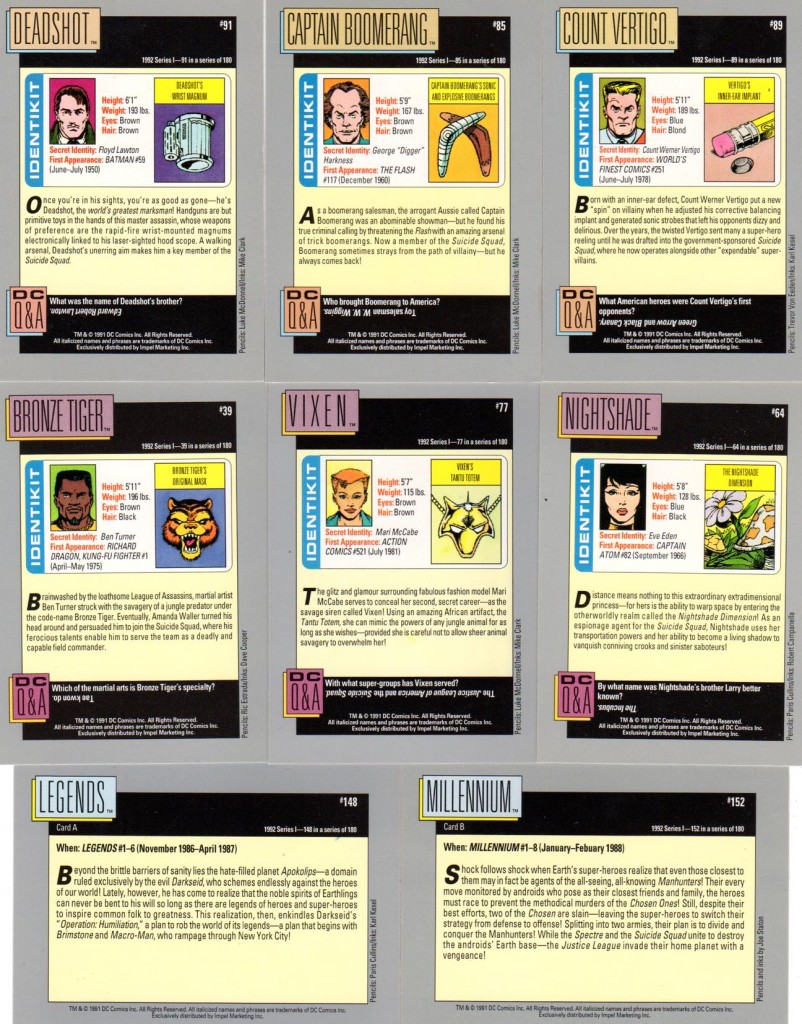 I’m perfectly fine with drawing the line when it comes to toys, statues, cartoon appearances, or cosplay. Toys would be cool, actually, but I’m into the art more than anything else when it comes to any sort of non-comics merch. Really, all I care about are the comics.

I really like the way these books turned out (thanks to Houchen Bindery Ltd). Took me years to plan and assemble and I loved every second of it. I can see how one can get swept in the excitement of binding everything, but I think it’s safe to say that there are not many titles I feel this passionately about. 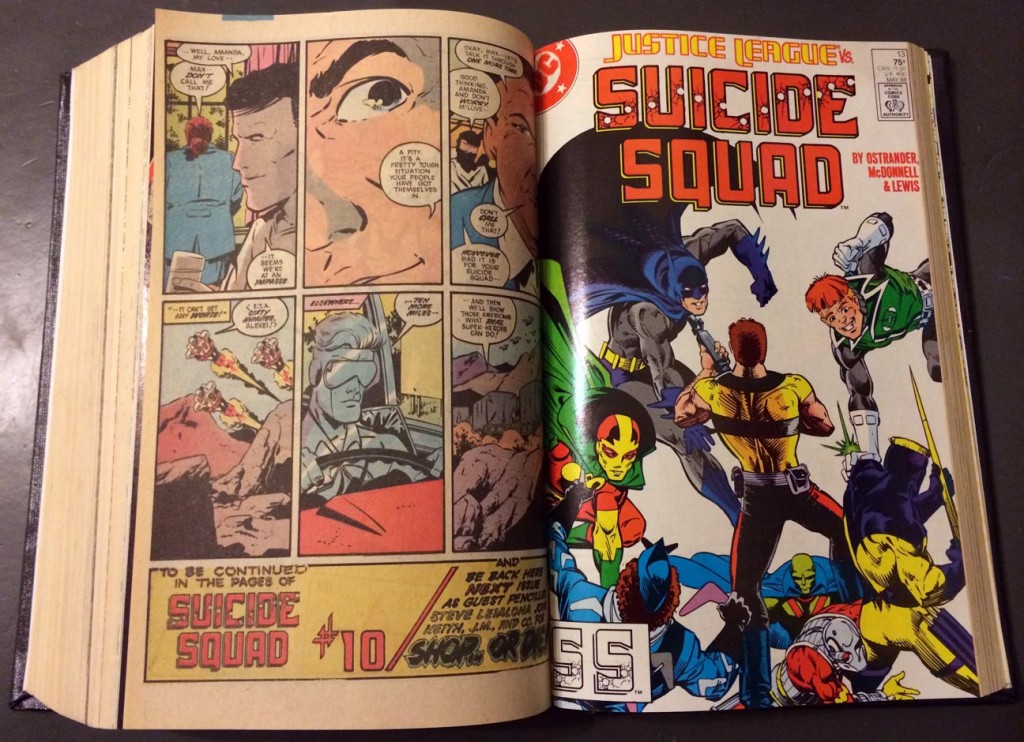 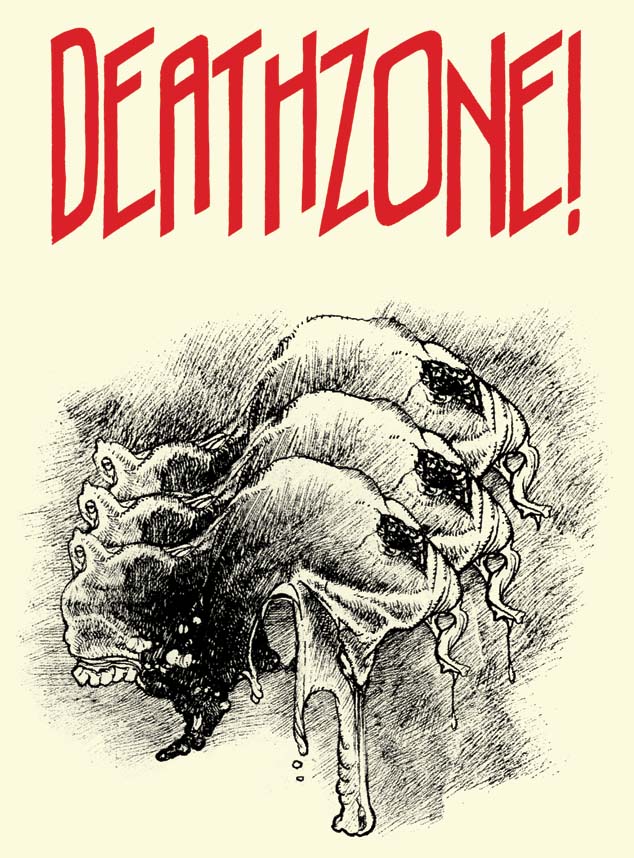 I told myself that it was a silly idea, that it was nothing but a distraction, a nostalgic impulse at best, and that I had more important things to do. Next thing I knew, I had written, drawn, and colored sixteen pages of my very own Suicide Squad comic. I called it DEATHZONE! 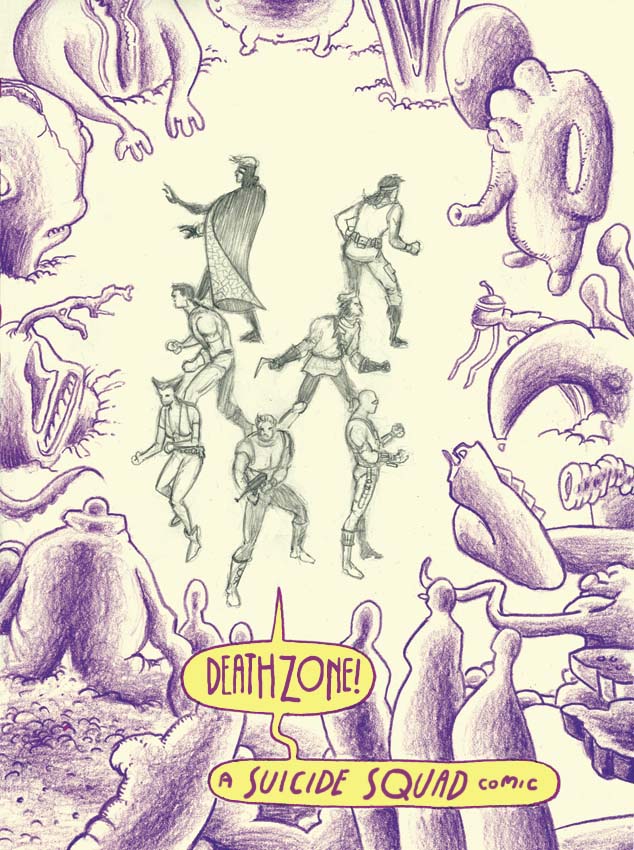 You know about the Suicide Squad already, right? I’ve gone on about it before, and always kept a close eye on those who did the same. It was one of my very first and favorite comics as a kid, and during the tail end of my previous project, I couldn’t get them out of my mind. 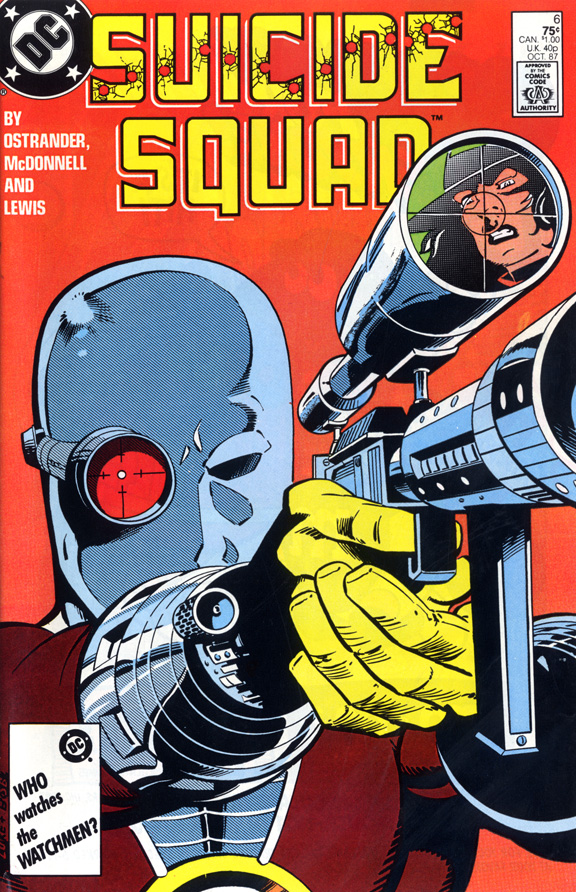 Recap: Suicide Squad was DC Comics’ version of the Dirty Dozen. John Ostrander wrote it, Luke McDonnell drew it, and John’s late wife, Kim Yale, joined in on the writing chores early on. Suicide Squad was a task force made up of C-list bad guys and obscure, throwaway characters used as fodder for dangerous government missions. Some of them didn’t always make it back. Turnover was pretty high as a result. Just look at the line up below… that’s only the first year’s roster. Also, they lived in a prison in the middle of a swamp. 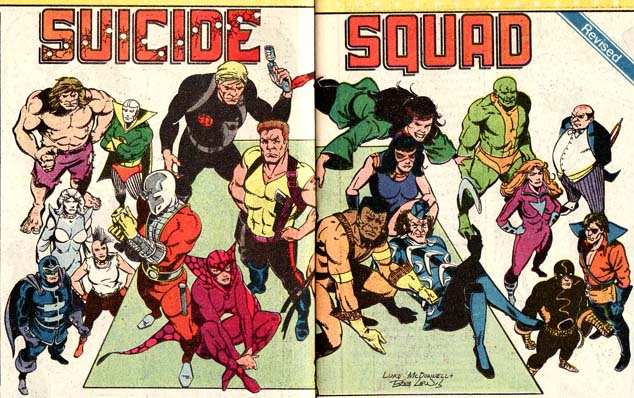 One of my favorite issues is #10 (Feb. ’88), “Up Against The Wall”, where Batman pretends to be a prisoner in order to get some dirt on the Squad. He’s then outed, hunted, and taken to task… all neatly wrapped up in 22 pages. No issue better illustrates Amanda Waller’s verve as a leader, the Squad’s rag tag group dynamics, and the visual cool of their Belle Reve headquarters. 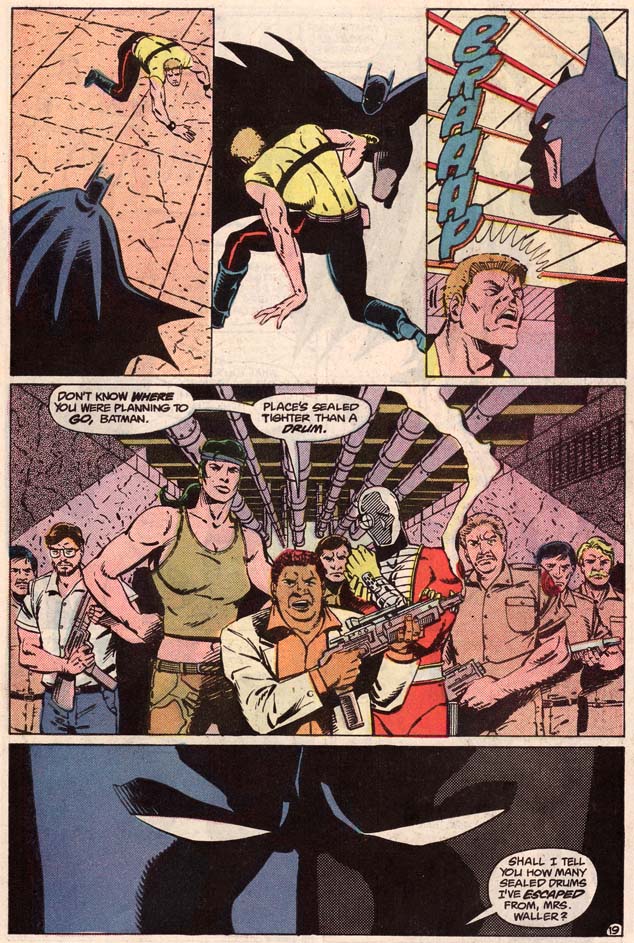 Oh, man, look at that last panel… arghk!… classic McDonnell. Anyway, I couldn’t articulate all that as a 9 year old, but I had to channel my excitement somehow back then. I took the weird relationship that Batman seemed to have with the Squad and made up my own ending to “Up Against The Wall”. In my version, Batman still gets away but has at least a few cuts and bruises. 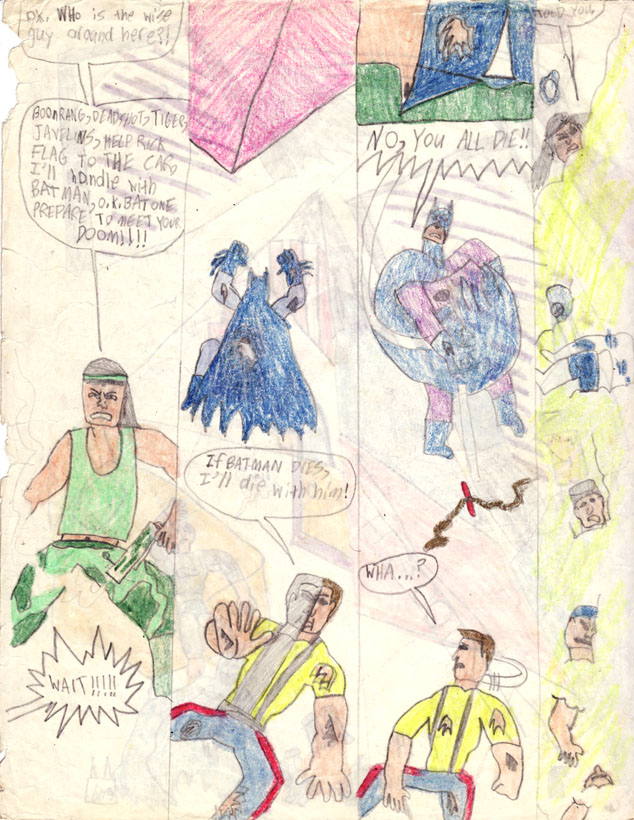 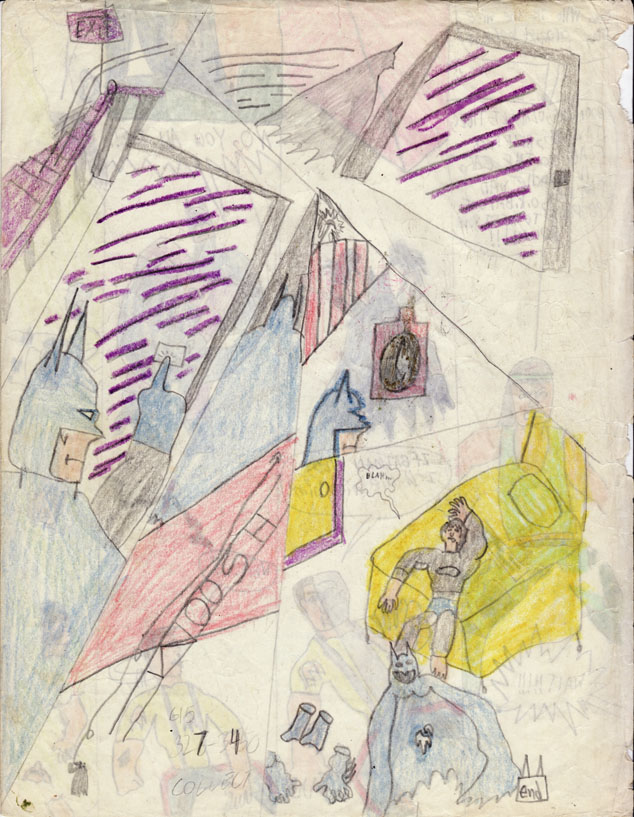 Shown: stairs, rooftop, Batarang, home, bed, in that order. Shortly thereafter, I made another comic that featured an exhausted, pummeled Batman, this time against Shade the Changing Man (another Squad member). Shade, who is usually a good guy in the regular comics, stands as a redesigned, demonic villain under my direction. Shade’s mission was to take Batman and his Justice League teammates into a hellish dimension in order to torture them… slowly! 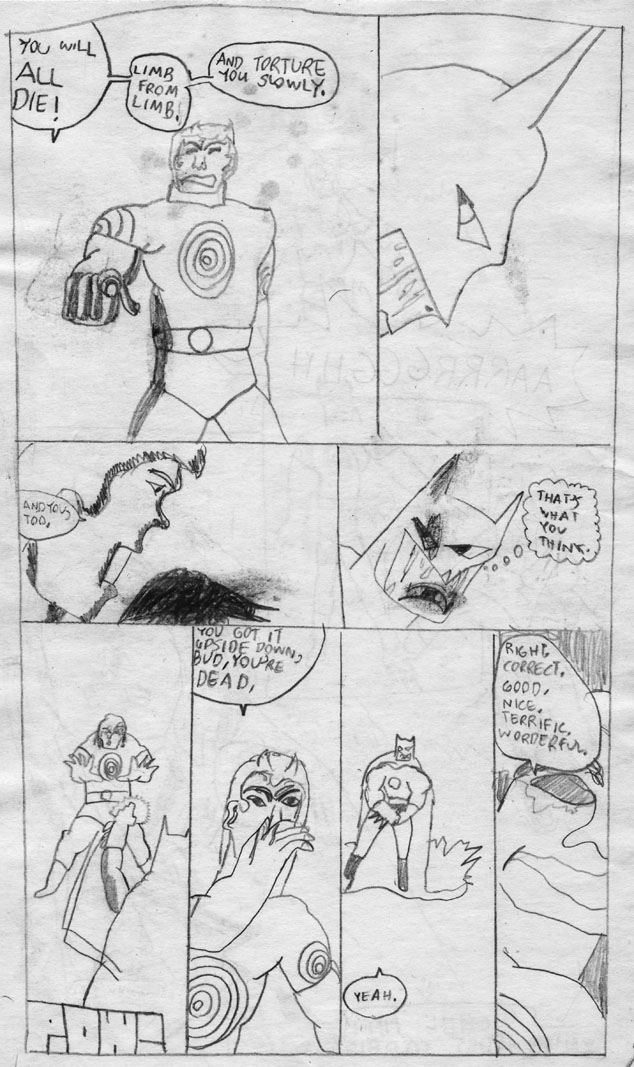 What you’ve witnessed here is the classic example of a cartoonist’s typical pattern: falling in love with this stuff at an early age, wanting to replicate that thrill, and then stubbornly trying to follow through on that desire as best one can. That’s the spirit of the industry right there.

That’s how I’ve ended up with DEATHZONE! A sixteen page, full color comic that’s been over 20 years in the making.

Here’s the line up… 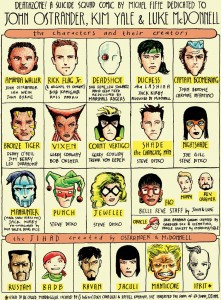 … and here are some preview pages… 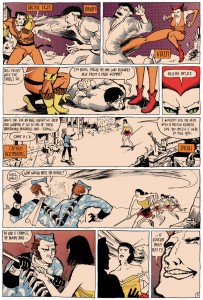 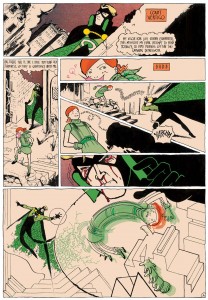 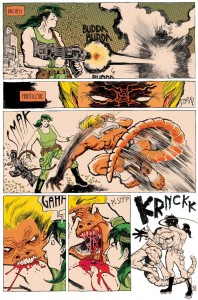 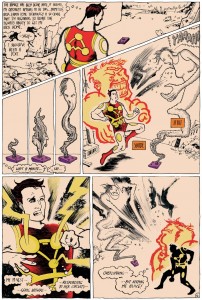 As if that wasn’t enough, Tucker Stone came through with a treatise on the last super hero comic that mattered, an essay which could only be titled:

So don’t delay any longer… get it now!

Finally, here’s the last page of my Shade vs Batman story. 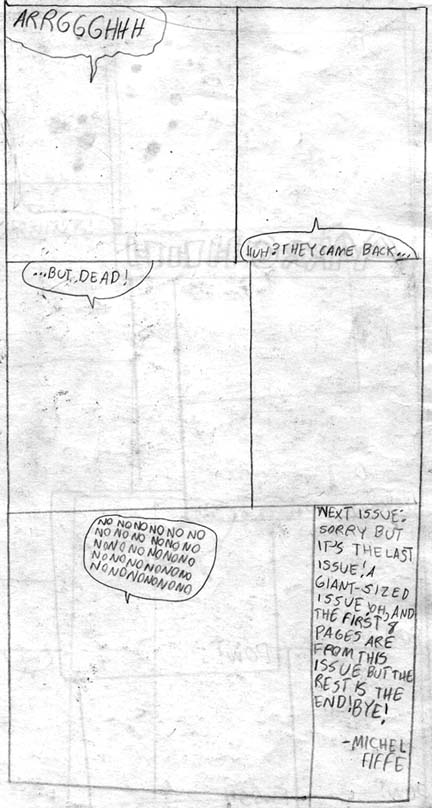 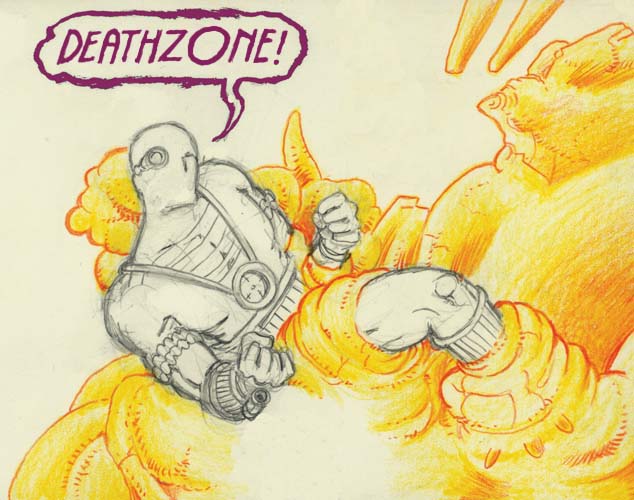 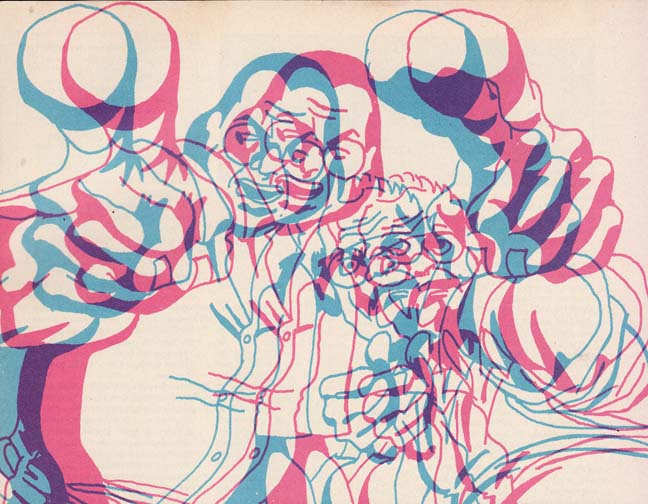 I interviewed writer John Ostrander for a piece on the dark humor anthology comic, Wasteland, over at The Factual Opinion. In the article, Ostrander talks about his involvement in the title, as well as his working relationship with Wasteland co-writer, the late Del Close. It’s  a comic series I always return to, as it features the work of some of my favorite creators, but the most recent — and most important — detail I’ve discovered was how deeply connected Wasteland is to the art of Improv. That would make perfect sense to anyone familiar with the work of Del Close, but Ostrander shed some light on just how defined that writing dynamic was. Read the interview, then find out for yourselves how great these comics really are. 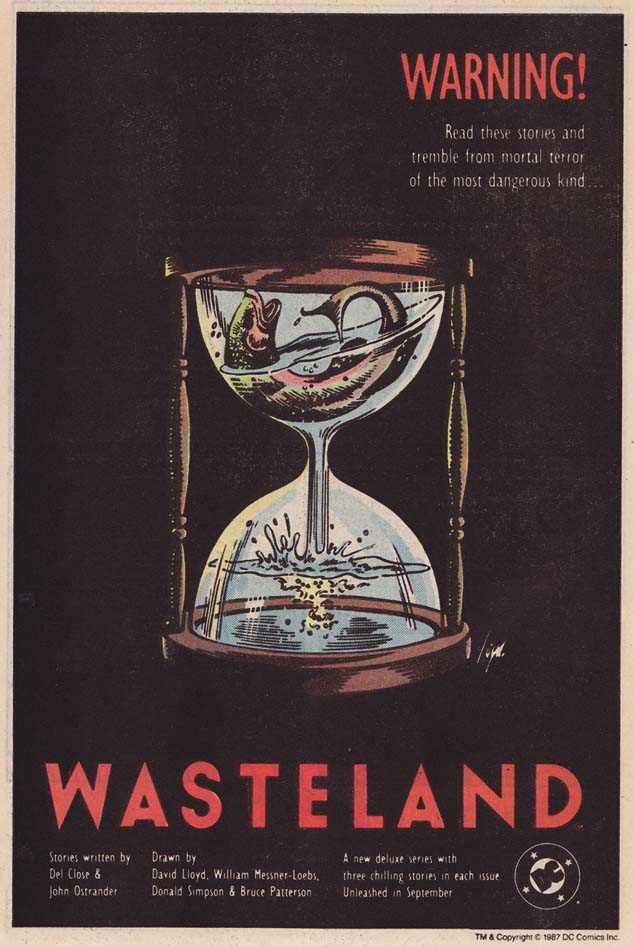 The Comics Reporter recently asked its readers to throw in some suggestions for the Five For Friday feature. One of my original proposals was that we list four of our childhood favorites that stood the test of time and one that did not. Not all of us read comics as children, though, and how amusing could our youthful tastes really be? CR modified the request accordingly, and the results came in. Go, Read: You Look Different Now. I’d like to now take this opportunity to give you a run down of those choices that still do it for me:

First off, how are you not going to pick up a comic with a cover like this? 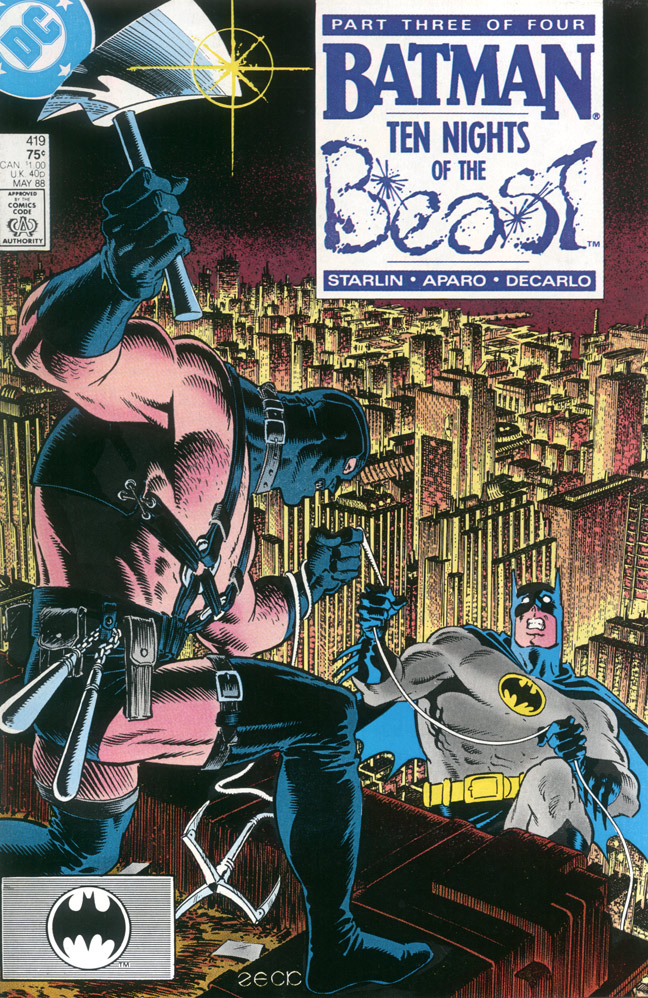