I recently got the chance to collaborate with one of my childhood comics heroes, Mike Allred, creator of Madman. I did a pencil drawing, Mike inked it and his wife Laura colored it! As if that wasn’t cool enough, the piece was slated to go into the Madman 20th Anniversary Monster (in stores mid-December).

The pin up was to depict a large cast of creator owned characters, all in celebration of the medium’s independent spirit. The idea originally sprung from Allred and Dean Haspiel (who vouched for me and my love of drawing crowd scenes). The piece would have an accompanying essay written by Adam McGovern, so all four of us began thinking up a master list of potential characters to feature. It started at 20 or so, then easily over 40. I held off on drawing anything until a definitive list was hammered out.

First, though, a rough sketch to give me an idea… 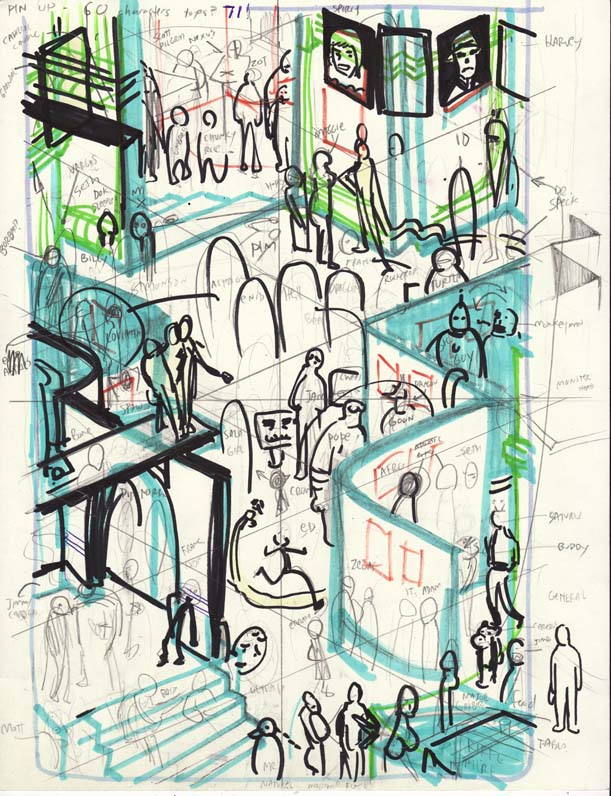 I had started with the basic information: a big ass party. It wasn’t to be a group action shot, but a bunch of folks hanging out instead. I made sure to draw the room in proportion to the space needed for the growing list of characters (70 at that point). I wanted to channel Yves Chaland in a way, but my main source of inspiration was Joost Swarte… 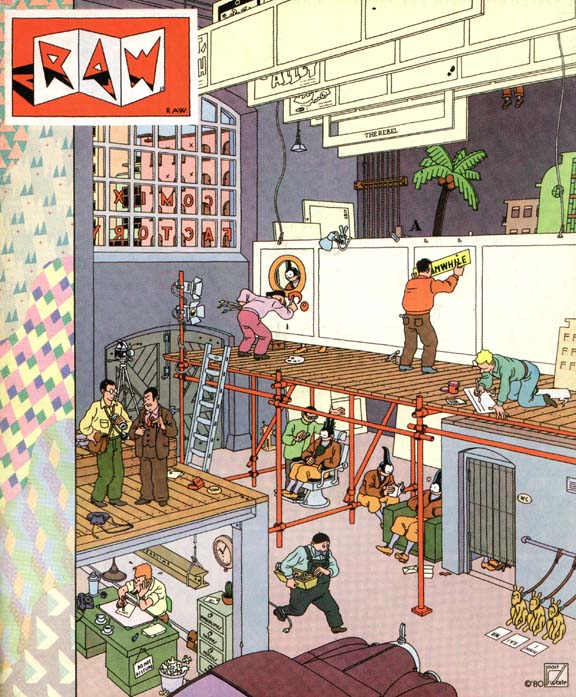 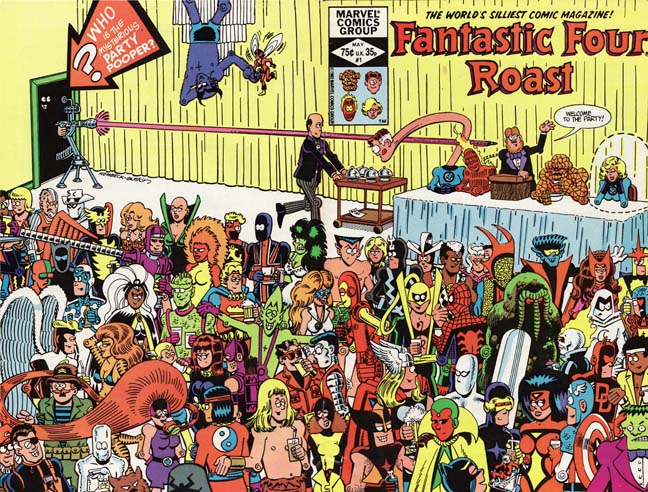 The ultimate list of characters still had to be finalized. Between the four of us, a lot of characters were added, cut, suggested, added again, and dug up until that master list was actually completed. It ended up being a head count of over a hundred. All I had to do was make them coexist on a single page.

I wanted to convey every character’s personality at least in the smallest way. I had to reduce each one to a single, tiny movement. A bunch of little stories going on at once. I penciled as cleanly as possible and sent it off to Mike and Laura to complete it.

I still couldn’t believe Mike Allred was gonna ink this.

Working with Mike is a big deal to me.

I was really into Madman Comics back in the day, so I was naturally interested in the debut of its sister title, the Atomics. This was back in 2000. I liked the characters, the stories, and especially Mike’s positive attitude in making comics fun. He started his own company (AAA Pop Comics) and delivered a fun comic month in, month out. It was inspirational.

So much so that I was inspired to actually draw the Atomics. I had only drawn other people’s characters for company submissions, but this was different. I just wanted to draw something for the hell of it. So I did. I photocopied the drawing and mailed it to AAA Pop.

I didn’t give it much thought. I figured Mike might dig it and that was that. A few months later at the local comic book store, I was flipping through the latest issue of the Atomics and discovered that my fan art had been printed in the letters page! 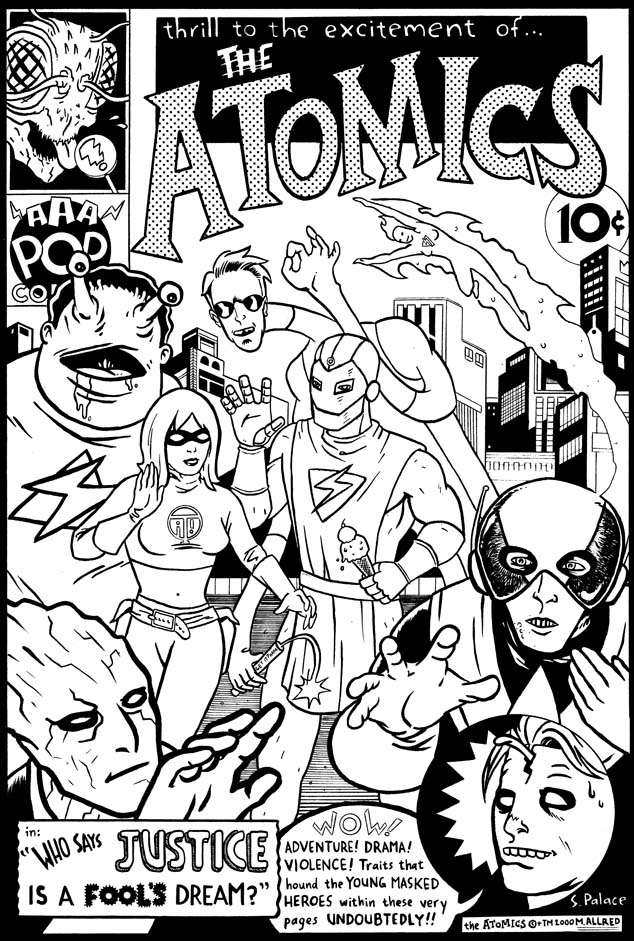 Just like that, I was in print! For the first time! I received a very cool postcard from Mike himself months later. He was very supportive.

Skip to a year or so later. Remember when Mike teamed up with Peter Milligan to re-imagine Marvel’s X-Force franchise (later as X-Statix)? I was a total fanboy for this when it first hit, to the point where I even entered a contest – contest! – that involved drawing your own character. Readers were asked to create a mutant superhero for possible X-Force membership. What, you think I cared about creator ownership and licensing? Nah… I wasn’t submitting my life’s work, but just a goofy concept for the sake of involvement with a title I liked a whole bunch. All I wanted was Mike Allred to draw the mutant I created.

I called him Bastador, a teen Mexican wrestler who had a powerful living baby inside of him, constantly struggling to escape his masked mortal coil. Or something like that. 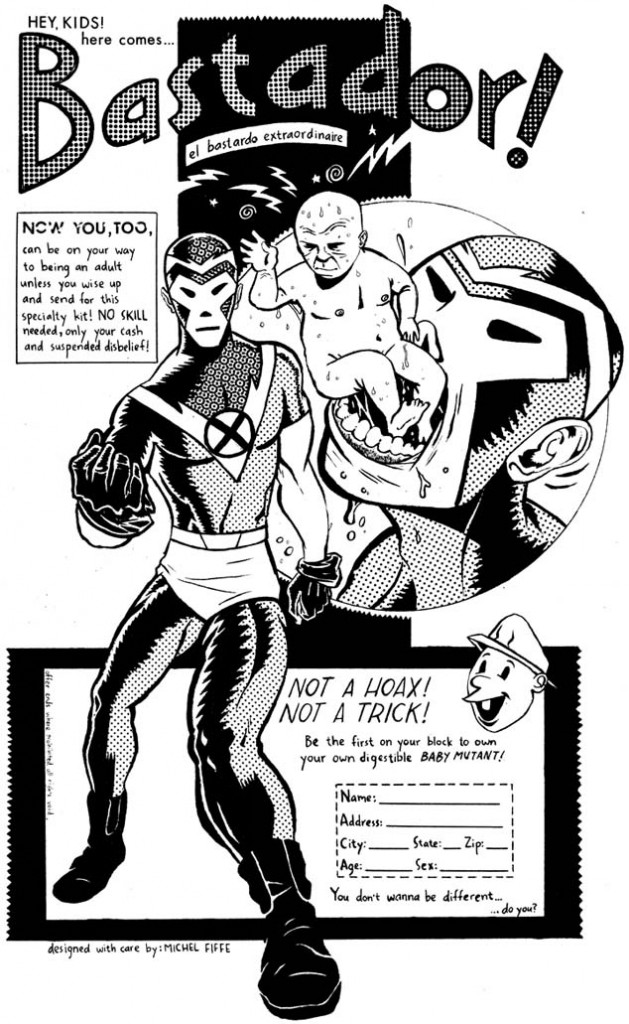 No, it didn’t win, thank you very much. I don’t even remember who did.

Anyway, back to the issue at hand.

Imagine my surprise when this came in. 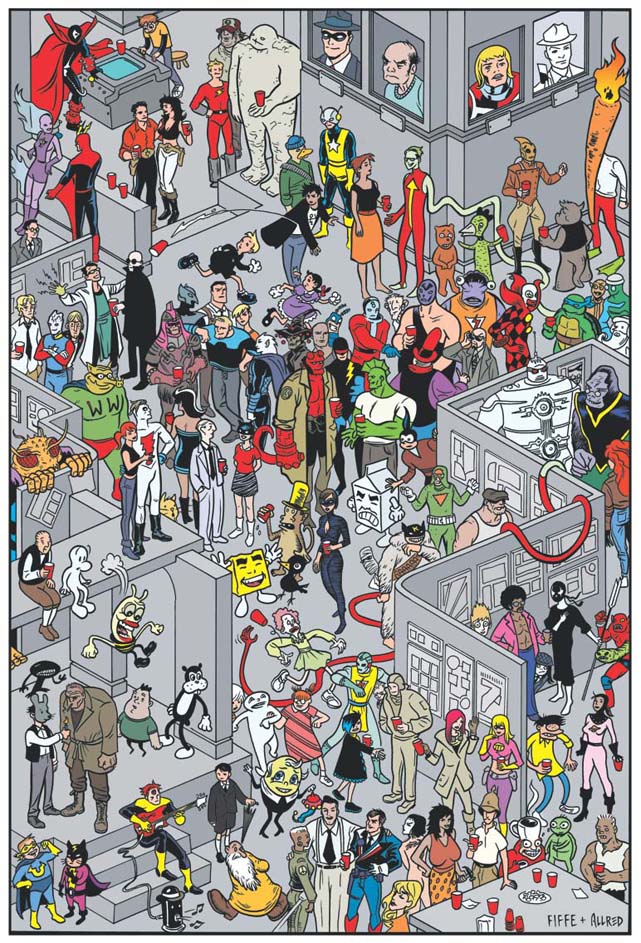 I was floored when I saw it. Leave it to Mike to take my cluttered mess and make it sing. He even added a few heads here and there. Given the sheer amount of creator owned characters, this single snapshot feels like we barely touched the tip of the iceberg. There are so many other great characters that weren’t squeezed in that I’m compelled to draw the other half of the room. Hmmm…

Thanks to Laura, Dean and Adam for being a part of this. Big thanks to Michael Dalton Allred for making it all happen and for being there with words of encouragement from the get go.

That’s my contribution to this awesome project. Be sure to get the Madman 20th Anniversary Monster this December 14th (some sources say the 21st). Don’t take my word for it; look at that roster. It’s got all of my favorite cartoonists and yours. Support your local comic shop while you’re at it, and have a happy holiday!