ZEGAS is back in print and available again! This is the title that started my self-publishing operation, Copra Press, and set the path for subsequent projects (Deathzone! & Copra). I’m still very proud of these comics and I couldn’t let them remain out of print much longer. 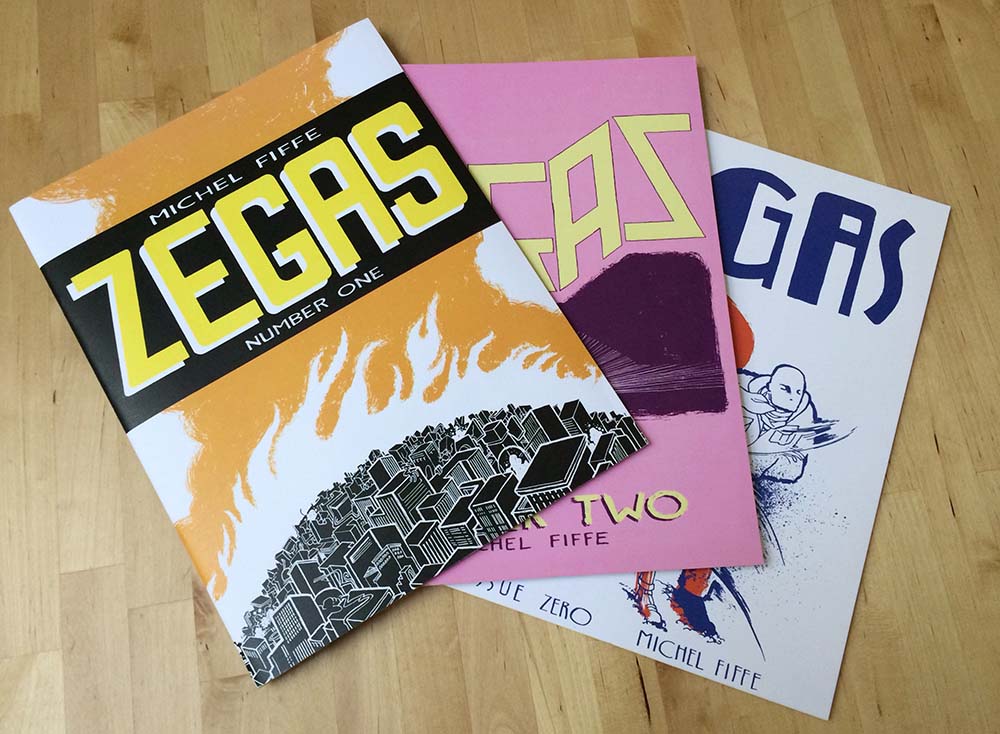 If you’ve never read ZEGAS before, here’s your chance to catch up on all three issues: the ZEGAS PACK. If you’ve managed to get an issue here or an issue there, you can also pick and choose which one you need individually: Issues ONE, TWO, or ZERO! 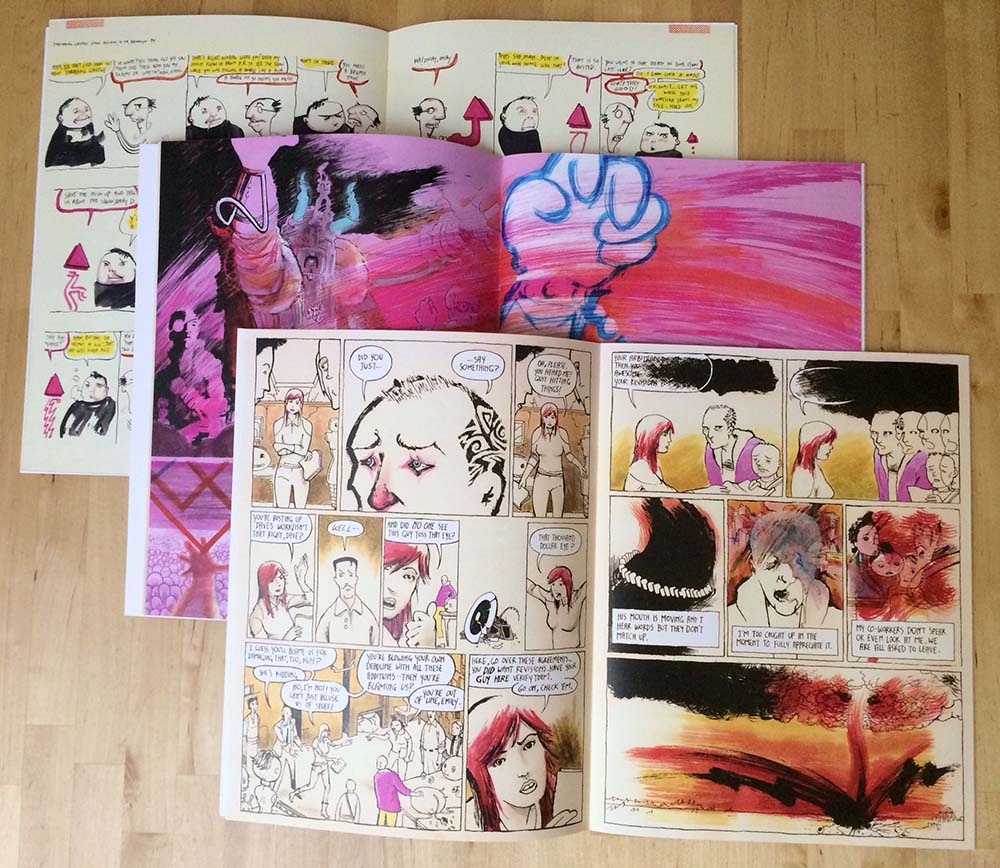 The print run is still super limited, so get them now while they last!

EXTRA: My contribution to Zainab Akhtar’s Comics Shelfie is up, over at her Comics & Cola blog. 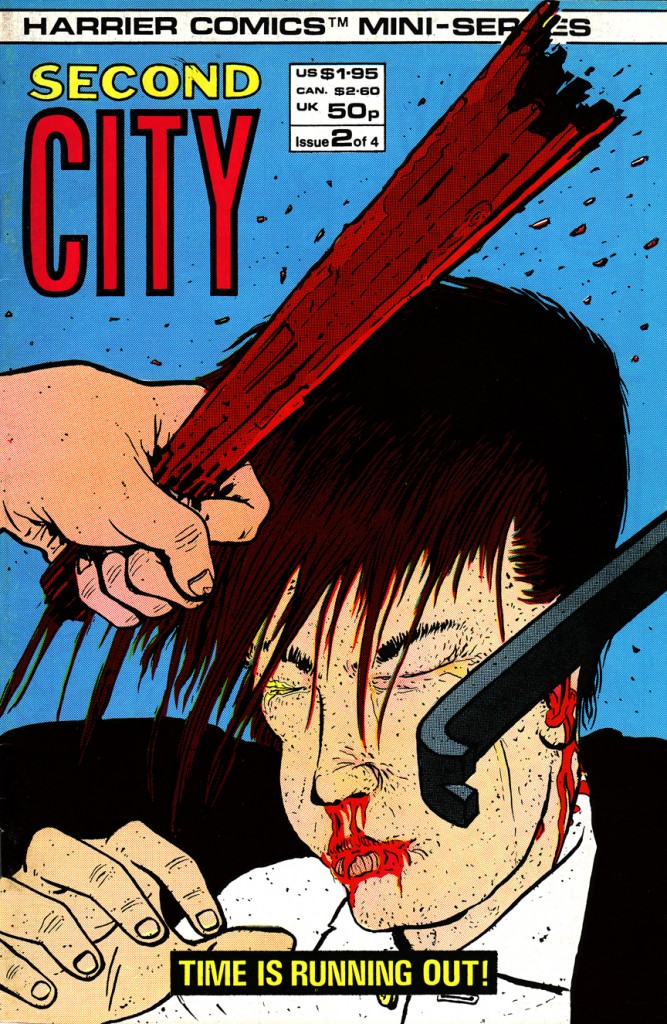 I had the pleasure of interviewing Paul Duncan and Phil Elliott, the creative team behind Second City, over at The Factual Opinion. They’re responsible for creating one of my recent favorite comics (back in ’86) for UK’s Harrier Comics. In the interview, they talk about their collaborative steps, thematic nuances, and the things that influenced this underrated, brilliant mini series. 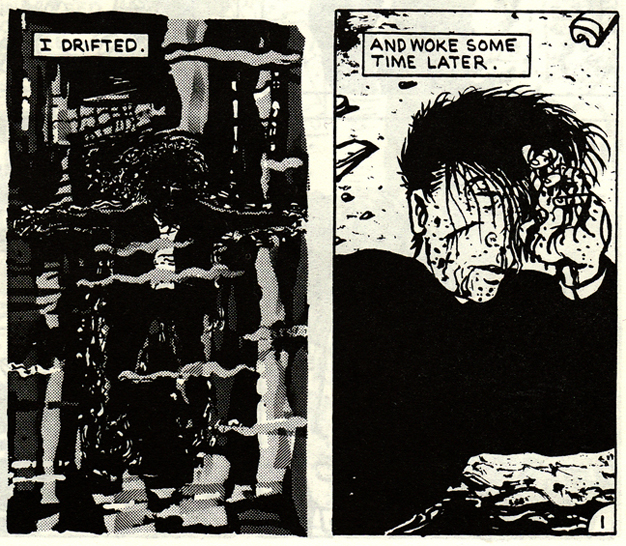 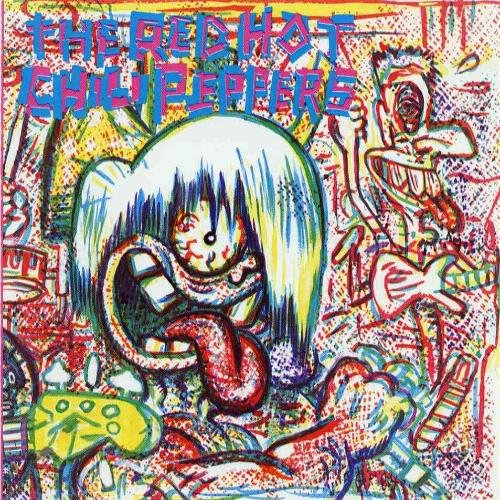 Long ago, there came the day when I stopped collecting comic books and started getting into music and girls. It’s a typical story that most boys go through, but it wasn’t that clean cut for me. Comic book reading was a difficult habit to break, and I wasn’t really getting into music anyway. A few friends of mine were eager for me to join them in whatever role they were adapting for themselves: “C’mon, are you a rocker or a hip-hopper?” However, When I first heard the Red Hot Chili Peppers’ “Mother’s Milk” album through a friend, the decision was made for me: I just liked them and that was it. I was hooked. 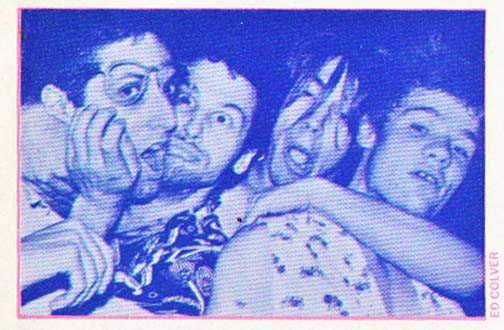 I recorded my friend’s “Mother’s Milk” CD onto a tape and played it over and over, day after day. The music sounded like nothing I had ever heard before and I immediately fell in love with those weird, infectious sounds. The band members were all these crazy looking, uninhibited beams of energy and sex and fun. I was 13 and these bare chested goofballs were my idols. I never owned any music prior to that ratty cassette, but that musical discovery led to an obsession. I eventually hunted their older albums down and absorbed them the way I did my already worn out tape. I was especially drawn to the the cover art to their self titled debut which was created by Gary Panter. I hadn’t drawn a single comic book image in months, but I suddenly found myself doodling his Chili Peppers characters all over my school books.

Never hesitant to seek and nerd out over the details of something like this, I asked Gary to shed some light on how he ended up working on that cover. He was kind and generous enough to divulge the details of his involvement:

“Eric Greenspan, who I had met when he bought a painting of mine from a show at Steve Samiof’s (editor of SLASH) SHOFA, on Larchmont Avenue in LA, was really into reggae music and rock. He managed Steel Pulse and later Ice-T and he was always avidly looking for new stuff. He kept telling me about a new band that performed naked and were great. I had heard of them and seen Flea at the premiere of Penelope Spheeris’ Suburbia. He started working with them and finally I went with Eric to see them and they were really great. They lived in my neighborhood and I saw them around at punk shows and stuff and on the street stopping traffic by walking into it. Not a great idea unless you really don’t care. They knew my work from SLASH; I knew the art director, Henry Marquez, socially, as I was schlepping my portfolio around and meeting people, and Eric was another connection. Can’t remember if Henry was art director for both records.”

My teenage brain couldn’t even register how this cover was made, let alone thought up, and even when Gary explains it… it still can’t.

“I made it kind of like the paintings I was doing then, which was a series of thinned acrylic paintings on heavy paper that suggested bad print jobs I saw on the border of Mexico when I was a kid. And bad American print jobs, like the printing on Popcycle wrappers. I went to a rehearsal, which was terrific, and drew them and tried to figure out cartoonish versions of them that alluded to Weirdo plastic kits by Roth and Mouse which to me were powerful styles. Being the only audience for a Chili Pepper rehearsal was swell, especially because they tried stuff in rehearsal that they would never do on stage (which was true of other bands I watched and drew in rehearsal, like the Weirdos and the Screamers), like playing stuff too fast or too slow and doing inside joke chants and stuff.” 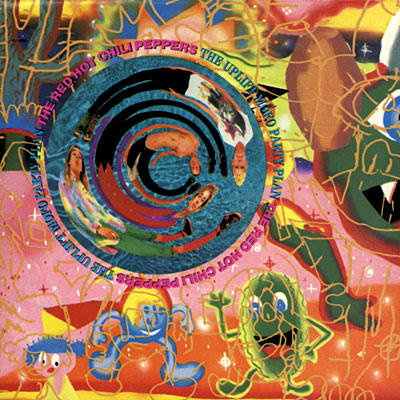 Gary also did the cover art for their third album “Uplift Mofo Party Plan” (above) which quickly became my favorite Chili Peppers album upon listening to it. The cover art (mostly covered up by a big picture of the band) is totally different from the first one yet still captures the spirit of the band. Was it mere coincidence that their sensibilities meshed so well?

“I knew them a little better then and they told me things that they wanted on the cover, which were images from songs and also the big car that they had pimped out with fake fur, toys, flashing lights, etc. They took me out to the car on the lot of the record company and I made some notes and sketches. They were a big band by then, so I asked to do a gold foil or gold ink overlay of lines, which I drew separately from the painting. Bigger bands got bigger printing budgets.”

I recently came across a photo of the original album art for “Uplift…”, a 50-inch wide psychedelic gouache drawing on paper. Apparently there was a note on the bottom of the art board: Please Return Art to Gary Panter. It was auctioned off at Christie’s (est. $10,000 – $15,000) a couple of years ago. 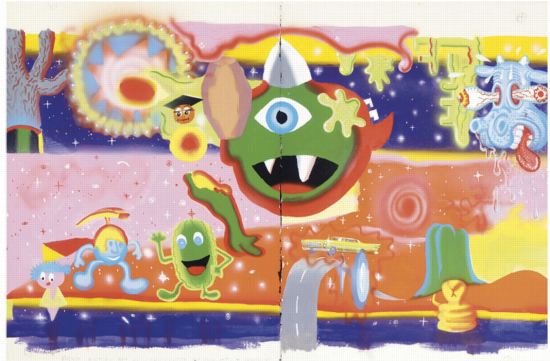 “Well. I don’t remember if I gave it away, sold it, or left it so long in a friends garage that she finally had a garage sale. I did not get anything from that resale. The money part of art is generally an illusion. The making of the art and the meeting of people and seeing it float around the world are the neat part.”

The Red Hot Chili Peppers have been a huge institution in rock music for many years now, something far removed from their vibrantly rough identity of the 80s. I’m too emotionally invested in that material to hear them as anything but the greatest music ever; those early records still give me a thrill after all this time. I always found it funny that Gary Panter, an icon who I later discovered to be a critical figure in cartooning, was the artist who visually shaped the Chili Peppers in my mind’s eye during my no-comics-allowed days. These covers are mere pebbles in his expansive body of work, but they’ll always be prime examples of what the world first offered me outside of comics. 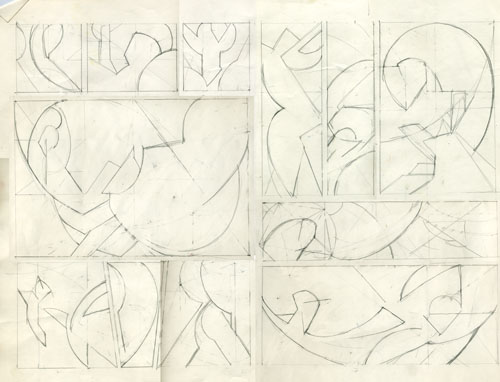 I’m proud to announce that the interview I conducted with cartoonist Mark Badger is now complete and “live”. The Beat posted the piece in 3 parts. Just clink on the links below:

If you can’t get enough of his comics or need a little warm-up before diving head-first into the interview, check out the supplementary, art filled post I put together! 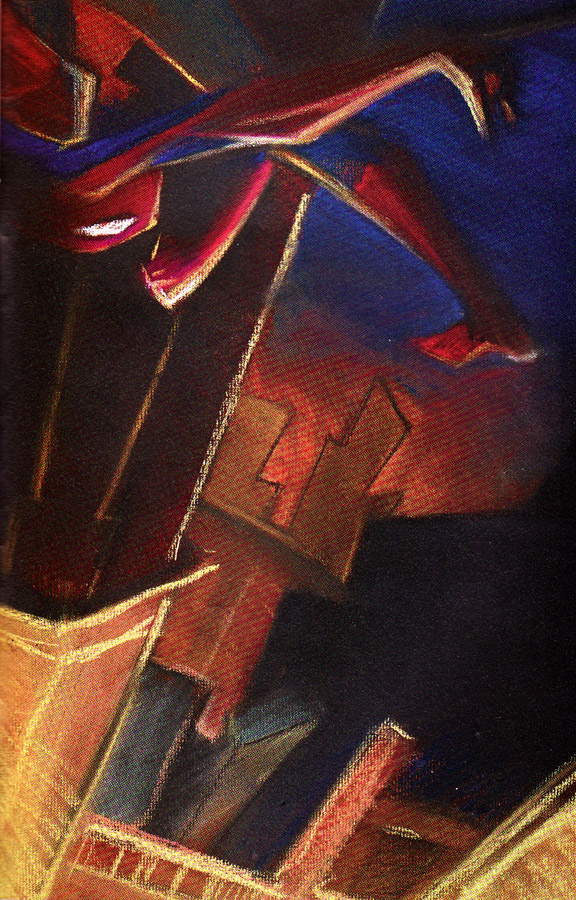