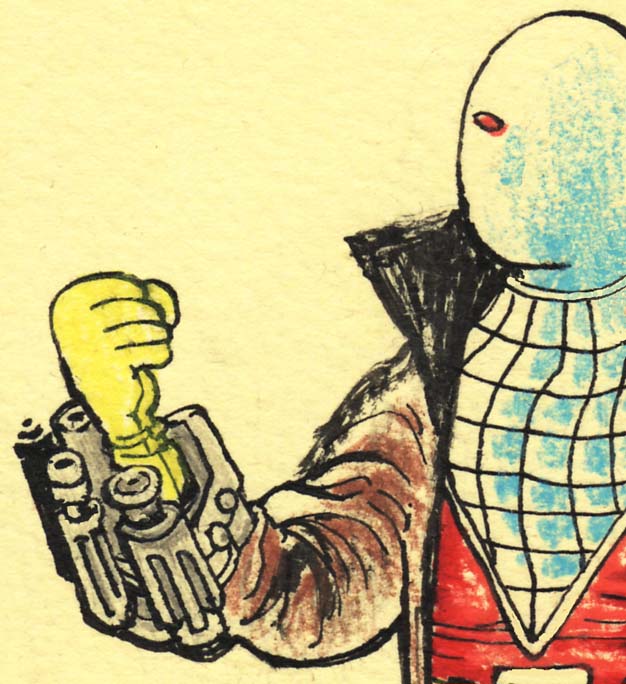 I brought forth my Deathzone! comic a few weeks ago, and the world responded:

First off, big thanks to Tucker Stone and his Factual Opinion for contributing to the actual comic in question, and for discussing it some on his Comics Are Burning In Hell (Episode 0.3) podcast, co-hosted with greats Joe McCulloch and Matt Seneca, entrusted comix allies all.

Another podcast that favorably mentioned us was War Rocket Ajax (Episode #115), hosted by Chris Sims and Matt Wilson. Chris, a huge fan of the Squad himself, also wrote a piece on Deathzone! over at Comics Alliance before seeing the final product, so I’m really glad he liked it. Oh, and the Mindless Ones had some really nice things to say about it upon my revealing the comic [and after receiving it as well!]; they always come through with support.

Reviews, too! The first one came in straight from Siskoid’s Blog of Geekery, a blog which has extensively covered the Squad throughout its exhaustive blogging schedule. I appreciate It’s a Dan’s World and Nowhere / No Formats for taking note of the comic, too. Further thanks to Comics Reporter and Spandexless for mentioning Deathzone! And big thanks to Zack Soto for dropping the name and the love all over the webs. A special shout out goes to Annie Koyama, who has helped and supported me in more ways than I can ever repay.

And of course, thank you ALL for checking out, inquiring about, and referencing Deathzone! … and for buying its accompanying print.

Having this comic out there has also connected me with other Suicide Squad fans, such as Brannon Costello, who remarked on John Ostrander’s work over at Pretty Fakes, as well as blogs such as Subject: The Suicide Squad (Task Force X) and Omega Agent 1’s Bronze Tiger.

In other news, I will be at Heroes Con in Charlotte, North Carolina this June 22-24!

I’m quite excited to be able to exhibit at Heroes Con; I’ve been wanting to simply attend for years. This will be a fun show, so drop by Indie Island and say hi!