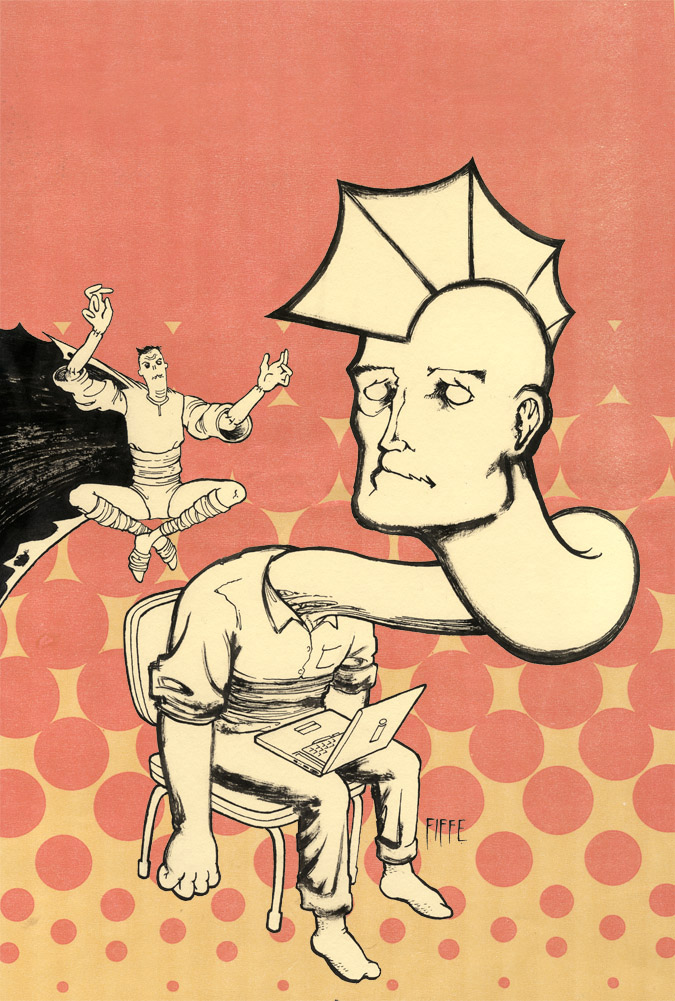 This “Twisted Savage Dragon Funnies” post compiles every contributor to this fine back-up feature and includes every interview, profile and bit of information that has anything to do with this project.

Before we start listing creators, I just want to point out that we do indeed have a TSDF Facebook Group and another fine collection of friends over at the Savage Dragon Message Board.

The folks at Comics Alliance were cool to give us our first official mention and iFanboy wasn’t far behind. We’ve had a couple of substantial interviews as well, one over at Comic Book Resources with Josh Wigler and another at Newsarama with Chris Arrant. The Daily Crosshatch, I should mention, was kind enough to open its gates to me for an interview. But enough press… on to the comics!

The first installment of TSDF can be found in the (flipped) pages of Savage Dragon #160 (cover above). It begins where it ends: Erik Larsen’s “Dragon War” storyline came to a violent end as TSDF made its grand debut. Here are the rest of the contributors… 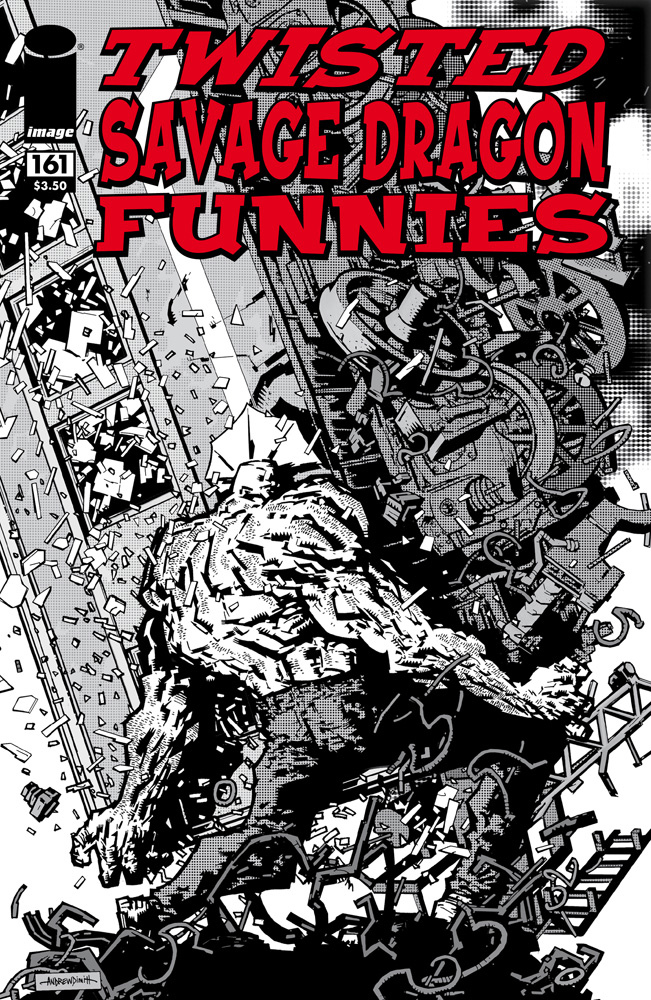 Andrew Dimitt is a fellow Act-i-vator and the writer/artist of the serialized webcomic Drockleberry and Flowing Wells. Check out his online portfolio to see some more of his incredible art. And just to make the rest of us look bad, Andrew warmed up by putting this little pin up together: 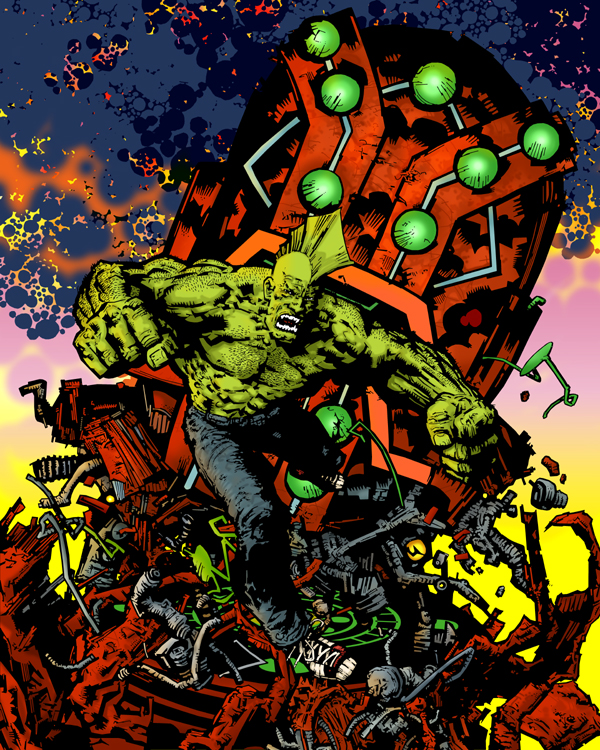 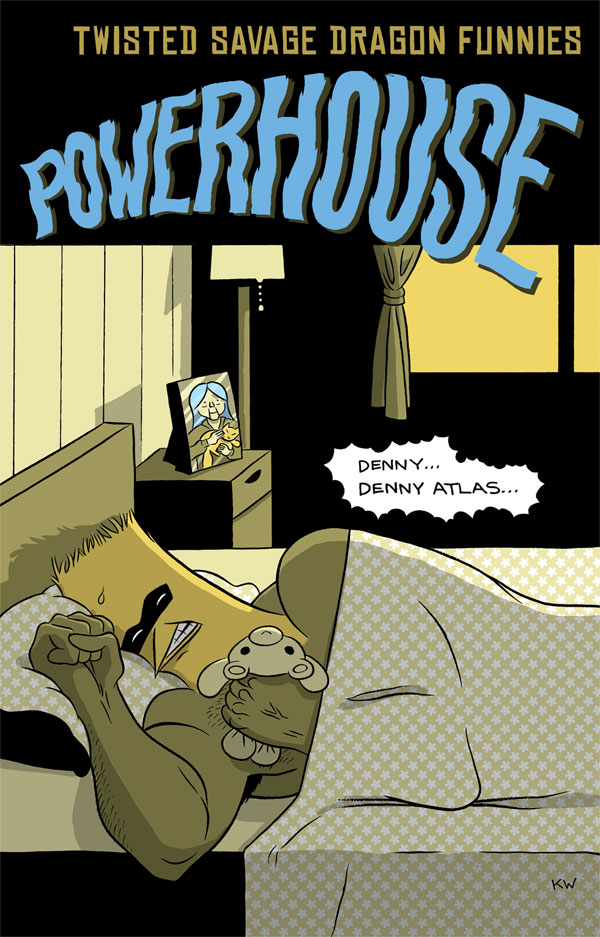 Follow Kiel West’s art and comics through his DeviantArt or his LiveJournal profiles. He’s a great talent working on more funnybook projects as we speak. He also has this cool (but too short) interview over at STYLUS. 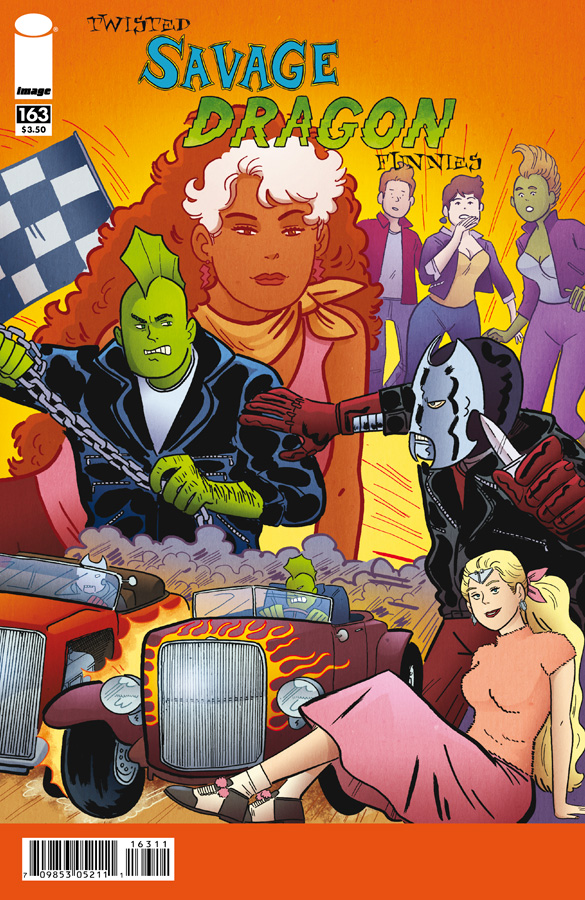 Vito, who always has a thing or two to say, has written many comics for many publishers, but one of his major collaborations is the great high school drama “FCHS”, drawn by Rachel. Go read it at Comixology… it’s FREE! Rachel Freire, not to be confused with that RF, has worked on a few other stories and mini comics that are available through the artist.

Comics Alliance loves Ulises Farinas so much that they decided to exclusively post his 14 page, “Unofficial Batman” comic (they also link to many more of Ulises’ wonderful work). Ulises can easily claim the King of Bootleg/Fanfic throne, but he’s also created many other characters of his own… most notably “MOTRO” for Act-i-vate. 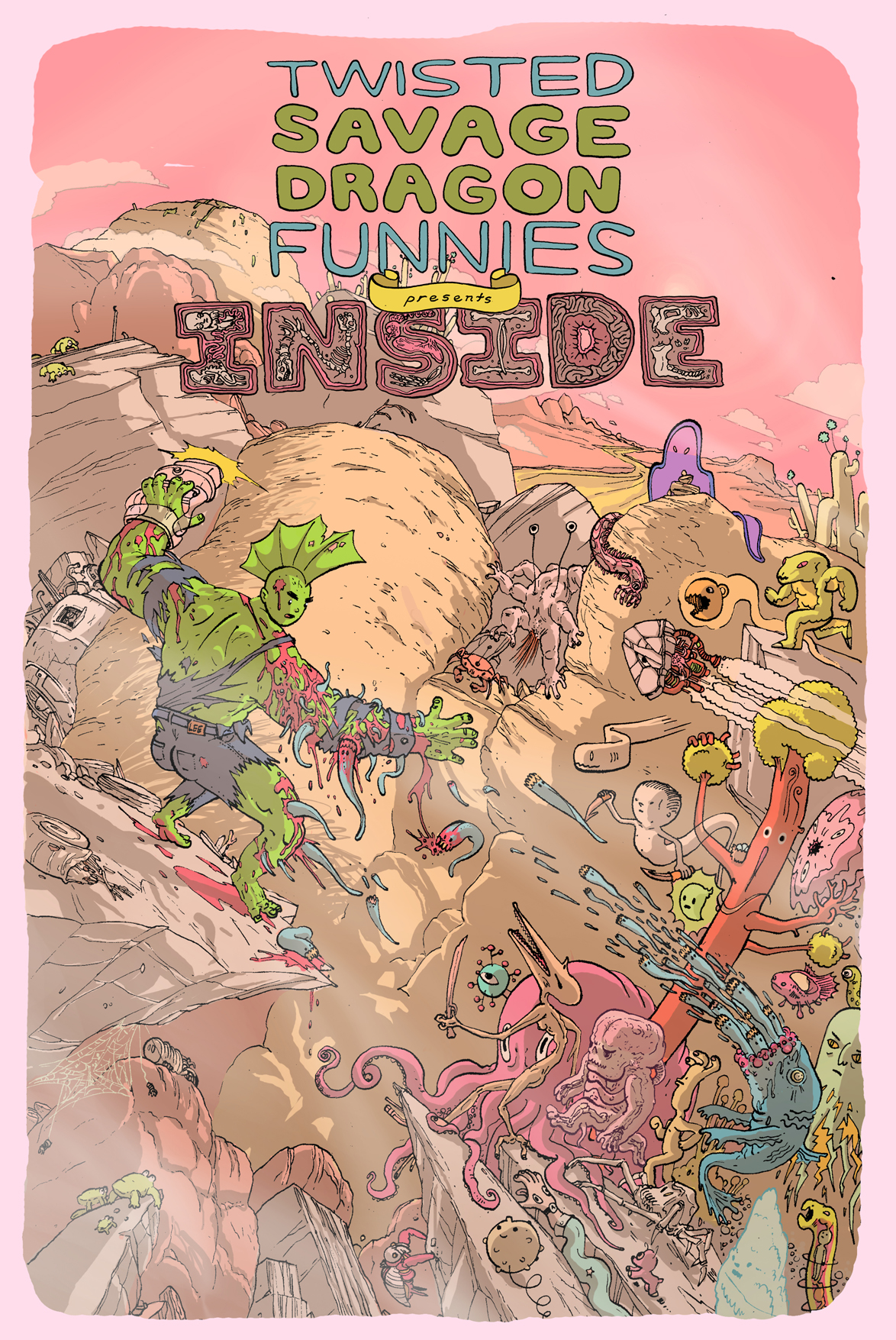 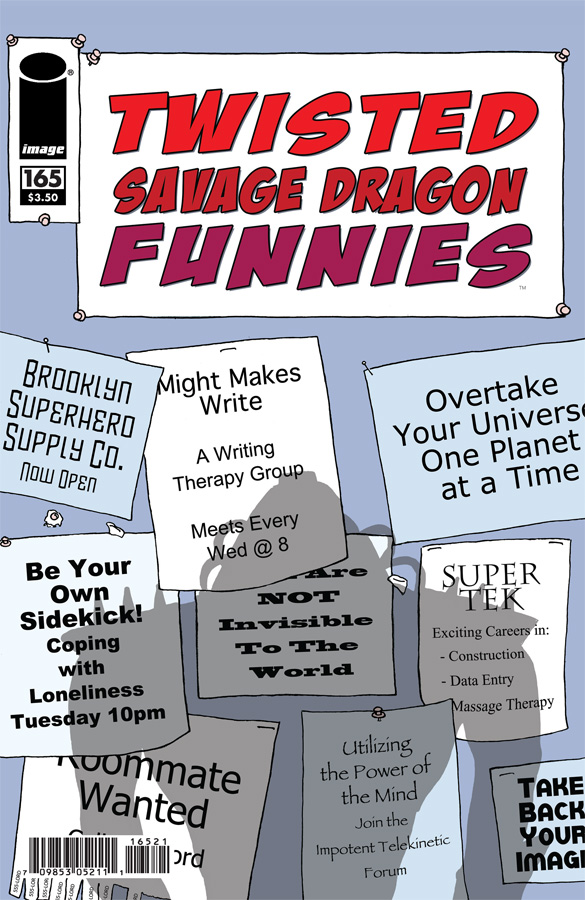 Sinderson’s “Vicious Circle Therapy Group” focuses on the Savage Dragon’s diverse and troubled roster of villains. Chris really outdid himself on this one. He posted a glimpse into his painstaking process as well as his appreciation for Erik Larsen’s wonderful rouge’s gallery over at his site. It’s a must read.

Chris has worked on various animation projects as well as coloring a few other comics projects. Recently, his color sensibility can be found in every issue of Strange Tales (from Marvel Comics) with Nick Bertozzi. Their contributions in that comic are hilarious, and Chris has recently posted a li’l something about his work on the latest issue.

Conor Hugheshas a wide range of illustrations and comics over at his site. While there, make sure to read his comic, Bowl & Opal. Here are a couple of beautiful pages from that story. And prints! He’s got prints! 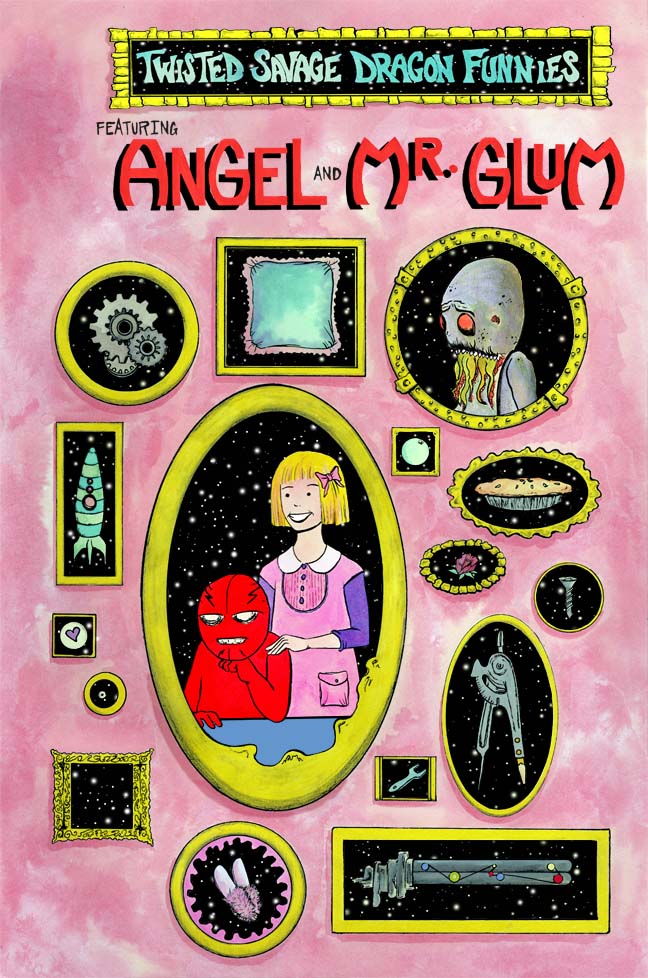 Kat Roberts is the creator of the webcomic FEVER DREAM and a couple of stories for Smith Mag. She was interviewed over at CBR, and she’s always posting a wide variety of terrific art stuff over at her art blog. As for those preliminary sketches: 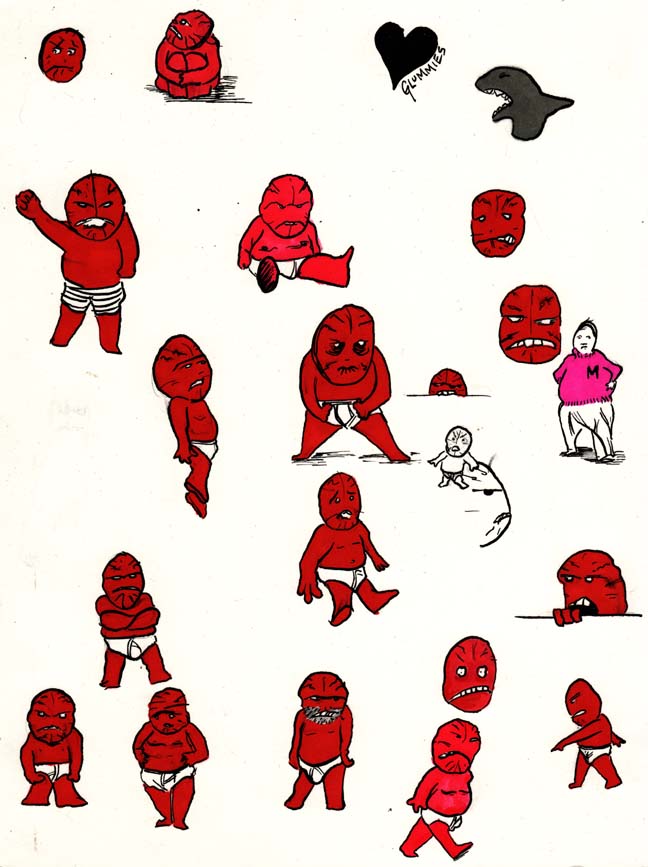 HYEONDO PARK has taken an obscure Savage Dragon villain and made him into the star of his story, which gives dimension to the term “painfully shy”. More of Hyeondo’s fantastic work can be seen at the link above, this site, and of course his webcomic over at ACT-I-VATE, “Sam & Lilah”, which is written by Jim Dougan. All good stuff! 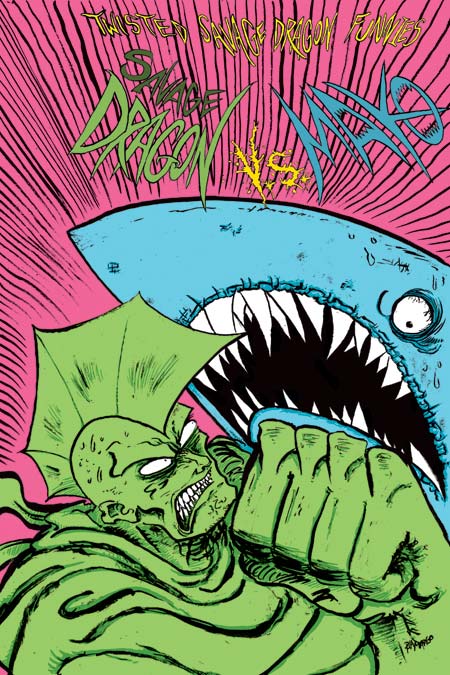 Pedro Camargo’s style and approach is a perfect fit for the world of Savage Dragon: brutal and demented with a good touch of humor helping it along. And if you want more of the same, don’t fail to read his webcomics, GLAM and SPACE SUCKS. They won’t disappoint. After you’ve fallen in love with all of his characters, you’ll want to stalk Pedro himself. Do so through the forum in which he expresses his innermost desires and his deviantART profile. 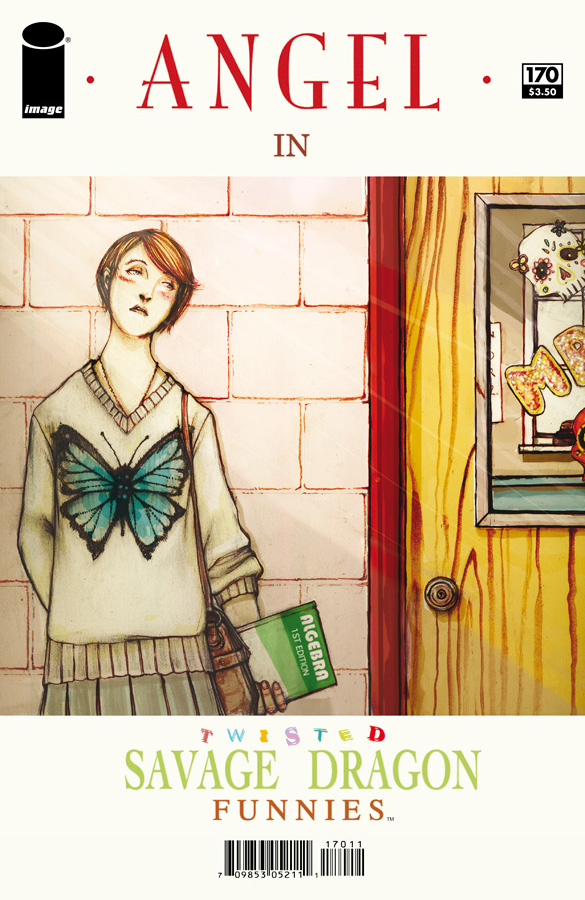 Take a moment to look at some more pretty pictures and some words that make up a thorough breakdown of Thibodeaux’s story.

Joe Keatinge wrote a story that took SEVEN artists to draw! This dimension hopping tale features all sorts of Dragon versions, including the main version drawn by Erik Larsen himself. As you can see from the cover above, the other artists include Simon Fraser, Joe Infurnari, Mike Cavallaro, Tim Hamilton, Dean Haspiel, and George O’Connor.

For the occasion, we made it SAVAGE DRAGON DAY over at Drawbridge. I drew me up some Sgt. Marvel & Dart using a totally new coloring process (for me, anyway), as well as a bunch more contributors.

That wraps up the main round of the Twisted Savage Dragon Funnies feature. Check out the new contributors that will be in the oversized collection coming this mid-July! It’s ALL gonna be collected, so make sure to ask for it at your local comic shop.