I received my first comics when I was a little kid, a 5 year old transplant in Madrid, Spain. My grandma bought a handful of them for me from the newsstand. They were translated Marvel and DC comics, some were black & white, some in color. They were the size of magazines, too. Huge, colorful, sometimes many stories per issue. I was mesmerized, as even the ads for other titles seemed incredibly epic to me. Eduardo Barreto had something to do with all that. 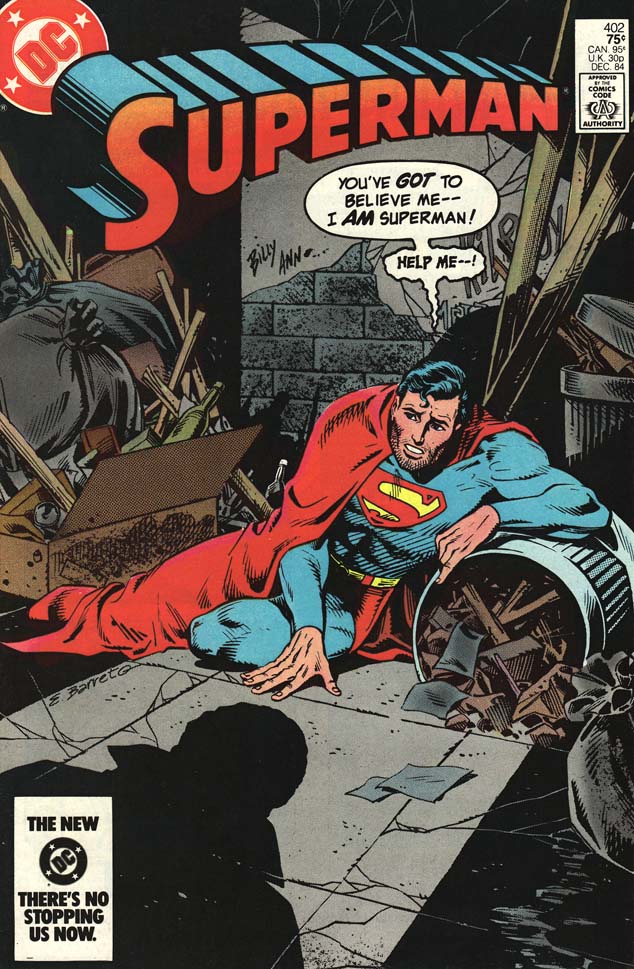 That there is the first Superman comic I ever read. I had seen the 3 movies and had the toys, but a comic? This was it, and seeing Superman cry for help in an alleyway with stubble, of all things, was weird and interesting and compelling. The actual story was a pretty good Bates/Swan/Oksner production, but nothing beat that cover.

Even many years later, when I would first start going to comic book stores once in a while, I would always gravitate toward the Barreto covers in the back issue bins. The ones I thought looked cool were never drawn by him on the inside. Again, nothing beat those covers. 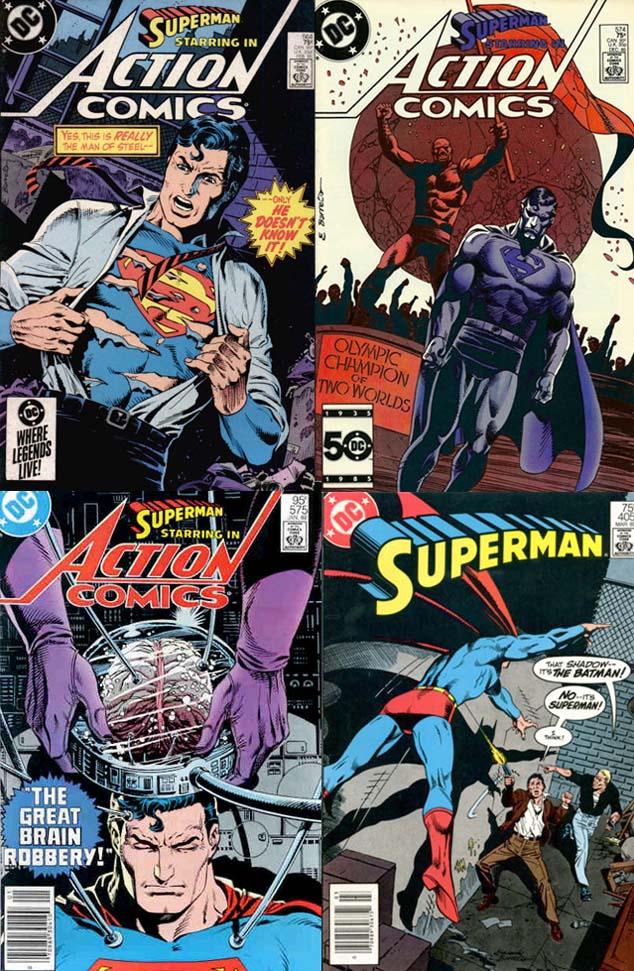 I’m getting ahead of myself. Back in Spain, I did have a comic drawn by Barreto. It wasn’t a popular icon of a comic, but I happened to own it, and it seemed complex to me. It was heavy and tragic and I felt the weight of the conflict in every panel. I had never even seen these characters before.

It was Atari Force issue thirteen. 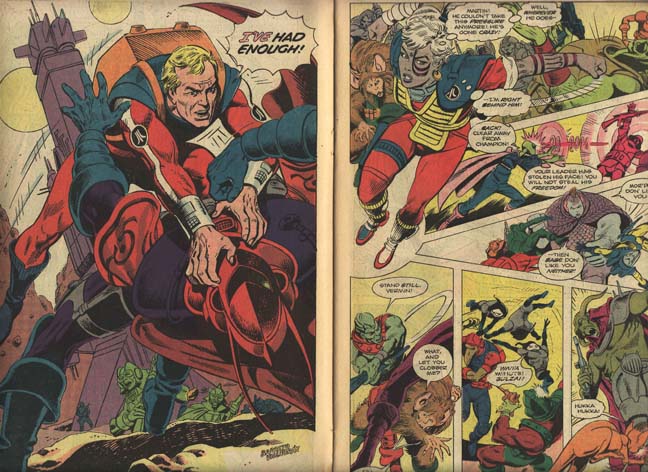 What an odd collection of characters. They all seemed to be friends but enemeies but lovers but related but… but… I loved trying to decipher the story over and over again. Turns out that the issue at hand featured a couple of reveals. People were betrayed, identities explained, the end of the world was inevitable. I loved it. How could I not? Look at this page and its chaotic design, and yet it flows clearly, masterfully.

As for the page below, that was my favorite page out of the entire thing. A pretty simple, brutal fight. The entire issue was a great build up to this moment and this was the perfect release. 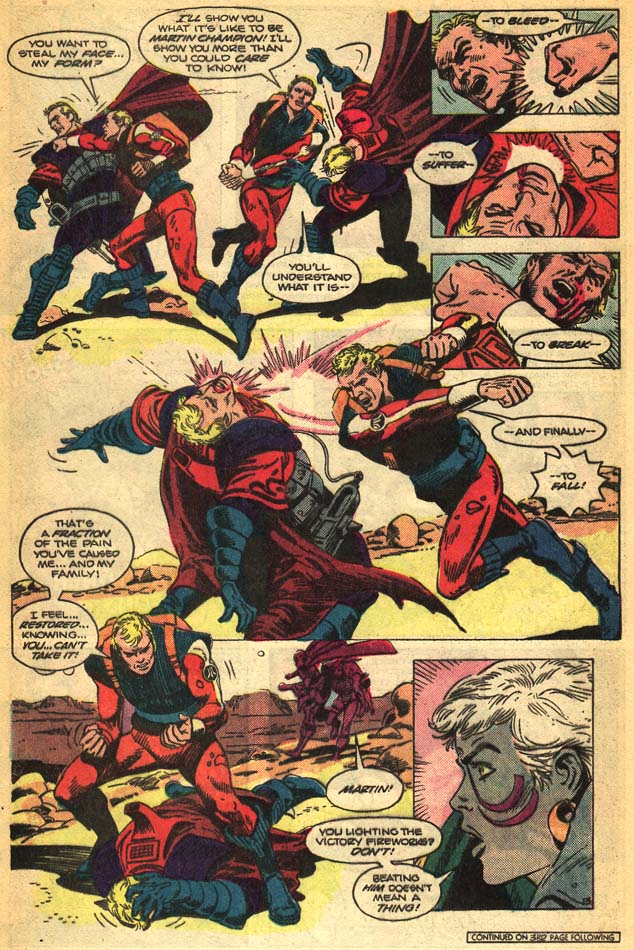 I recall thinking that the guy’s face didn’t have enough blood on it. Those faint pink spots weren’t good enough for me. I needed to see more blood, so I just added more blood with a red pen. I wish I still had those Spanish reprints, if only to see what kind of graffiti or subplots I used to scribble in any open space on the page I saw. 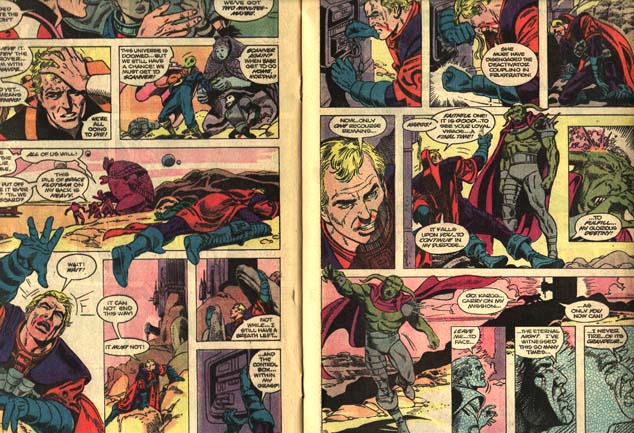 Eduardo Barreto passed away today. He was 57.

Our condolences go out to his family and friends.

Tributes and other remembrances can be found written by Andy Khouri, Heidi MacDonald, and Ty Templeton.

Those Spanish reprints, I’ve only found a couple here and there. I haven’t come across the Atari Force one, but I know that those bloody pages will not need me to scribble on them when I do.

That scene, that comic, Eduardo Barreto’s work, they’re perfect the way they are. 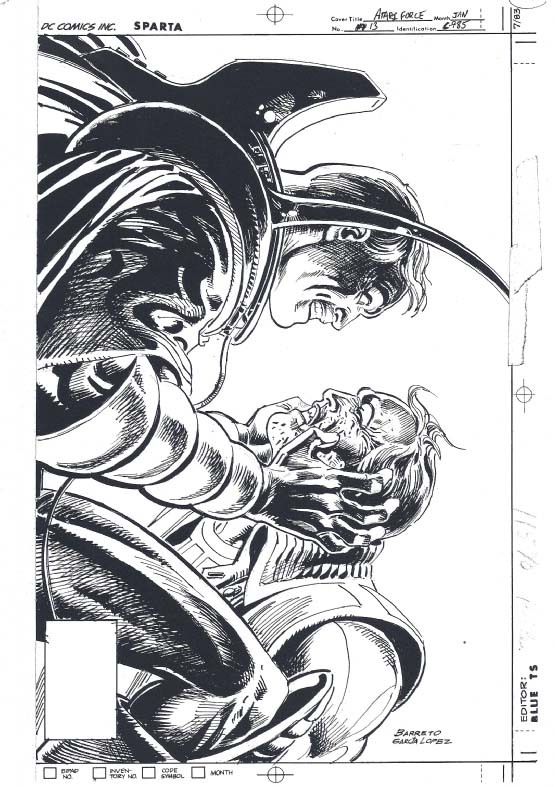 It’s almost like you’re older than me.
I read many of those comics also.

Too young he was.

Barreto was a great artist, even though he didn’t consider himself one. I still have some dear old “El Poderoso Halcon” originals at home…I’ll be posting them soon. He was just great!

Barreto was awesome. I was lucky enough to meet him, interview him a couple of times, and get some originals drawings for him. He will be missed.

I would love to read those interviews! In print or online only?