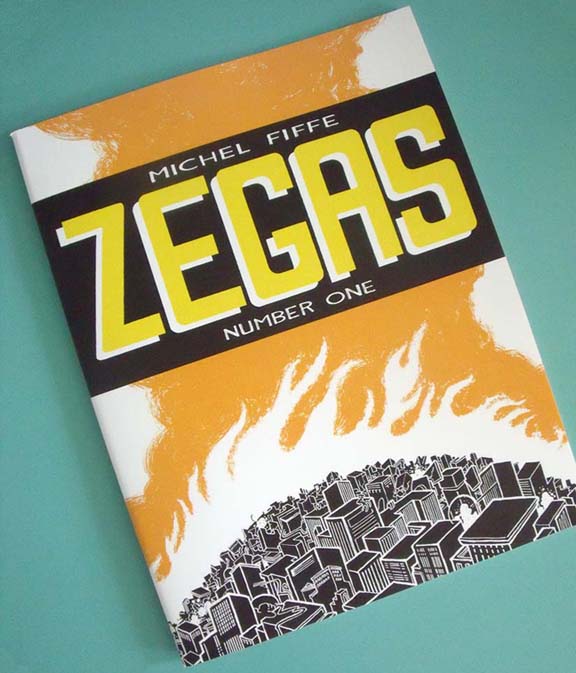 The response to Zegas #1 has been remarkably positive from all sorts of pockets of the comics world! A reminder: this self-published effort contains all-new material that cannot and will not be seen online in its entirety. I can hardly promise that it will be collected into trade form, either. This comic is specifically designed to be read page to page as a physical object, ideally on an issue-by-issue basis. Izzat cool witchu?

At the moment, it can be purchased from me through Etsy (many thanks to those of you who have done so) or support your local comic book shop by purchasing it through them, most notably Bergen Street Comics, Desert Island, Jim Hanley’s Universe, Big Planet Comics, Time Warp, Floating World, and Quimby’s. You can also find it in book stores such as BookCourt, P.S. Bookstore, and St. Mark’s Bookshop.

Zegas #1 was recently reviewed by Matthew J. Brady for his Warren Peace Sings the Blues blog. It’s always a pleasure to read his comics reviews and a thrill to carry a combative dialogue through message threads with him. Keep in mind that this is not the same Matt from Newsarama; this one likes cats.

Another review was by Matt Seneca for The Comics Journal. I’ve followed Matt’s comic, “Affected”, for a while and have enjoyed its formal boldness. Plus, it’s fun as fuck. Whether it be through Death to the Universe, Your Wednesday Sequence, or his Deathcast, Matt’s critical observations always cut straight to the bone and are worth your time.

Pop Dose just put up this review of Zegas #1 in Johnny Bacardi’s column, Confessions of a Comics Shop Junkie. Mr. Bacardi and I go way back, in that this interview of mine with Trevor Von Eeden wouldn’t have been possible without his help. It was through his Thriller website that I met Johnny, and I’ve been following his blog since. Do the same.

Since I’m a fan of the comics-making process, I thought I’d share a few brief examples of how I worked on certain aspects of Zegas #1. The way I make a comic page changes all the time, but below are the most typical steps I take. 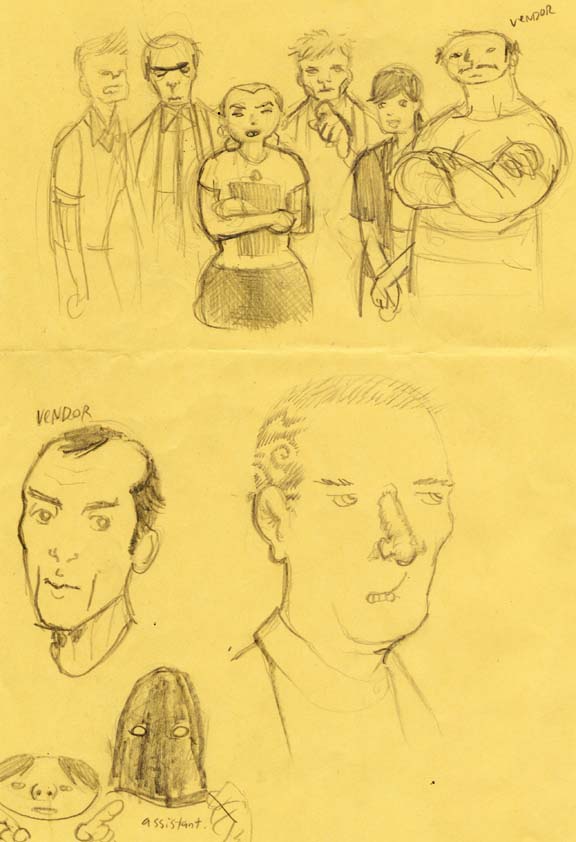 This issue contained a larger cast than I’m used to handling. I’ve gotten used to drawing the main characters, Emily & Boston, but I wasn’t sure how these other folks were gonna look. Thankfully, it didn’t take a slew of study sheets to nail them down. 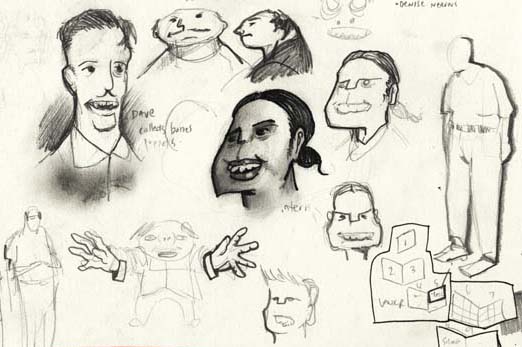 One panel, three samples: pencil, ink, and color. All by hand. 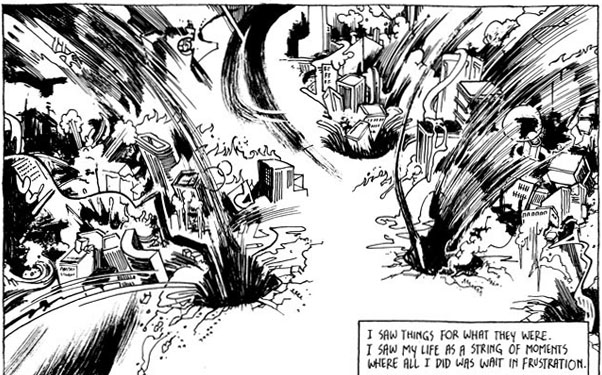 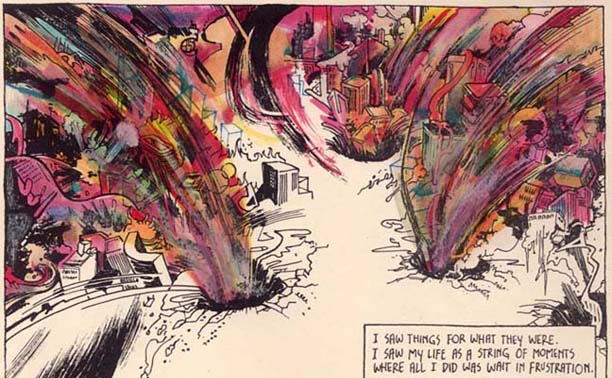 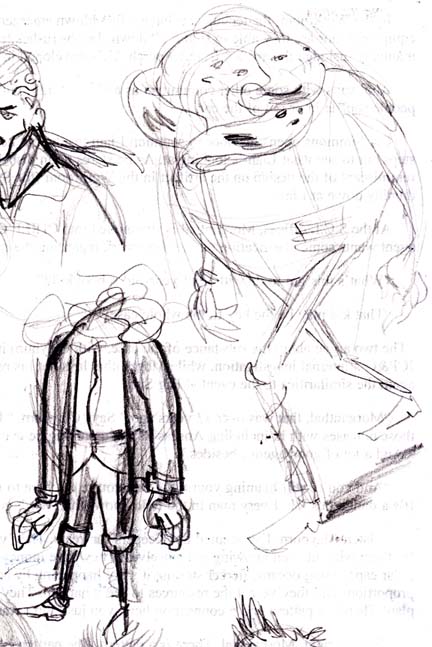 I knew I had to carefully stage this following splash page. Lots going on here, but the main concern was clearly portraying a sense of movement through a specific space. I liked the rough layout and tried to remain faithful to its foundation. 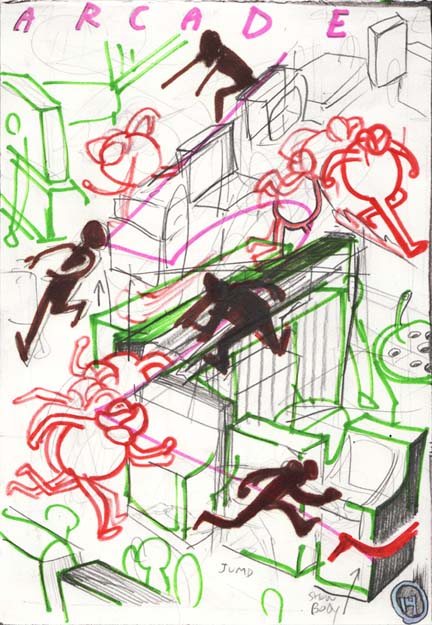 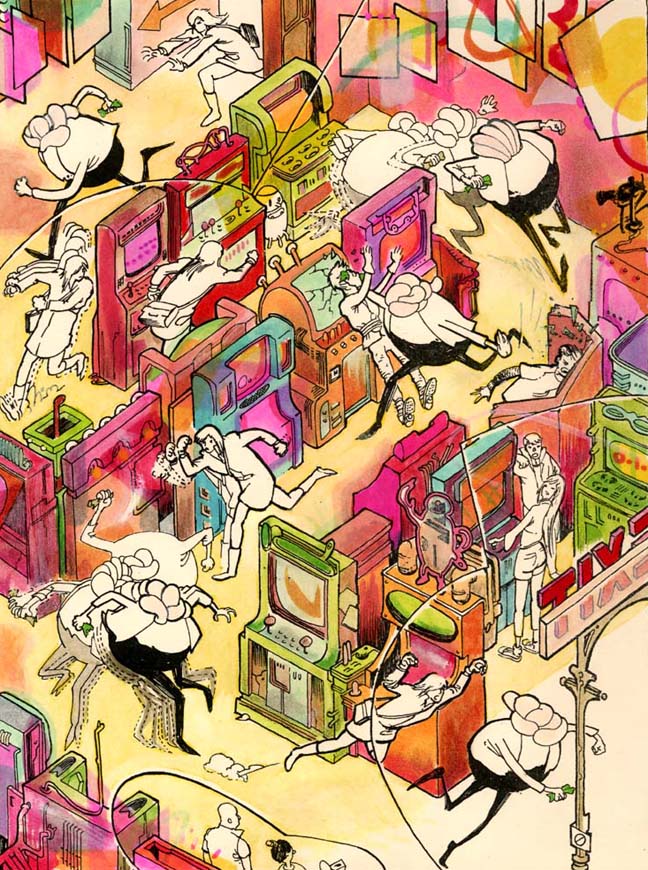 Writing comics has got to be one of the most difficult things I do throughout this entire process. Takes me forever, too. I write and re-write and edit the results while trying not to kill any initial spark they may have had. I’d hate to snuff out the spontaneity of any given scene, so I try not to overwork it.

As far as a “script” goes, I find that scribbling on any ol’ sheet of paper yields better results than typing. I can barely get a sense of how a comic will read any time I read a comic script, by anyone. This is how I’m most comfortable. 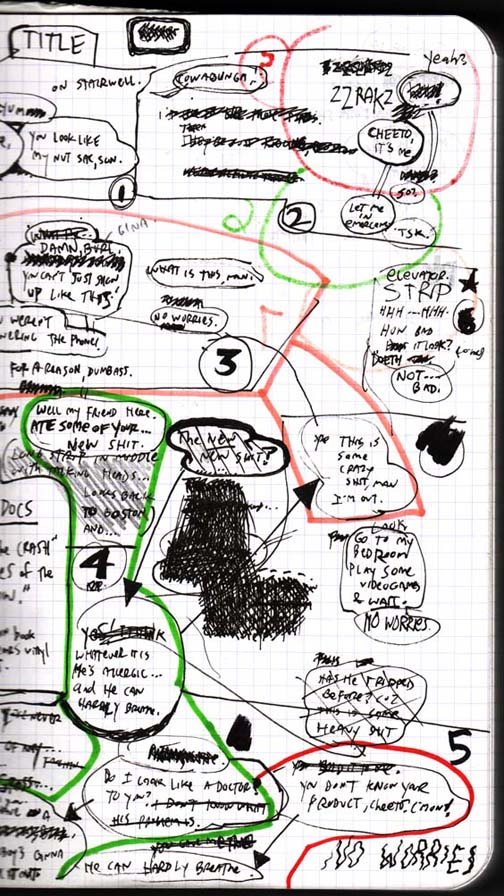 Here are a couple of layouts. 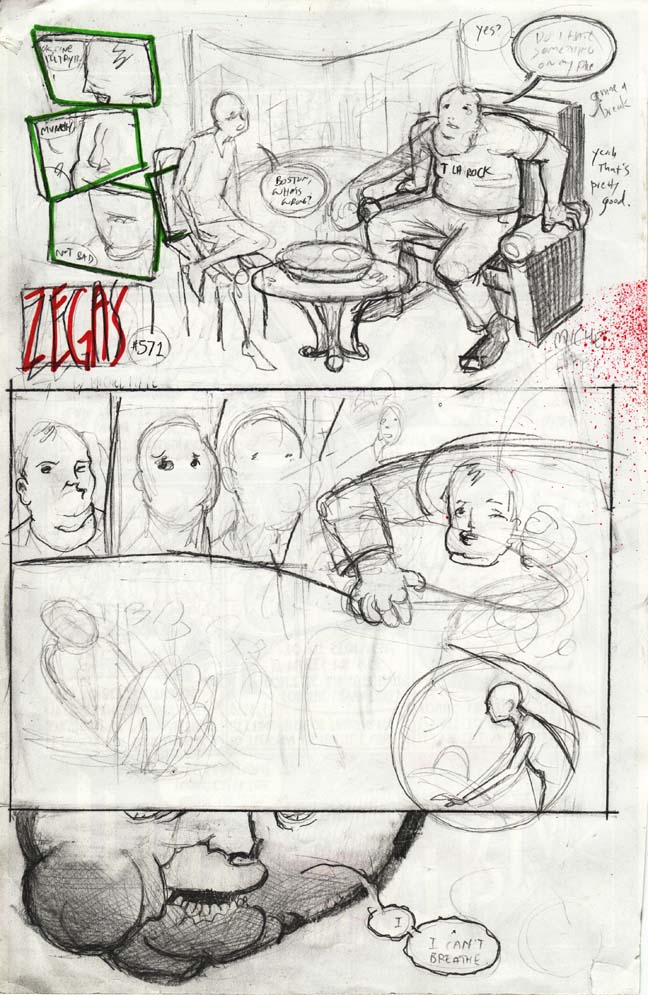 “Plum” is the only story that has portions of digital coloring. See those dot patterns down there? No, not the black dots, those are actual sticker sheets of Zip-A-Tone (running low, should scan). I mean the red and orange parts. Those are digital. It was fun to do, but I’d hate to color an entire comic like that. You start getting really hateful towards the end and you wish all color would disappear from the world. Maybe that’s just me. 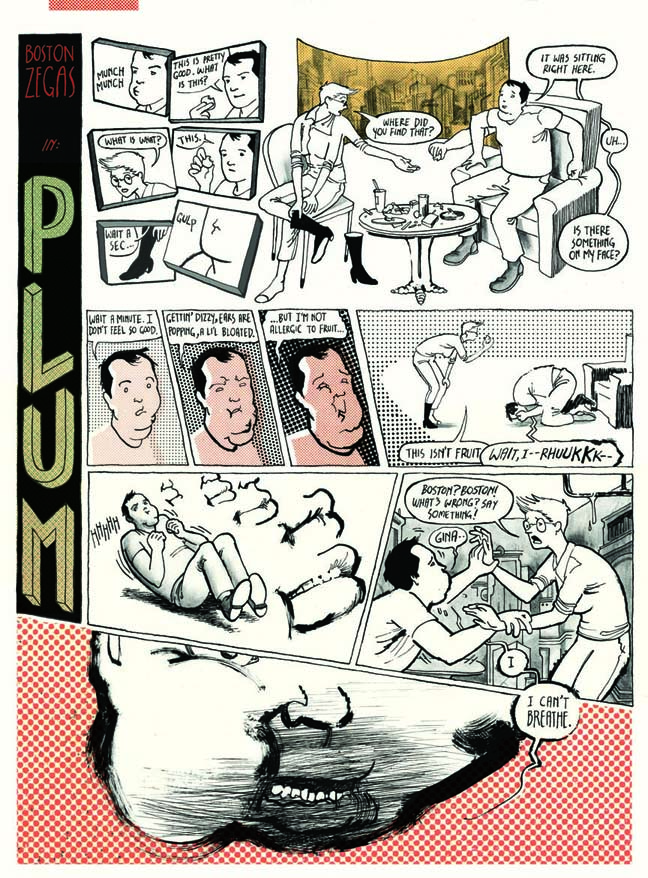 That’s the word on the first issue. The second issue is coming along and looking great. I’m not even that distracted by the sudden rush of accomplishment and adoration. Actually, I can’t work fast enough to get more Zegas issues out there, and I have all of you to thank. 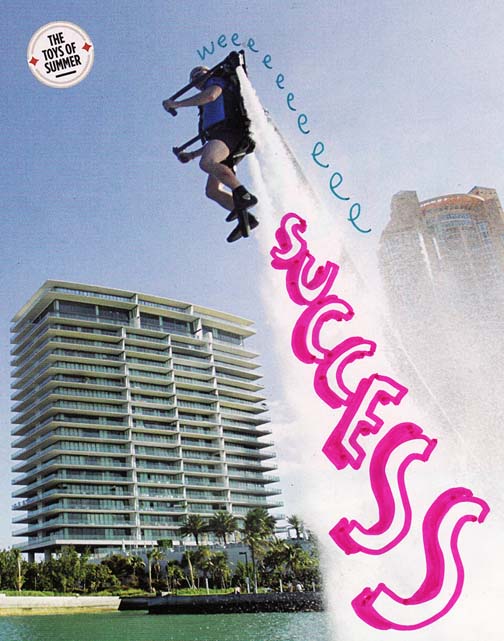 That big splash-chase page always takes a lot of looking at. Every time I see it I see something new. Woo!

Yeah, what Tim said. I still break into a big smile at that splash page.

And I totally agree that writing comics is hard as hell. I’m embarking on my first creator-owned venture and no matter how I try to get around it or avoid it, I have to write it.
I’ve tried to just start drawing it with the plot in my head, but that has been 2 false starts and absolutely disasterous. I don’t profess to be Alan Moore up in this piece, but even if I do have the story in my head, I’m realizing I need the ‘road map’ of a script to stay the course.

And now, I have a process question: What type of board/paper do you use? You’re getting this beautiful, craggy, drybrushed line that leads me to think you are using watercolor paper?

I don’t use watercolor paper, actually! I use the closest thing to bristol boards that the art store may have at any given time I make the trek there. As long as my nibs don’t bleed, I’m all good (except I’ve currently discovered that sometimes it’s the INK that can cause bleeding — never knew that!).

For the dry brush, I just have a few brushes that I’ve used and abused for years. I come down on them pretty hard sometimes, but I get the desired effect (I also don’t use TOO much ink while pressing down & fast).

Fantastic job -i need to get some money into my pay pal -or figure a way to get you $ so i can have a copy ov this incredible achievement. hope you still have a few -or at least one for me -seeing it’s been a year already 🙁

I have a few left, for sure. Especially for my favorite sub industrial nutrient!